Ok so below is an image showing the “new” and “old” object ID and timestamp format mongodb uses. Old is referring to the imported json data and new is referring to data i have created. 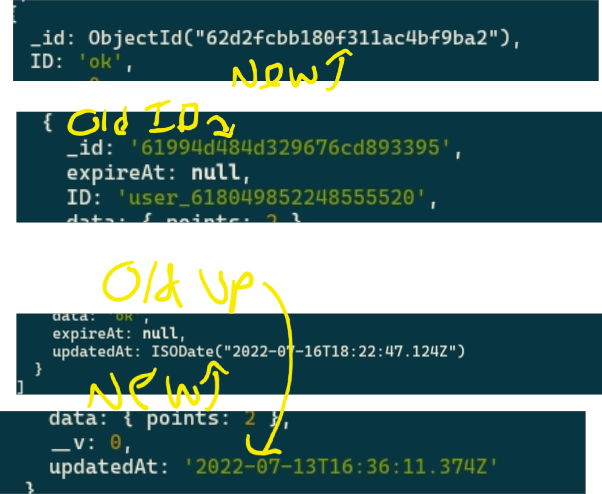 So i want to find a way to add those or import it such that it imports usable - and yes, I have already tried manually adding ISODate() and ObjectId then reimporting it to match the new data, that just throws JSON errors and doesnt properly import.

I imported a json file that contained my mongodb database using a mongoimport --collection jsons --jsonArray -d main -v databasemain.json command.
The old is the imported data new is created data
I cannot edit or add to the imported data

it would be better if you included those JSON error messages so to tell what is wrong.

_id field is not required to be a proper ObjectId to insert the data, as your updatedAt field not being a Date. it will just be a bit different to index that document. You may try importing your data to a temporary collection, then use other query methods to change these strings into proper ObjectId and Date formats to insert into a new collection, then drop the old one.

I fixed it by removing and reinserting all of the data