Confusion about future of MongoDB Realm and Stitch

We have a production app that is running on MongoDB Realm mainly using “mongodb-stitch-browser-sdk” & “mongodb-stitch-server-sdk”. Our entire team picked up MQL and we are quite comfortable with it.

With the new changes I see that “mongodb-stitch-browser-sdk” and the server side version is being called Legacy SDK. 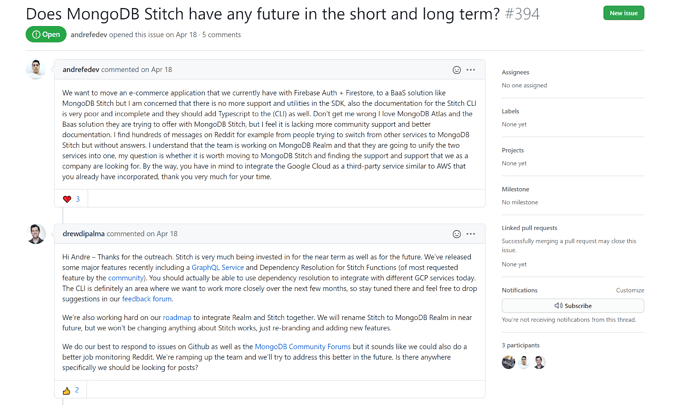 We invested some significant time on MongoDB Stitch learning, understanding the ins & outs and being comfortable with all the concepts hence we are really concerned with all the new but different information.

Looks like some of the docs content can be corrected, I’ll get folks working on that. To address your questions –

Ks support MQL. All features from the Stitch SDKs are either available or will be available shortly with the exception of 3rd party service

Thank you very much for further clarification. Is there a reference manual for Realm Web SDK? I see that the one in the docs is basic - it does not clearly show how to use MQL using the Web SDK. Is there any document or article that we can reference?

Hi – I believe you should be able to use the same JS SDK reference for Web/Server. You can also find an example here.

I share the same confusion as Salman with the SDKs and general roadmap for the merging of Stitch and Realm. I’m eager to use Mongo for my next project, however the mixed messaging on how to get started with the Web SDK is a barrier to adoption.

On one hand, the docs advise to use ‘realm-web’ (which is in line with the comments regarding EOL for the stitch-browser-sdk I’ve seen here and on Github), however, on the other hand, many of the example and demos provided by Mongo employees themselves are still referencing the old Stitch SDK(s) - e.g. the live coding YouTube video on Mongo’s official channel as of a week and a half ago.

I can appreciate that things are in flux with Stitch and Realm, and that it will take some time to get everything merged. In the meantime though, a little more attention on the docs and setting expectations on what’s to come would help my team feel more confident in going all in on Realm. Until then, Firebase is a tempting alternative (really hoping to stick with Mongo BaaS though).