It’s the holiday season and at MongoDB, we got to thinking about how efficiently Santa could deliver presents around the world. Visiting every Christmas-celebrating house in one night seems like a challenge, but none too big for an engineer.

We presented the below challenge in our MongoDB Advocacy Hub on the classic Traveling Salesperson problem. Given a set of geo coordinates, one for each of the 10 most populous urban areas on the planet, how would you find the shortest path the salesperson (or in this case, Santa) could use to reach each city? (To participate in our next our next challenge register for the Advocate Hub!)

We provided the following JSON dataset containing the 10 most populous cities, including the North Pole:

Congratulations to Dror Asaf for solving the traveling Santa challenge. Dror determined the correct path for Santa to take to reach the 10 most populous cities in the least distance required. 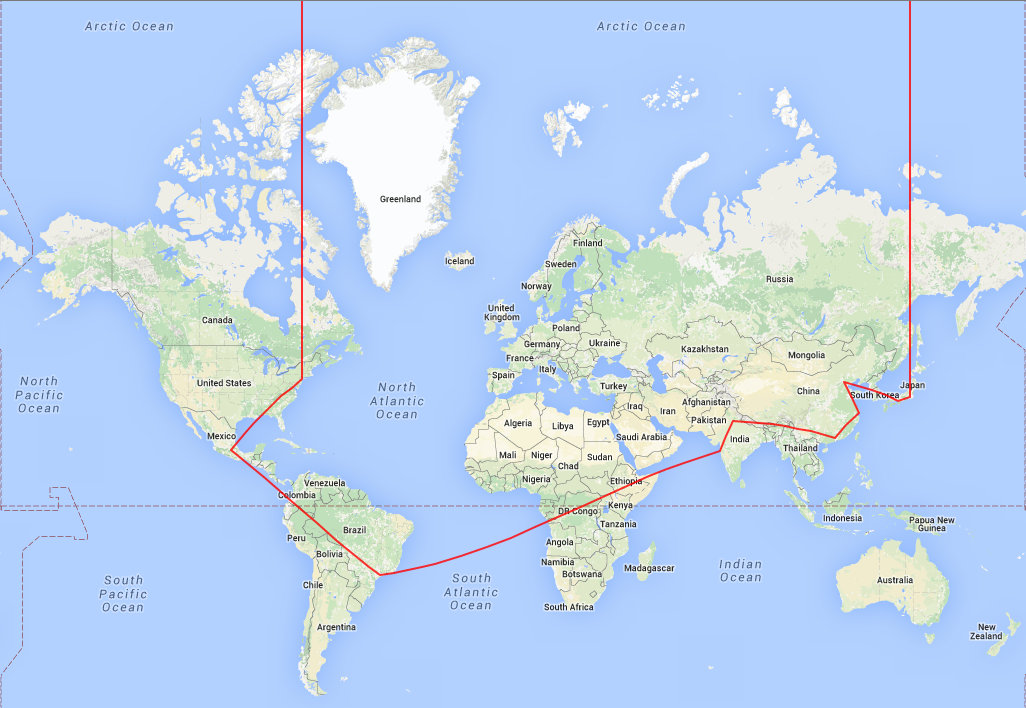 The order of cities visited is:

Dror’s methodology was pretty straightforward. Starting at the North Pole, Dror used MongoDB’s geospatial indexing and queries to select the next city to visit at each stage of the journey. Dror’s strategy finds the closest city to Santa’s current position and sets that city to visit next in Santa’s world tour.

You may notice that while this works for the set of cities in the challenge, a next-nearest-destination isn’t a general solution to the traveling Santa problem. I’ve described a general solution below. But before we get there I need to admit a mistake.

In the original data set I mistakenly assigned a negative latitude for the city of Osaka, Japan. Here’s the erroneous document:

Which would put Osaka at a location adjacent to Port Lincoln, Australia. Last time I checked, Osaka doesn’t go there. The correct latitude is 34.693889. Now, let’s take a closer look at the Traveling Santa problem to find a general solution.

How far from here to there?

The starting dataset I provided only included the the geo-coordinates of the cities. You, the participant, need to calculate the distances between the cities before you can actually solve the problem at hand. I included this additional twist in the problem to focus attention on a common snag when calculating distance between two points on a globe.

The wrong way to go from Honolulu to Tokyo 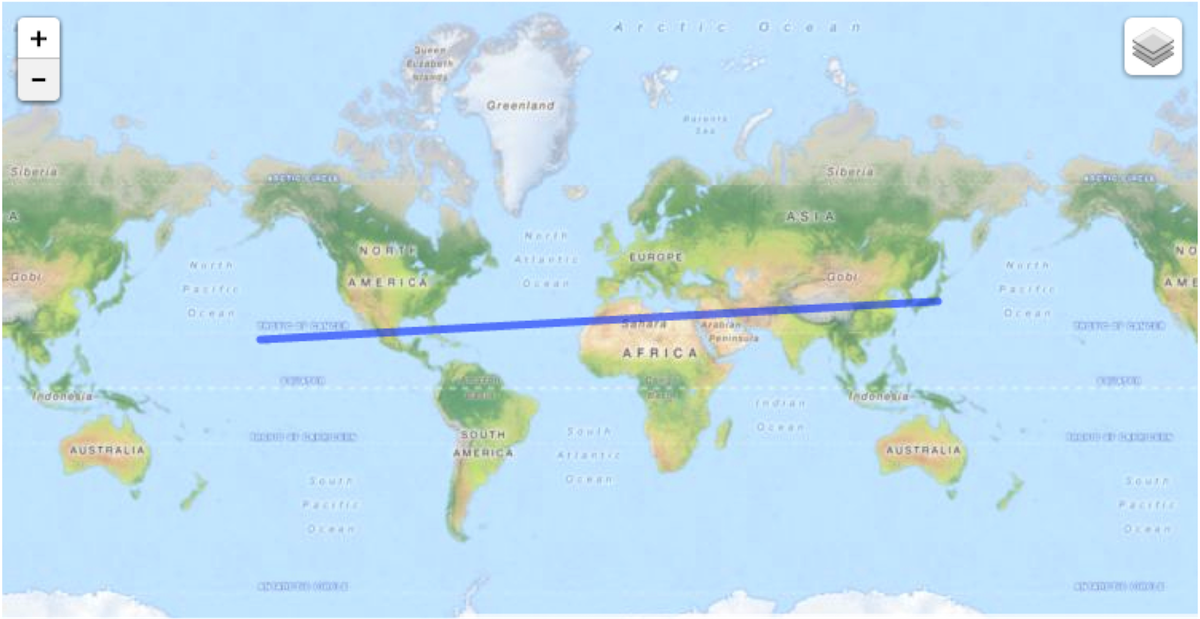 This mapping service pointed me in the wrong direction, going the long way around the planet. It did this because it models the Earth as a 2 dimensional surface with edges, just like a flat piece of paper. Its surprisingly common for databases that claim to support geospatial indexes to only expose 2D planes. In this model, the Earth is simply a flat plain over which we’ve imposed a coordinate system centered at latitude 0, longitude 0. Here’s a visualization of this 2D way of thinking, where the origin of the coordinate system is marked with the red dot and the edges of the Earth are marked with red lines. The edges of this model is the anti-meridian. 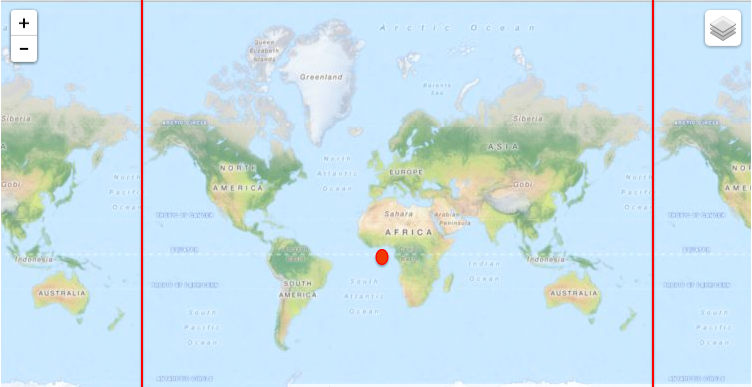 The Earth is of course not a flat plane but a 3 dimensional surface. So, we’ll need a way to calculate the distance between two points on a globe. This is called a haversine formula, and with this function we can derive the shortest distance between Honolulu and Tokyo.

The right way to Tokyo 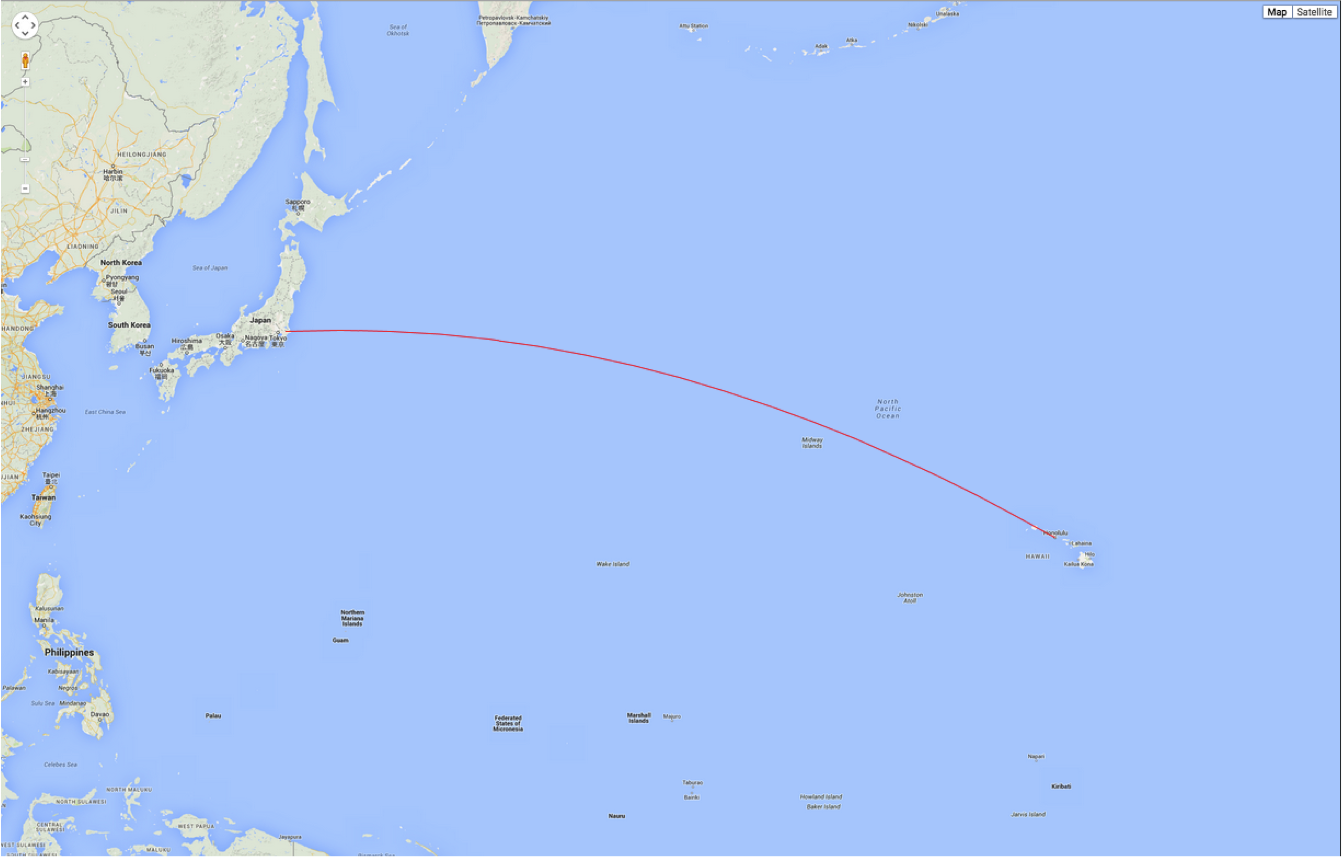 At this point I am ready to find the shortest path between the cities. I am going to use a recursive function to traverse each path and find the shortest among them. First I need an object to represent the path I am currently building / traversing. In JavaScript this object takes the following form:

To find the shortest path, starting at the North Pole, I initialize the Path object by plugging in the North Pole as the first city I have visited and then pass this initialized object to the recursive function ‘visit’.

The complete code solution is available here, and once complete I can assert that Santa’s best route to reach all 10 cities in the shortest time.

Very astute readers will see that that this is the same path as Dror’s solution, just traversed in reverse order. The “route” field in the document is a geojson formatted LineString I’ve added to the result document which was used to render the paths you see in the maps above.

Now, you may notice this is an exhaustive and brute force approach to solving a problem which is known to be more difficult to solve the more points you need to visit. This is why I limited the number of cities Santa would be visiting to 10. However, I can certainly think or a couple of optimizations which could be added to make my code even faster. I’d encourage you to take a look at the solution and make some suggestions in the comments below. Better yet, register in our Advocacy Hub, take part in the challenge with a gist of your own solution!

Bryan Reinero is US Developer Advocate at MongoDB fostering understanding and engagement in the community. Previously Bryan was a Senior Consulting Engineer at MongoDB, helping users optimize MongoDB for scale and performance and a contributor to the Java Driver for MongoDB.

Santa Claus and His Distributed Team

So here it comes again, that happy season when Santa visits and brings the presents that we've earned for being so "well behaved" throughout the year. Well&#x2026; it happens that there are a lot of requests (+6 billion of those!), requiring the Elves to build a very scalable system to support so many gift deliveries. Not only handling the total number of requests, but also the concentration of these requests around the holiday season. And of course, do not forget about the different types of websites that we need to build according to the regional variations of the requests (wool pajamas are likely to be requested next to the North Pole but not so much in the tropics!). To make sure that all requests are well served we need to have different applications serving this immense variability. Architecture design In order to deliver all presents in time for Christmas, Santa has asked Elf Chief Architect (ECA) to build a distributed, globally scalable platform so that regional Elves could build their apps to meet the needs of their local users. Apparently Elf Chief Architect has been attending several MongoDB Days Conferences and will certainly be attending MongoDB World , but one of the things that intrigued Elf Chief Architect was a talk around distributed container platforms supported by a MongoDB sharded cluster. Elf Chief Architect has a great deal of experience scaling databases using MongoDB, but the use of containers started gaining a lot of traction so he decided to give it a go. First thing that the ECA did was to deploy a container fleet on different data centers across the world: Schema design Using tag aware sharding, the Elfs team in Brazil can now build their app for South America with complete independence from the Japanese team //brazil team node.js focus on 4 languages portuguese spanish french dutch - yes, surinam and the duct antilles are located in SA! schema design for present requests { _id: "surf_board_12334244", color: "azul e amarelo", size: "M" present_for: "Ze Pequeno", address: { street: "Rua Noe 10", city: "Cidade de Deus" zip: "22773-410 - RJ", geo: { "type": "Point", "coordinates": [ -43.36263209581375, -22.949136390313374 ] } ... } //japan team ruby focus on 2 languages japanese english schema design for present requests { _id: { inc: 5535345, name: "Maneki Neko"} shape: "Round" receiver: "Shinobu Tsukasa", street: "〒東京都中央区 日本橋3-1-15, 1F", city: "Tokio" zip: "103-0027 - TK", position: { "type": "Point", "coordinates": [ 136.8573760986328, 35.14882797801035 ] } ... } As one can figure out from the above misaligned schema designs, the 2 teams have considerably different views on how to model some important base information. We start by the simple but quite important format of _id . On the Brazil team, a simple composed string would be enough to uniquely identify the intended gift while in Japan, they adopted a different strategy setting _id as a sub-document with 2 fields, incremental value ( inc ) and the name of the object ( name ). While both are valid MongoDB schemas,and can coexist the same collection (shared or not), this situation can cause some "interesting" side effects: more complex queries to find all intended elements index inefficiencies due to the multiple data types that we are indexing sorting issues ordering of keys in sub-documents will matter specific match criterion > db.test.find() { "_id" : { "a" : 1234, "b" : 5678 } } > db.test.find( { _id : { b : 5678, a : 1234 } } ) db.test.find( { _id : { a : 1234, b : 5678 } } )