MongoDB Atlas radically simplifies the operation of MongoDB. As with any hosted database as a service there are still decisions you need to take to ensure the best performance and availability for your application. This blog series provides a series of recommendations that will serve as a solid foundation for getting the most out of the MongoDB Atlas service.

If you want to get a head start and learn about all of these topics now, just go ahead and download the MongoDB Atlas Best Practices guide. 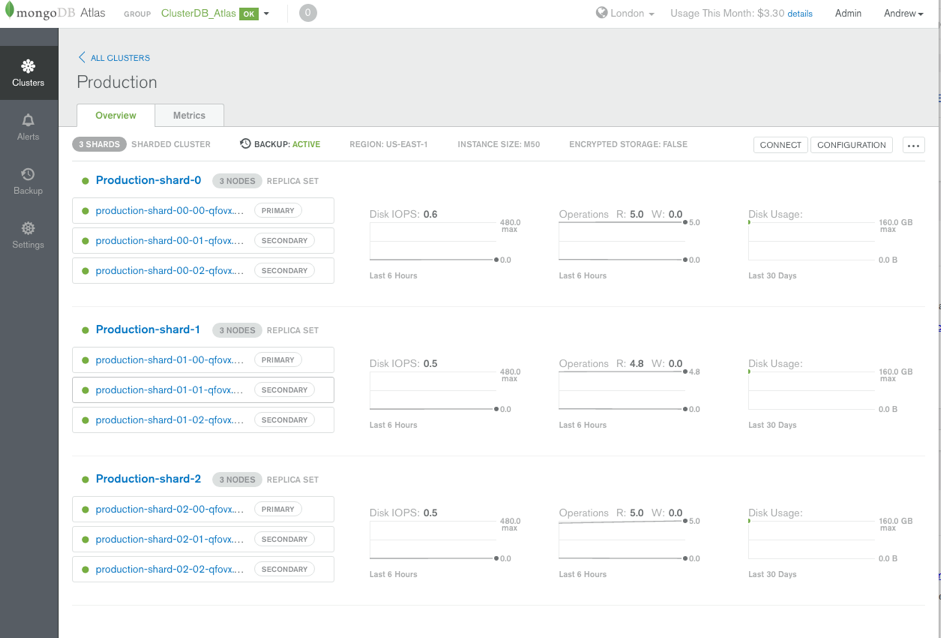 MongoDB Atlas provides horizontal scale-out for databases using a technique called sharding, which is transparent to applications. MongoDB distributes data across multiple Replica Sets called shards. With automatic balancing, MongoDB ensures data is equally distributed across shards as data volumes grow or the size of the cluster increases or decreases. Sharding allows MongoDB deployments to scale beyond the limitations of a single server, such as bottlenecks in RAM or disk I/O, without adding complexity to the application.

Users should consider deploying a sharded MongoDB Atlas cluster in the following situations:

Applications that meet these criteria, or that are likely to do so in the future, should be designed for sharding in advance rather than waiting until they have consumed available capacity. Applications that will eventually benefit from sharding should consider which collections they will want to shard and the corresponding shard keys when designing their data models. If a system has already reached or exceeded its capacity, it will be challenging to deploy sharding without impacting the application's performance.

Between 1 and 12 shards can be configured in MongoDB Atlas.

Users who choose to shard should consider the following best practices.

Select a good shard key: When selecting fields to use as a shard key, there are at least three key criteria to consider:

For more on selecting a shard key, see Considerations for Selecting Shard Keys.

Apply best practices for bulk inserts: Pre-split data into multiple chunks so that no balancing is required during the insert process. For more information see Create Chunks in a Sharded Cluster in the MongoDB Documentation.

Add capacity before it is needed: Cluster maintenance is lower risk and more simple to manage if capacity is added before the system is over utilized.

MongoDB maintains multiple copies of data, called replica sets, using native replication. Replica failover is fully automated in MongoDB, so it is not necessary to manually intervene to recover nodes in the event of a failure.

A replica set consists of multiple replica nodes. At any given time, one member acts as the primary replica and the other members act as secondary replicas. If the primary member fails for any reason (e.g., a failure of the host system), one of the secondary members is automatically elected to primary and begins to accept all writes; this is typically completed in 2 seconds or less and reads can optionally continue on the secondaries.

Sophisticated algorithms control the election process, ensuring only the most suitable secondary member is promoted to primary, and reducing the risk of unnecessary failovers (also known as "false positives"). The election algorithm processes a range of parameters including analysis of histories to identify those replica set members that have applied the most recent updates from the primary and heartbeat and connectivity status.

A larger number of replica nodes provide increased protection against database downtime in case of multiple machine failures. A MongoDB Atlas replica set can be configured with 3, 5, or 7 replicas. Replica set members are deployed across availability zones to avoid the failure of a data center interrupting service to the MongoDB Atlas cluster.

More information on replica sets can be found on the Replication MongoDB documentation page.

MongoDB allows administrators to specify the level of persistence guarantee when issuing writes to the database, which is called the write concern. The following options can be selected in the application code:

Reading from the primary replica is the default configuration as it guarantees consistency. Updates are typically replicated to secondaries quickly, depending on network latency. However, reads on the secondaries will not normally be consistent with reads on the primary. Note that the secondaries are not idle as they must process all writes replicated from the primary. To increase read capacity in your operational system consider sharding. Secondary reads can be useful for analytics and ETL applications as this approach will isolate traffic from operational workloads. You may choose to read from secondaries if your application can tolerate eventual consistency.

A very useful option is primaryPreferred, which issues reads to a secondary replica only if the primary is unavailable. This configuration allows for the continuous availability of reads during the short failover process.

For more on the subject of configurable reads, see the MongoDB Documentation page on replica set Read Preference.

That’s a wrap for part 3 of the MongoDB Atlas best practices blog series. In the final instalment, we’ll dive into best practices for operational management and ensuring data security

Remember, if you want to get a head start and learn about all of our recommendations now:

Avoiding the Dark Side of the Cloud: Platform Lock-In