As a top 10 global retail brand with 170+ million active buyers and 1 billion live listings across 190 markets around the world, eBay cannot afford systems downtime. This is why the company relies on MongoDB as one of its core enterprise data platform standards, powering multiple, customer-facing applications that run ebay.com.

Mr. Qu began his session discussing how the concept of availability has changed over the years. In the past, it was acceptable for sites to take scheduled downtime for weekly maintenance events. With the global nature of today’s services, neither users, or the business, are quite so accepting! In addition, most organizations now build out their services on commodity hardware platforms, rather than the exotic Sun Solaris / Sparc servers of yesteryear. While commodity hardware is much less costly, it also fails much more regularly. Both of these factors radically alter how engineering teams consider availability, and has led eBay to create its “Resiliency Design Patterns” to institute database best practices that maximize Mean Time To Failure (MTTF) and minimize Mean Time To Recovery (MTTR).

While all of eBay’s non-relational database choices offer built in resilience to failure, they make different design tradeoffs that can impact application behavior. The DBA team assesses these differences across six dimensions: availability, consistency, durability, recoverability, scalability, and performance. For example, those NoSQL databases using peer-to-peer, masterless designs have expensive data repair and rebalancing processes that must be initiated following a node failure. This rebalancing process impacts both application throughput and latency, and can cause connection stacking as clients wait for recovery, which can lead to application downtime. To mitigate these affects, eBay has had to layer an application-level sharding solution, originally developed for its Oracle estate, on top of those masterless databases. This approach enables the DBA team to divide larger clusters into a series of sub-clusters, which isolates rebalancing overhead to a smaller set of nodes, impacting just a subset of queries. It is against these different types of database behaviors that the eBay DBA team builds its Resiliency Design Patterns.

In this design pattern, a 7-node MongoDB replica set is distributed across eBay’s three US data centers. This pattern ensures that in the event of the primary data center failing, the database cluster can maintain availability by establishing a quorum between remaining data centers. MongoDB’s replica set members can be assigned election priorities that control which secondary members are considered as candidates for promotion in the event of a primary failure. For example, the nodes local to DC1 are prioritized for election if the primary replica set member fails. Only if the entire DC1 suffers an outage are the replica set members in DC2 considered for election, with the new primary member selected on the basis of which node has committed the most recent write operations. This design pattern can be extended by using MongoDB’s majority write concern to enable writes that are durable across data centers.

The standard MongoDB design pattern is used as the basis for eBay’s “Read Intensive / Highly Available Read Pattern” discussed in the presentation, which is used to power the eBay product catalog. For the catalog workload, the MongoDB replica set is scaled out to 50 members, providing massive data distribution for both read scalability and resilience.

For more write-intensive workloads, eBay has developed its “Extreme High Read / Write Pattern”, which distributes a sharded MongoDB cluster across its US data centers. 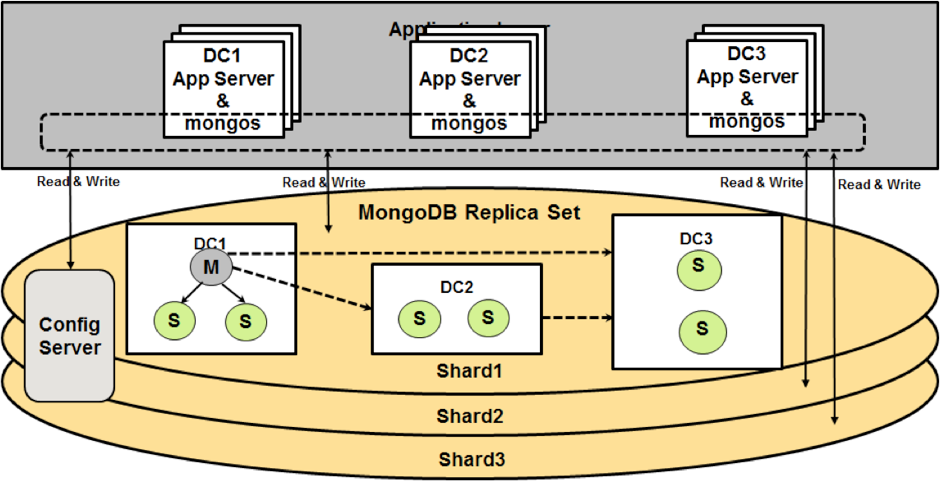 Again, eBay developers can configure this design pattern with specific MongoDB write and read concerns to tune the levels of durability and consistency that best meet the needs of different applications.

Mr. Qu noted that with recent product enhancements, MongoDB is being deployed to serve a greater range of application needs:

Welcome to the final installment of our 4-part blog series. In part 1 , we provided a primer into the GDPR – covering its rationale, and key measures In part 2 , we explored what the GDPR means for your data platform In part 3 , we discussed how MongoDB’s products and services can support you in your path to compliance Finally, in this part 4, we’re going to examine how the GDPR can help in customer experience, and provide a couple of case studies. If you can’t wait for all 4 parts of the series, but would rather get started now, download the complete GDPR: Impact to Your Data Management Landscape whitepaper today. Using the GDPR for Customer Experience Transformation As discussed in parts 1 and 2 of this blog series, to comply with the GDPR, organizations will need to identify all personal data within their systems. Forward-looking companies can leverage the regulations for personal data discovery processes to transform interactions with their customers. Marketing and sales groups have long seen the value in aggregating data from multiple, disconnected systems into a single, holistic, real-time representation of their customer. This single view can help in enhancing customer insight and intelligence – with the ability to better understand and predict customer preferences, behaviors, and needs. However, for many organizations, delivering a single view of the customer to the business has been elusive. Technology has been one limitation – for example, the rigid, tabular data model imposed by traditional relational databases inhibits the schema flexibility necessary to accommodate the diverse customer data sets contained in multiple source systems. But limitations extend beyond just the technology to include the business processes needed to deliver and maintain a single view. MongoDB has been used in many single view projects across enterprises of all sizes and industries. Through the best practices observed and institutionalized over the years, MongoDB has developed a repeatable, 10-step methodology to successfully delivering a single view. Figure 1:10-step methodology to building a single customer view with MongoDB You can learn more by downloading the MongoDB single view whitepaper , covering: The 10-step methodology to delivering a single view The required technology capabilities and tools to accelerate project delivery Case studies from customers who have built transformational single view applications on MongoDB Case Studies MongoDB has been downloaded over 30 million times and counts 50% of the Fortune 100 as commercial customers of MongoDB’s products and services. Among the Fortune 500 and Global 500, MongoDB customers include: 40 of the top financial services institutions 15 of the top retailers 15 of the top telcos 15 of the top healthcare companies 10 of the top media and entertainment companies MongoDB is used by enterprises of all sizes, and from all industries to build modern applications, often as part of digital transformation initiatives in the cloud. An example of such a company is Estates Gazette, the UK’s leading commercial property data service. Estates Gazette (EG) The company’s business was built on print media, with the Estates Gazette journal serving as the authoritative source on commercial property across the UK for well over a century. Back in the 1990s, the company was quick to identify the disruptive potential of the Internet, embracing it as a new channel for information distribution. Pairing its rich catalog of property data and market intelligence with new data sources from mobile and location services – and the ability to run sophisticated analytics across all of it in the cloud – the company is now accelerating its move into enriched market insights, complemented with decision support systems. To power its digital transformation, Estates Gazette migrated from legacy relational databases to MongoDB, running an event-driven architecture and microservices, deployed to the Amazon Web Services (AWS) cloud. The company is also using MongoDB Enterprise Advanced with the Encrypted storage engine to extend its security profile, and prepare for the EU GDPR. You can learn more by reading the Estates Gazette case study . Leading European Retailer As part of its ongoing digital transformation that extends customer engagement beyond brick and mortar stores to mobile channels, the retailer with over 50,000 employees and €4.5bn in annual sales, was building a new mobile app offering opt-in marketing services to collect customer data, storing it in MongoDB. As part of its GDPR readiness, the retailer employed MongoDB Global Consulting Services to advise on data protection best practices, taking advantage of the MongoDB Enterprise Advanced access controls, encryption, and auditing framework. By using MongoDB consultants in the design phase of the project, the retailer has been able to adopt a “security by design and by default” approach, while enhancing its security posture. Wrapping Up our 4-Part Blog Series That wraps up the final part of our 4-part blog series. If you want to read the entire series in one place, download the complete GDPR: Impact to Your Data Management Landscape whitepaper today. It’s worth remembering that it takes much more than security controls of a database to achieve GDPR compliance. However, MongoDB is offering a holistic vision of how database customers can accelerate a path to meeting regulations scheduled for enforcement from May 2018. Using the advanced security features available in MongoDB Enterprise Advanced and the MongoDB Atlas managed database service, organizations have extensive capabilities to implement the data discovery, defense, and detection requirements demanded by the GDPR. Methodologies used in successfully delivering customer single view projects can be used to support data discovery, and used to innovate in delivering a differentiated customer experience. Disclaimer For a full description of the GDPR’s regulations, roles, and responsibilities, it is recommended that readers refer to the text of the GDPR (Regulation (EU) 2016/679), available from the Official Journal of the European Union , and refer to legal counsel for the interpretation of how the regulations apply to their organization. Further, in order to effectively achieve the functionality described in this blog series, it is critical to ensure that the database is implemented according to the specifications and instructions detailed in the MongoDB security documentation . Readers should consider engaging MongoDB Global Consulting Services to assist with implementation.