Any logged in user may become the active user without re-authenticating. Depending on your app, this may be a security vulnerability. For example, a user on a shared device may switch to a coworker's logged in account without providing their credentials or requiring their explicit permission. If your application requires stricter authentication, avoid switching between users and prefer to explicitly log the active user out before authenticating another user.

When a user first logs in through a Realm SDK on a given device or browser, the SDK saves the user's information and keeps track of the user's state on the device. The user's data remains on the device, even if they log out, unless you actively remove the user.

The following states describe an on-device user at any given time:

The following diagram shows how users within a Realm client app transition between states when certain events occur: 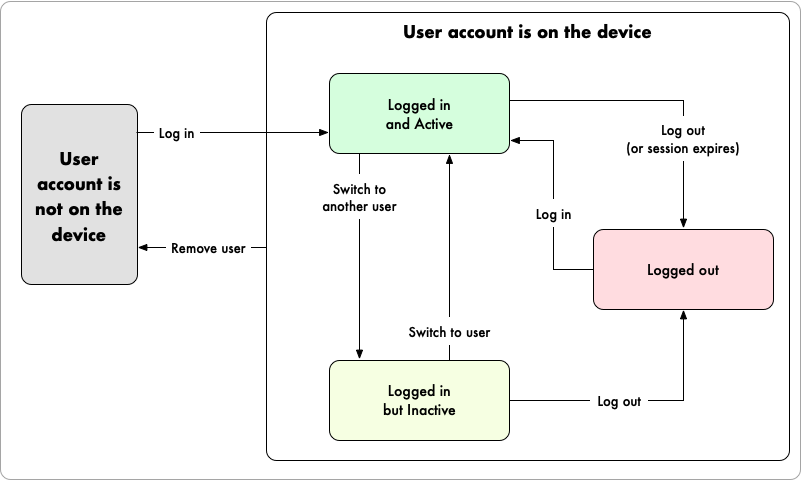 Add a New User to the Device

The Realm SDK automatically adds users to a device when they log in for the first time on that device. When a user logs in, they immediately become the application's active user.

In the example below, a developer prints out all the logged-in users on the device by looping through Realm.App.allUsers.

Remove a User from the Device

You can remove all information about a user from the device and automatically log the user out.

In the example below, the current user is removed from the device using the Realm.App.removeUser() method.

You can quickly switch an app's active user to another logged-in user at any time.