Realm is an open-source, easy-to-use local database that helps mobile developers to build better apps, faster. It offers a data synchronization service—MongoDB Realm Sync—that makes it simple to move data between the client and MongoDB Atlas on the back end. Using Realm can save you from writing thousands of lines of code, and offers an intuitive way to work with your data.

The Ionic team posted a fantastic article on how you can use Ionic with Realm to build a React Web app quickly, taking advantage of Realm to easily persist your data in a MongoDB Atlas Database.

After cloning the repo and running ionic serve, you'll have a really simple task management web application. You can register (using any user/password combination, Realm takes care of your onboarding needs). You can log in, have a look at your tasks, and add new tasks.

Let’s build on what the Ionic team created for the web, and expand it by building a mobile app for iOS and Android using one of the best features Ionic has: the “Write Once, Run Anywhere” approach to coding. I’ll start with an iOS app.

Once your APP_ID is set, run:

To add iOS capabilities to our existing app, we need to open a terminal and run:

This will create the iOS Xcode Project native developers know and love, with the code from our Ionic app. I ran into a problem doing that and it was that the version of Capacitor used in the repo was 3.1.2, but for iOS, I needed at least 3.2.0. So, I just changed package.json and ran npm install to update Capacitor.

Now we have a new ios directory. If we enter that folder, we’ll see an App directory that has a CocoaPods-powered iOS app. To run this iOS app, we need to:

That’s it. Apart from updating Capacitor, we only needed to run one command to get our Ionic web project running on iOS!

How hard can it be to build our Ionic app for Android now that we have done it for iOS? Well, it turns out to be super-simple. Just cd back to the root of the project and type in a terminal:

This will create the Android project. Once has finished, launch your app using:

In this case, 10.0.1.81 is my own IP address. As you can see, if you have more than one Emulator or even a plugged-in Android phone, you can select where you want to run the Ionic app.

Once running, you can register, log in, and add tasks in Android, just like you can do in the web and iOS apps.

The best part is that thanks to the synchronization happening in the MongoDB Realm app, every time we add a new task locally, it gets uploaded to the cloud to a MongoDB Atlas database behind the scenes. And all other apps accessing the same MongoDB Realm app can show that data! 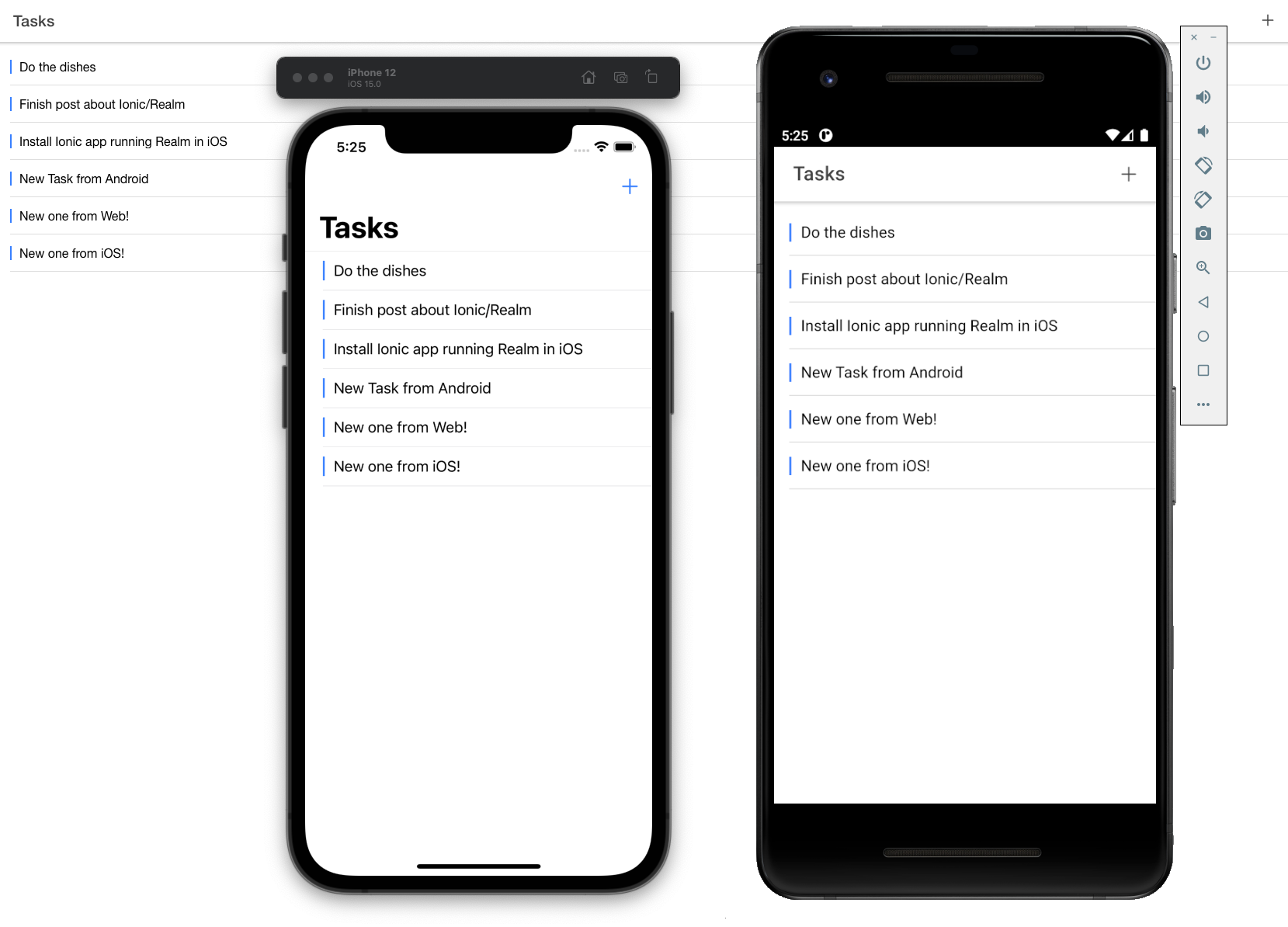 Realm SDKs are well known for their syncing capabilities. You change something in the server, or in one app, and other users with access to the same data will see the changes almost immediately. You don’t have to worry about invalidating caches, writing complex networking/multithreading code that runs in the background, listening to silent push notifications, etc. MongoDB Realm takes care of all that for you.

But in this example, we access data using the Apollo GraphQL Client for React. Using this client, we can log into our Realm app and run GraphQL Queries—although as designed for the web, we don’t have access to the hard drive to store a .realm file. It’s just a simpler way to use the otherwise awesome Apollo GraphQL Client with Realm, so we don’t have synchronization implemented. But luckily, Apollo GraphQL queries can automatically refresh themselves just passing a pollInterval argument. I told you it was awesome. You set the time interval in milliseconds to refresh the data.

So, in useTasks.ts, our function to get all tasks will look like this, auto-refreshing our data every half second.

Adding automatic refresh is nice, but in mobile apps, we’re used to also refreshing lists of data just by pulling them. To get this, we’ll need to add the Ionic component IonRefresher to our Home component:

As we can see, an IonRefresher component will add the pull-to-refresh functionality with an included loading indicator tailored for each platform.

To refresh, we call doRefresh and there, we just reload the whole page.

Right now, we can swipe tasks from right to left to change the status of our tasks. But I wanted to also add a left to right swipe so we can delete tasks. We just need to add the swiping control to the already existing IonItemSliding control. In this case, we want a swipe from the start of the control. This way, we avoid any ambiguities with right-to-left vs. left-to-right languages. When the user taps on the new “Delete” button (which will appear red as we’re using the danger color), deleteTaskSelected is called.

To delete the task, we use a GraphQL mutation defined in useTaskMutations.ts:

In this post, we’ve seen how easy it is to start with an Ionic React web application and, with only a few lines of code, turn it into a mobile app running on iOS and Android. Then, we easily added some functionality to the three apps at the same time. Ionic makes it super simple to run your Realm-powered apps everywhere!

You can check out the code from this post in this branch of the repo, just by typing:

But this is not the only way to integrate Realm in your Ionic apps. Using Capacitor and our native SDKs, we’ll show you how to use Realm from Ionic in a future follow-up post.