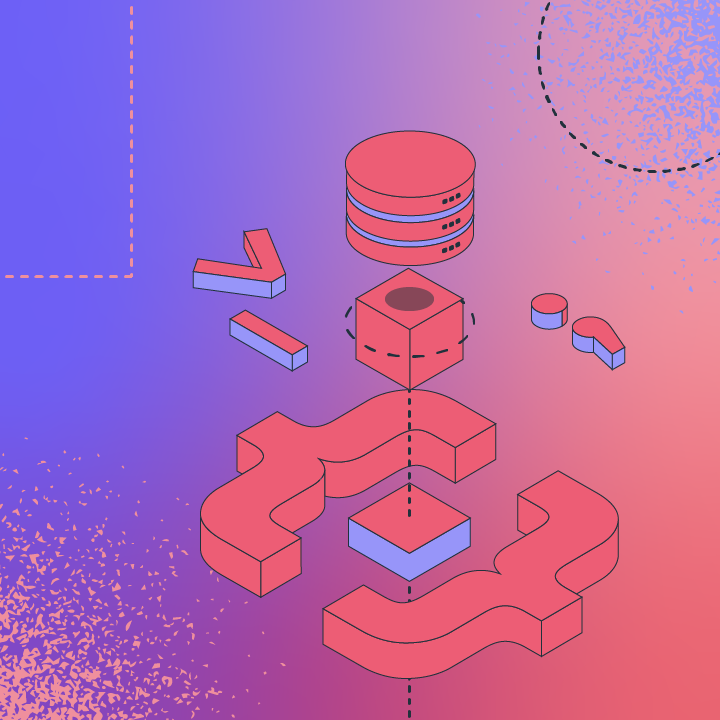 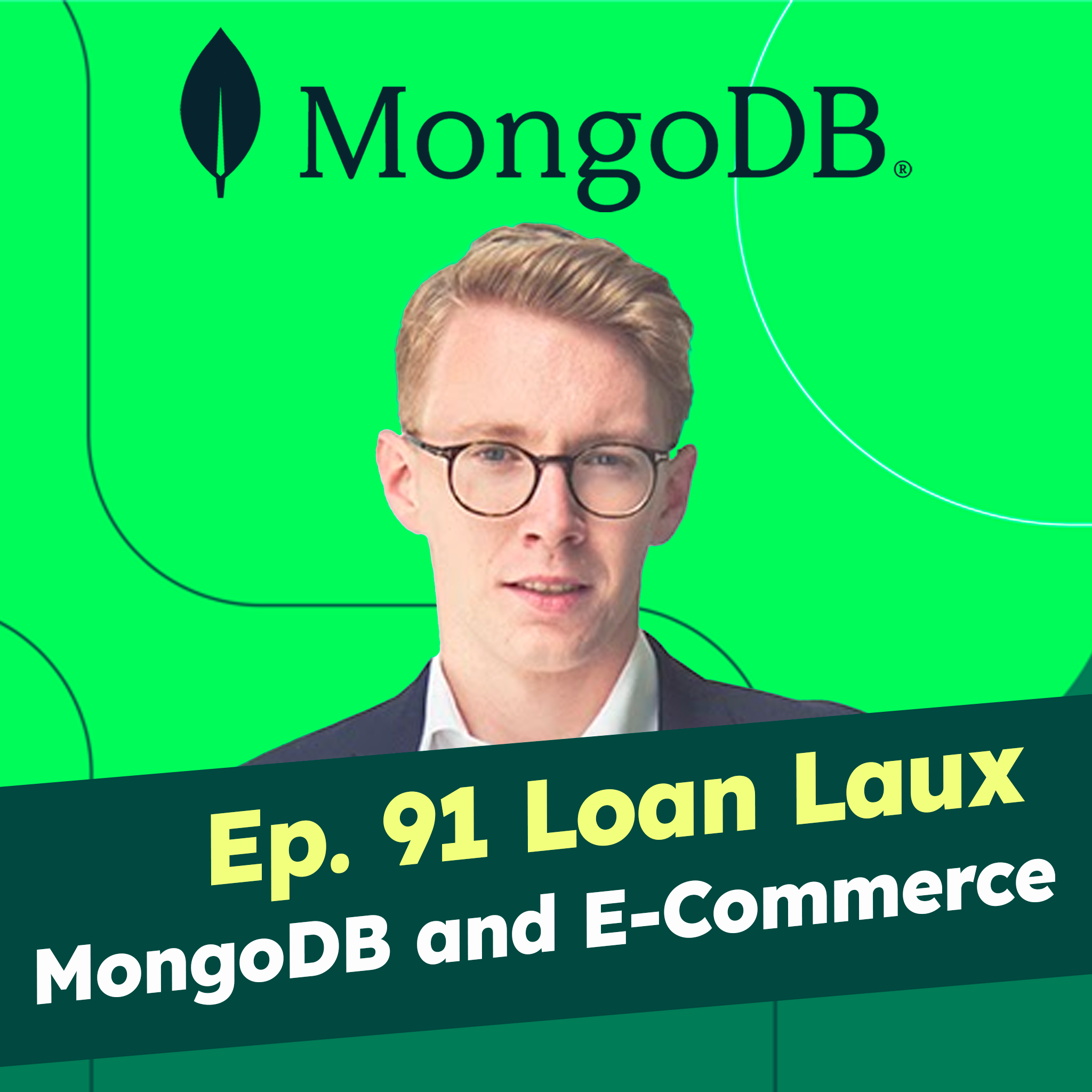 With Black Friday upon us, let's take this opportunity to focus on solutions in the retail and E-Commerce space. Loan Laux is a freelance developer, and the founder of out:grow, an E-Commerce Agency specializing in helping retailers grow, and migrate to more efficient technology solutions. Loan shares the story of his journey as a developer, as a founder and why MongoDB is an essential and efficient part of the modern E-Commerce technology stack.  To contact Loan, send him an email: llaux@trellis.co You will reach Loan on Twitter at https://twitter.com/loanlaux Be sure to stop by the MongoDB Booth at AWS re:Invent. 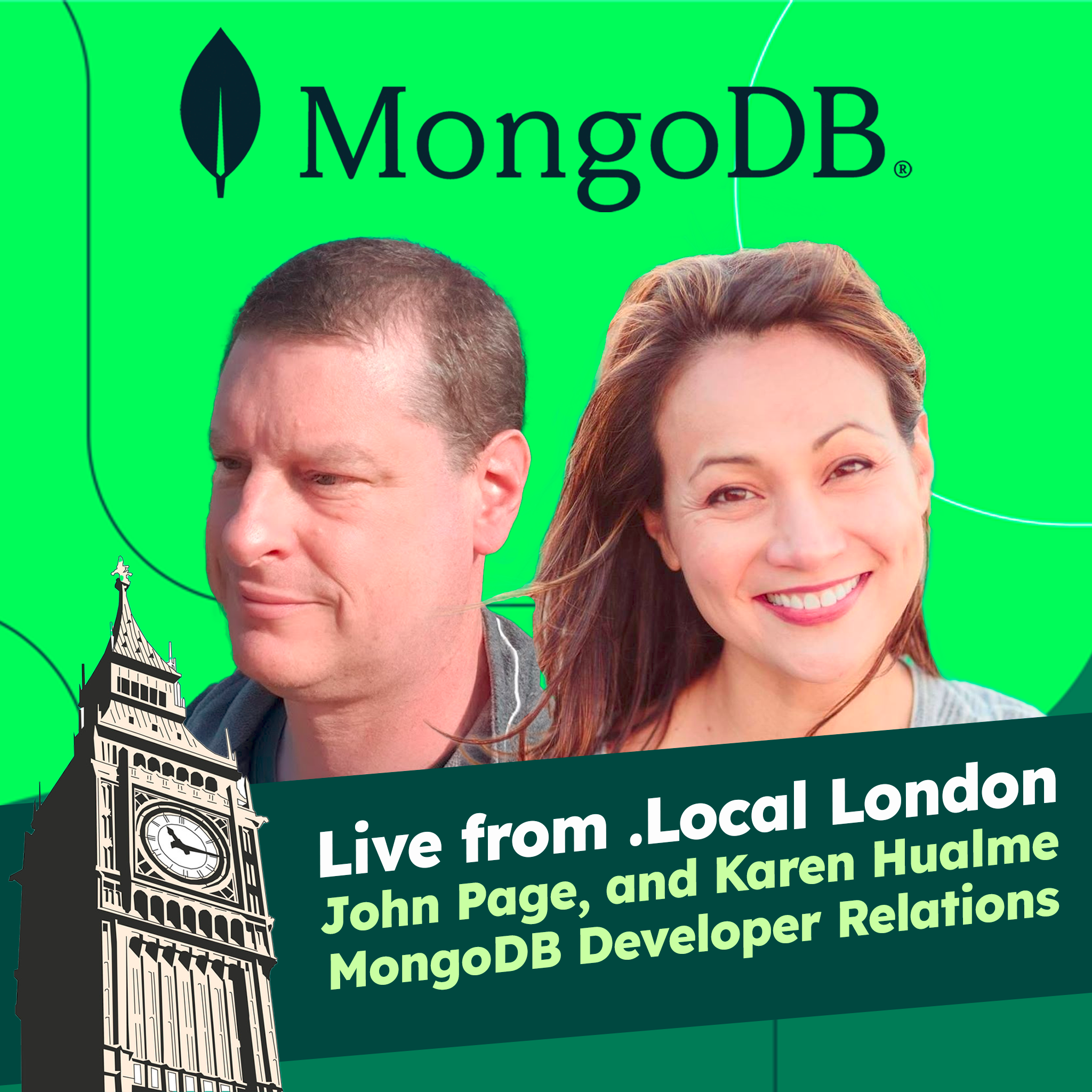 MongoDB .Local is a great conference concept featuring uniquely hybrid offerings including education, keynotes and product updates, and entertainment curated for those joining live in person, live from home, or on-demand. The latest .Local was held on November 9th, 2021 at Evolution, London. In this episode, Karen Hualme joins the growing ranks of MongoDB Podcast guests and shares her experience as a Principal Developer Advocate. Next, John Page stops by to talk about his favorite announcements from the conference and to share details of the amazing projects he's working on for the MongoDB Community. This episode was brought to you, in part by the MongoDB Engineering team. We're hiring! If you've thought about joining the team that's working hard to improve on the best data platform on the planet, visit https://bit.ly/mongodbengineering to find out more information and apply.  MongoDB Conferences are a great way to connect with the community, learn from others doing what you're doing and they provide a great opportunity to share what you know. MongoDB World Call for Speakers is open! If you want to learn more about speaking at a MongoDB Conference, visit https://bit.ly/speakatworld. If you're concerned that you might not be ready, be sure to check out Episode 75 of this podcast to learn all about the MongoDB Speaker Program. 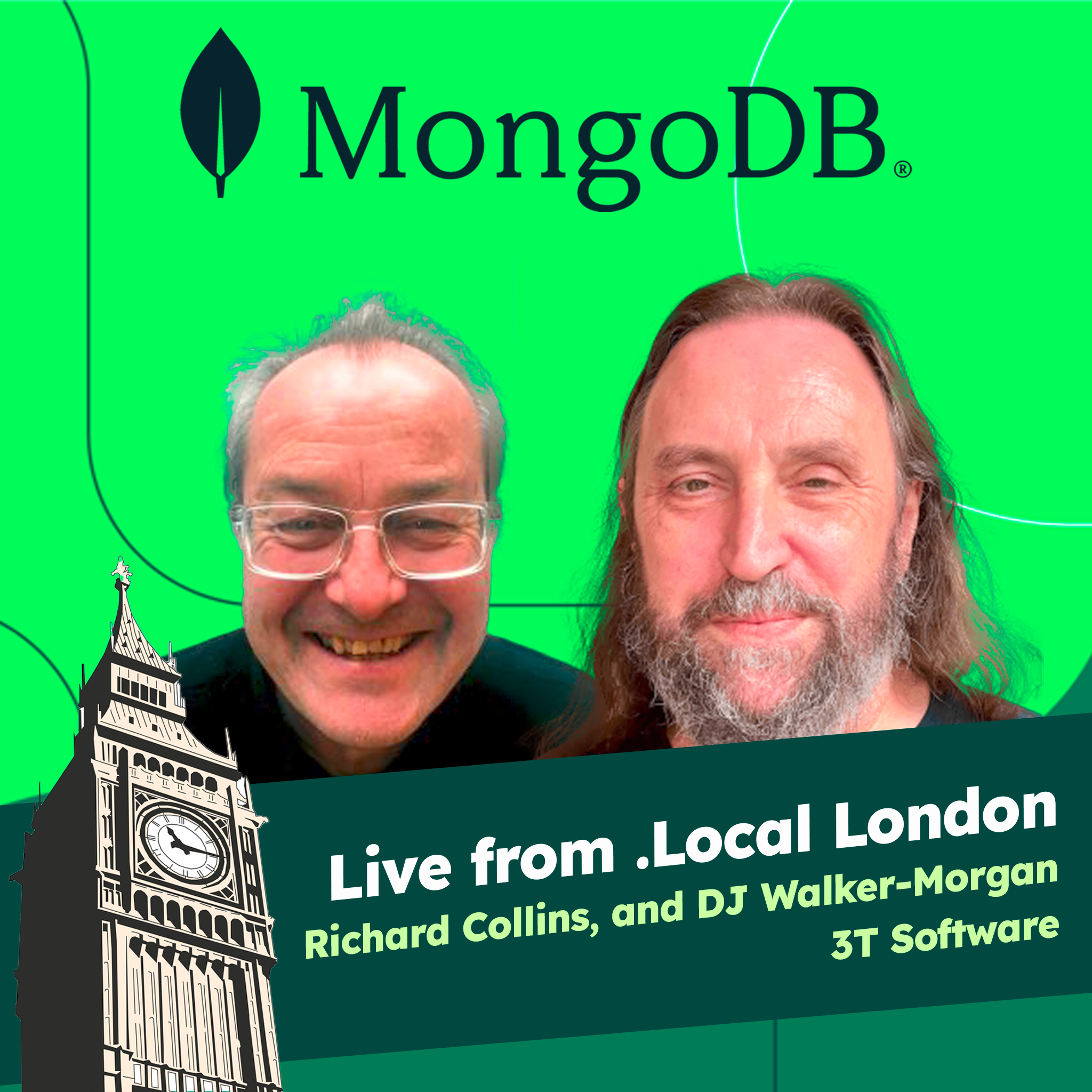 MongoDB .Local is a great conference concept featuring uniquely hybrid offerings including education, keynotes and product updates, and entertainment curated for those joining live in person, live from home, or on-demand. The latest .Local was held on November 9th, 2021 at Evolution, London. In this episode we chat with Richard Collins, CMO and DJ Walker-Morgan of 3T Software - makers of Studio3T. Studio 3T is the professional IDE, client, and GUI for MongoDB. The right tools to get more done in MongoDB – on Atlas or anywhere. To try Studio 3T for free, visit https://studio3t.com/download/ 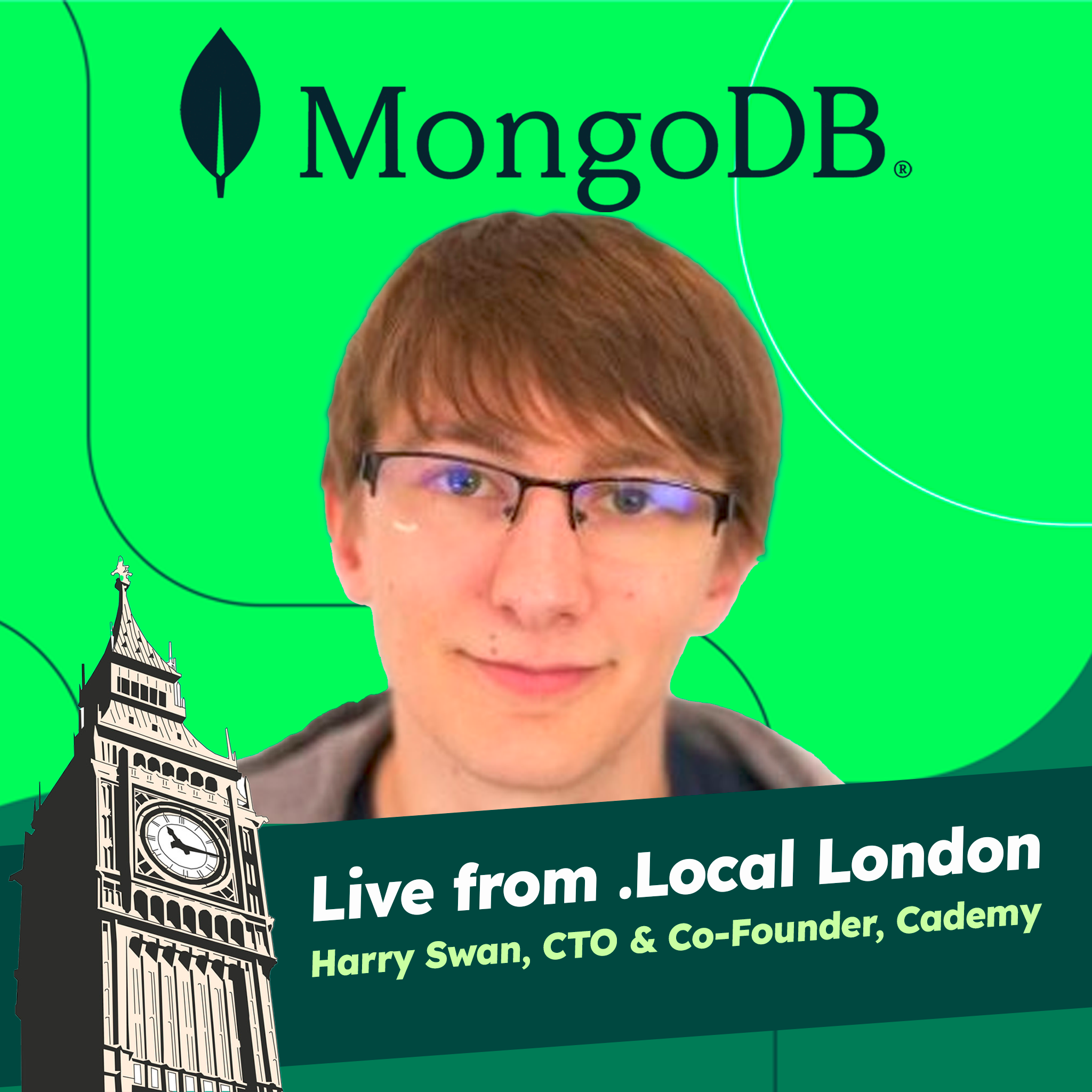 Cademy is a hyper-local educator marketplace that enables content and course creators to more easily administer and market their courses. Reducing the time and effort spent on admin so they can focus on what truly matters - teaching and making your students happy!  Harry Swan is the CTO, and Co-founder of Cademy. He stopped by the podcast booth at MongoDB .Local London to share details of his journey with MongoDB and his thoughts on some of the latest innovations presented at the conference. 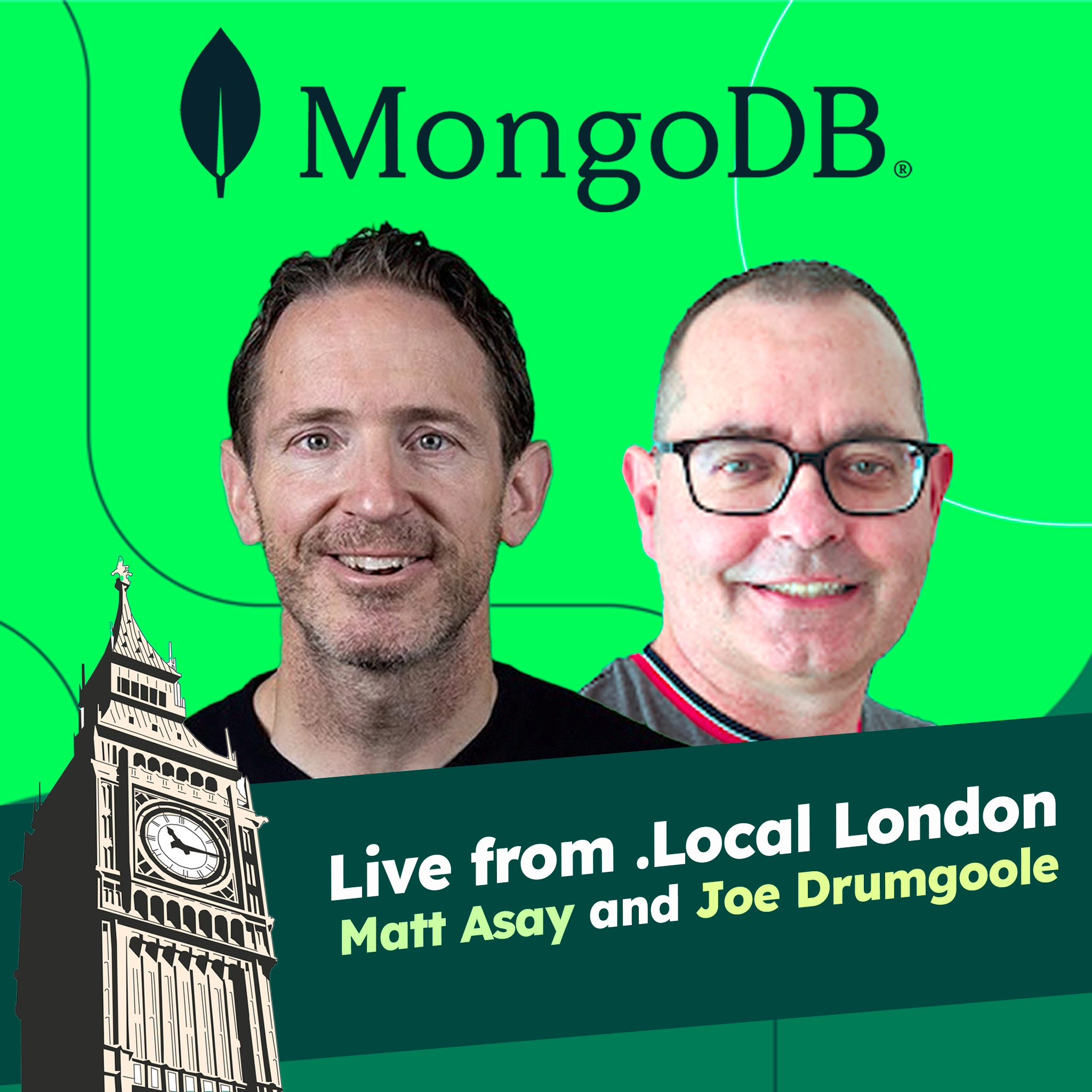 MongoDB .Local is a great conference concept featuring uniquely hybrid offerings including education, keynotes and product updates, and entertainment curated for those joining live in person, live from home, or on-demand. The latest .Local was held on November 9th, 2021 at Evolution, London. In this, the first in a series episodes recorded live at the event, we chat with two industry veterans, Matt Asay, and Joe Drumgoole.  Matt and Joe share their experience as long time (and in Matt's case, returning) MongoDB employees as well as their thoughts on the latest announcements from the event. 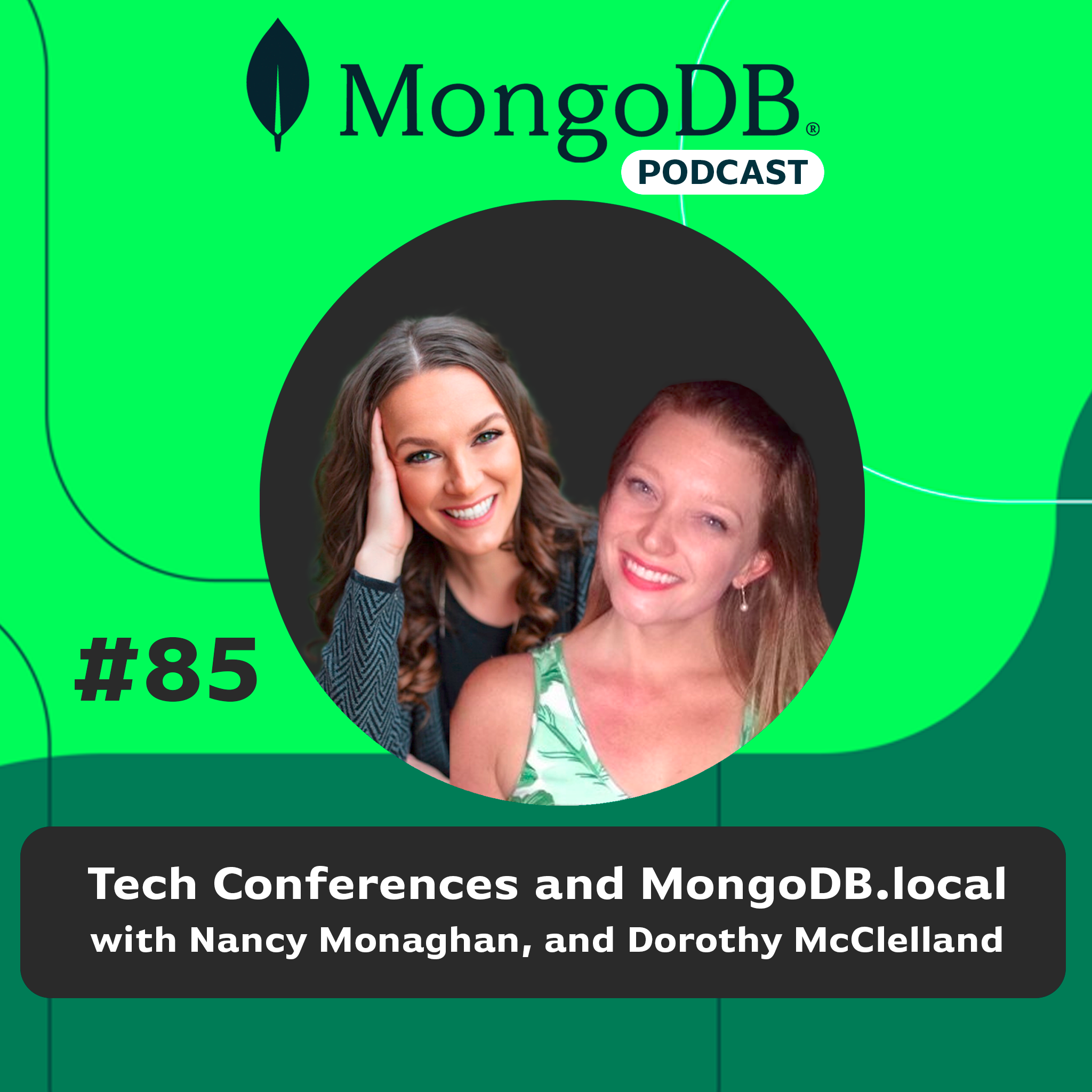 Here we are in November of 2021. The pandemic continues to impact the way we’re all working, doing business and connecting with other people. One powerful way that technologists from all industries have connected is through attendance at conferences. I’m no different… I find attending a good tech conference to be a valuable part of my continuing education. From large scale conferences like the Consumer Electronics Show, and AWS Re:invent, to language-aligned conferences like Gophercon, and PyCon. I go because it’s an opportunity to meet professionals and gain valuable perspective… and learn about the latest updates from vendors and technology providers.  On today's episode, we’re focusing on Tech Events and Conferences and to help guide a discussion about this and about the changing landscape of tech events throughout the pandemic, I’ve invited two of my highly esteemed colleagues from MongoDB’s amazing Events Management team… Nancy Monaghan and Dorothy McClelland.  If you’re a technologist interested in the new and exciting ways, we at MongoDB are approaching hybrid conferences or if you’re considering changes to the way you run and host events, this episode is for you. 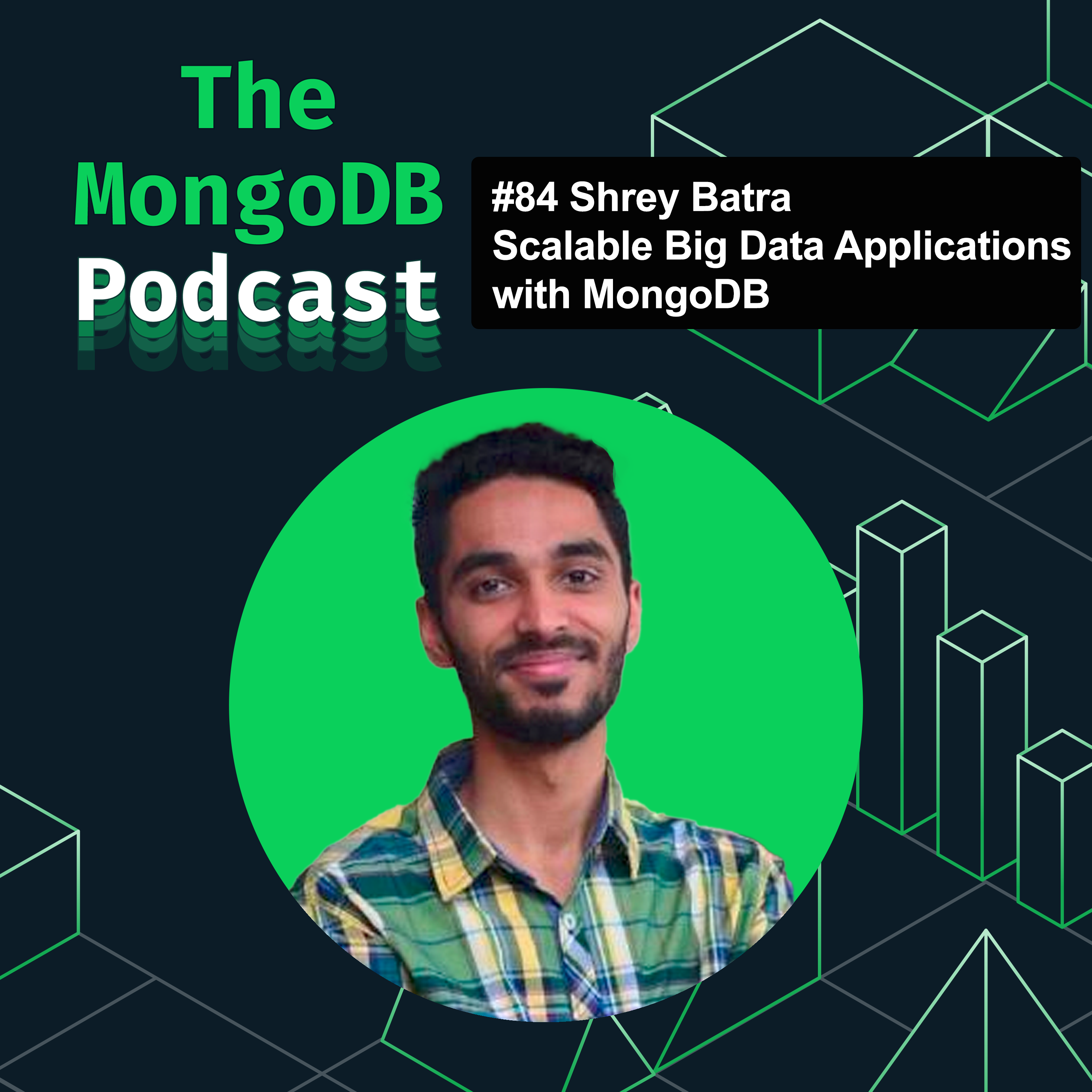 Shrey Batra is an engineer at LinkedIn. Shrey is a long-time member of the MongoDB Community and has spoken at MongoDB Conferences and led user group activities for quite some time.  Shrey joins Michael Lynn today to talk about writing scalable applications for Big Data. Shrey stresses the importance of data modeling, and shares techniques that he has leveraged to ensure that applications can not only manage large volumes of data but that can scale over time as use patterns grow and change.  Resources: Data Model Examples and Patterns: https://docs.mongodb.com/manual/applications/data-models/ MongoDB University - M320 Data Modeling: https://university.mongodb.com/courses/M320/about 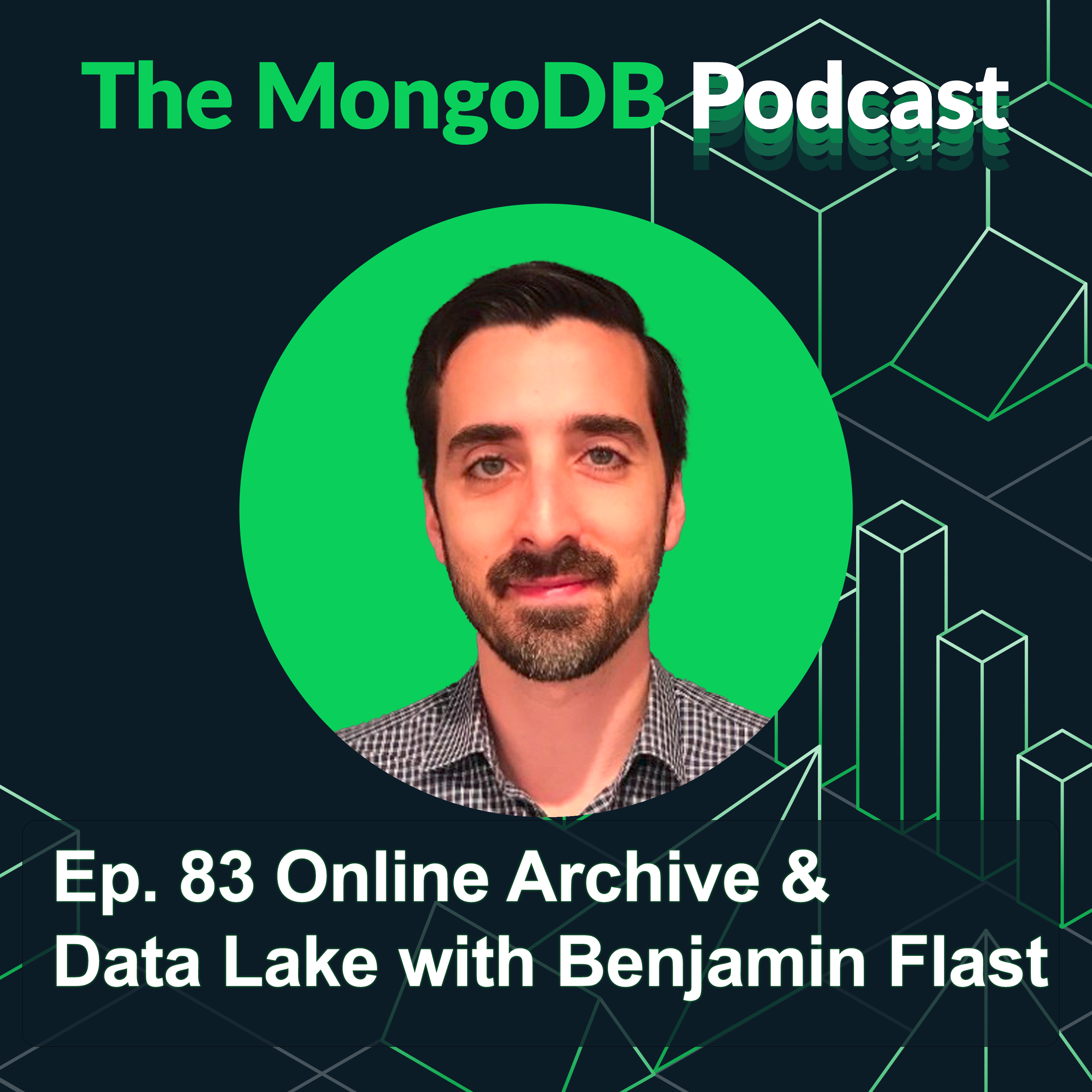 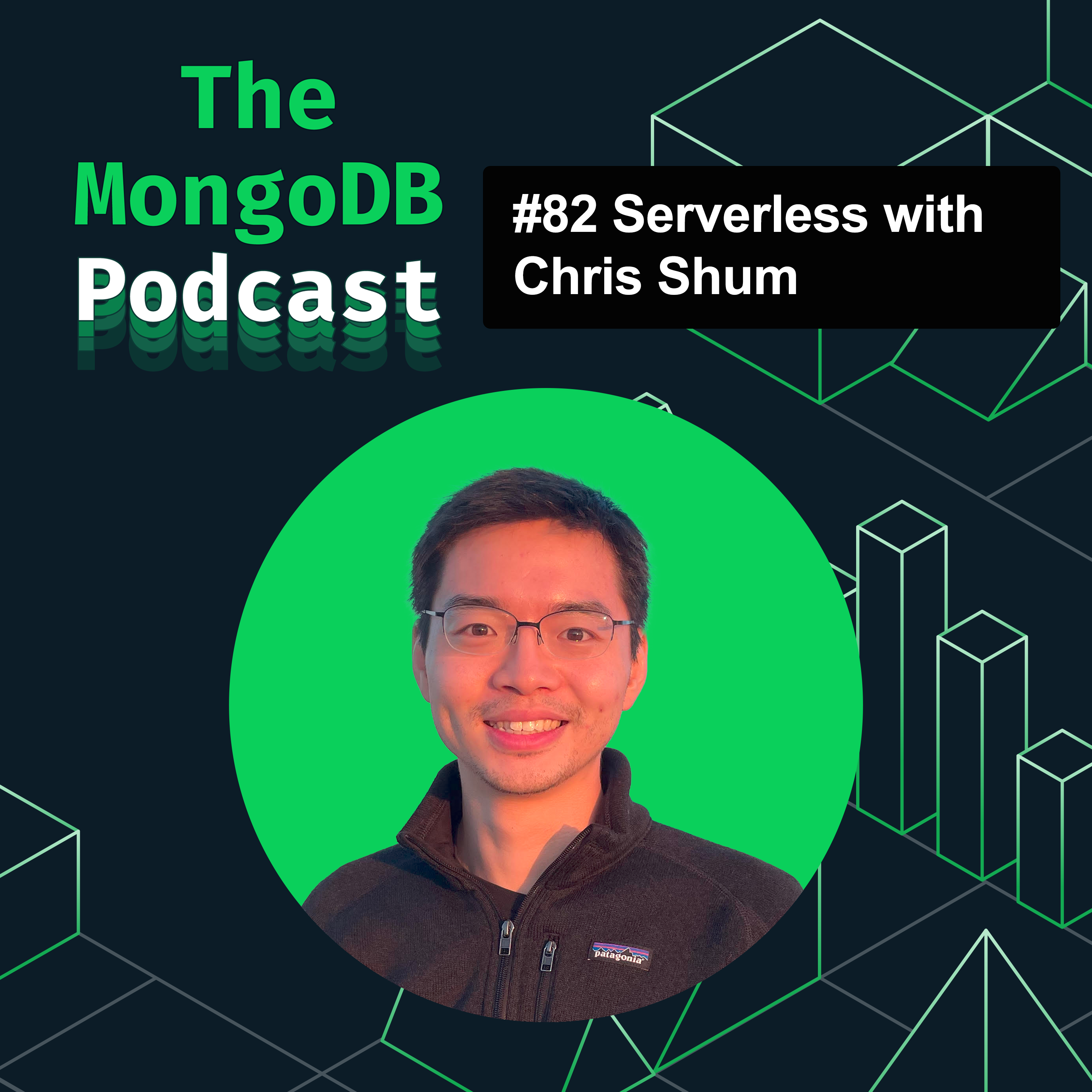 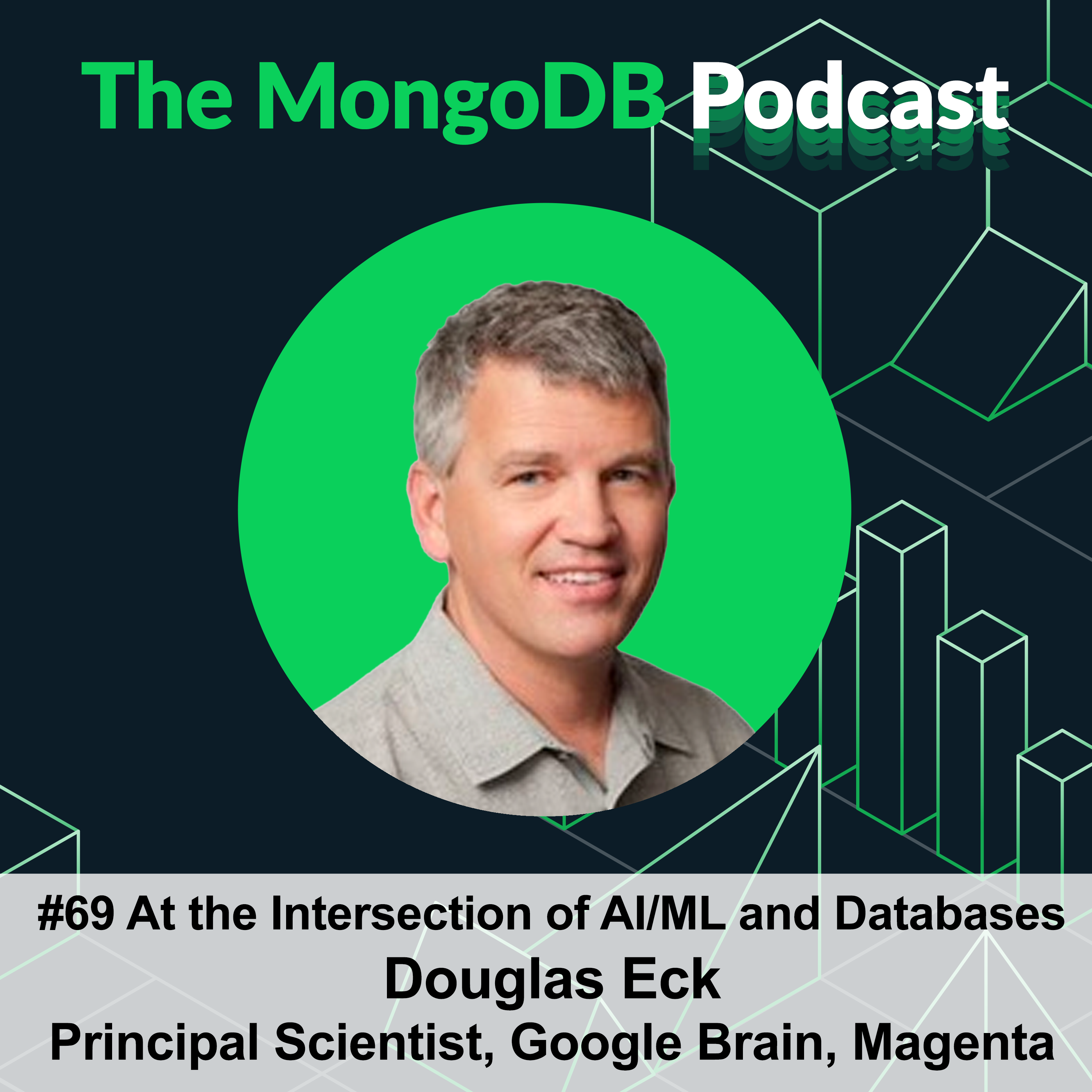 Douglas Eck is a Principal Scientist at Google Research and a research director on the Brain Team. His work lies at the intersection of machine learning and human-computer interaction (HCI). Doug created and helps lead Magenta (g.co/magenta), an ongoing research project exploring the role of machine learning in the process of creating art and music. This article is a transcript of the podcast episode where Anaiya Rasinghani leads an interview with Doug to learn more about the intersection between AI, ML, HCI, and Databases. 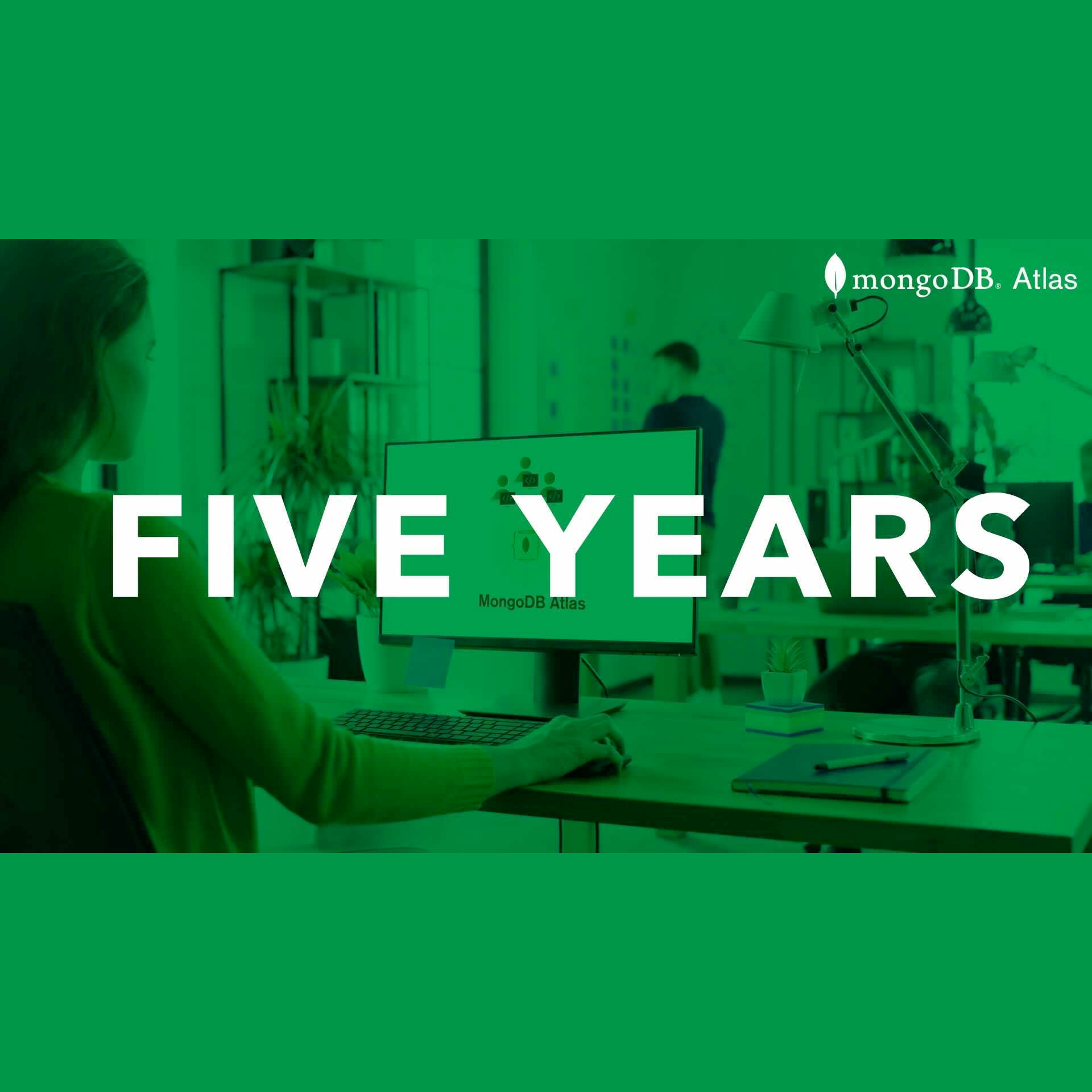 My name is Michael Lynn, and I’m a developer advocate at MongoDB. I’m excited to welcome you to this, the first in a series of episodes created to celebrate the five year anniversary of the launch of MongoDB Atlas, our Database as a Service Platform. In this series, my co-hosts, Jesse Hall, and Nic Raboy will talk with some of the people responsible for building, and launching the platform that helped to transform MongoDB as a company. beginning with Episode 1, the On ramp to Atlas talking with Sahir Azam, Chief Product Officer, and Andrew Davidson, VP of Product about the strategic shift from a software company to a software as a service business. In episode 2, Zero to Database as a Service, we’ll chat with Cailin Nelson, SVP of Engineering, and Cory Mintz, VP of Engineering - about Atlas as a product and how it was built and launched. In episode 3, we’ll Go Mobile, talking with Alexander Stigsen, Founder of the Realm Mobile Database which has become a part of the Atlas Platform. In episode 4, we’ll wrap the series up with a panel discussion and review some of our valued customer comments about the platform. Thanks so much for tuning in, please take a moment to subscribe for more episodes and if you enjoy what you hear, please don’t forget to provide a comment, and a rating to help us continue to improve.