Closing the education gap with a 40x multiplier

When buying event tickets, few things are more painful than seeing booking fees added. But what if these fees – that add up to billions of dollars a year annually – were transformed from a necessary evil to a force for good?

Adam McCurdie and Joshua Ross founded Humanitix to make that possible. Humanitix is a non-profit organization that transforms ticketing fees – disliked by event organizers and attendees alike – into education programs for disadvantaged children. The Humanitix platform makes ticketing easy for event organizers with its best-in-class technology. Then, the booking fees collected through the platform are used to fund the organization’s global education projects.

Founded in 2016 out of a garage, Humanitix has now financed approximately 140,000 days of education for children around the world. And through early 2020, Humanitix has doubled in size every 6 months as more and more event organizers choose to give their event impact.

To maintain this growth, scalability is essential. According to CTO Ryan O’Connell, “It took [Humanitix] two to three years to be able to donate $10,000 AUS to charity then six months to get to $100,000. We’ve been assessed at producing 40x investment. We see MongoDB as helping to provide that 40x multiplier.”

MongoDB Atlas, MongoDB’s fully-managed cloud platform, allows the Humanitix team to focus on developing what matters. “We have a dev team of five people including me, but we can concentrate completely on the features and fueling growth,” says O’Connell. “We get such great support from both Google and MongoDB, as well as our other partners like the Atlassian Foundation, and while of course we need to be on top of security and database management, the platform inspires great confidence.”

So much so that the charity has expanded to use other platform features like Atlas Search to power all search functionality. “We use everything MongoDB can give us,” states O’Connell.

While scaling with MongoDB is easy, maintaining rapid growth requires innovation, especially during a pandemic. So Humanitix spent 2020 preparing for live events to return in greater numbers than before by addressing the challenge of onsite check-in.

Onsite check-in for large, complex events – with multiple gates and multiple scanners – is very difficult if you have an irregular network connection. Ticket collectors need to be able to use mobile devices to scan tickets and confirm via the internet that the check-in was a success. And, as any football fan or concert fanatic knows, service inside stadiums is never reliable, oftentimes varying from gate to gate or even seat to seat.

Without a stable connection, check-in lines are long and slow as scanners try to reconnect; event organizers lose visibility into the number of attendees that have arrived; and timestamps and attendee lists are inaccurate, making accurate event analytics difficult. All of this can result in a negative experience for both attendees and event organizers.

Humanitix decided to build a mobile check-in app to address these issues. They knew the app needed to work offline, and knew it would require data synchronization, which they initially decided to build it themselves using SQLite to store data on the device, and REST APIs to handle data sync.

But the resulting app came with tradeoffs - its performance time and reliability suffered. Downloading and syncing the data took lots of time and did not always work – sometimes losing business-critical event data. The development team was backlogged, spending the majority of their time writing and updating conflict resolution and networking code, which slowed down development of new app features. The team knew they needed to try something new. After attending a MongoDB event, Humanitix realized the solution was to build an offline-first mobile application using Realm’s Mobile Database and MongoDB Atlas Device Sync. It would allow ticket collectors to scan tickets with their phones; work even without service; and then, any time the app reconnected, would automatically send an updated check-in list to MongoDB Atlas on the backend. 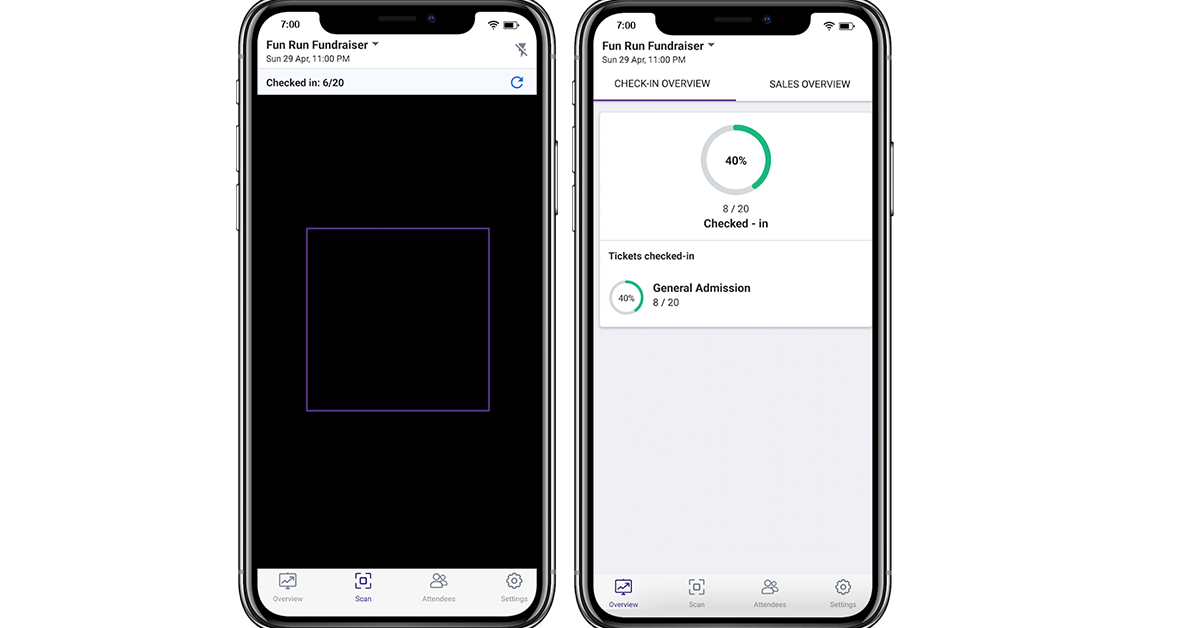 The implementation was easy too. The team went from standing up a new version of the app on the Realm to showing off a syncing proof of concept within a few hours.

“There was so much boilerplate code on our old app, and it was a nightmare to get your head around. Now that we’ve rebuilt our data sync on Realm, it’s 10 times easier to develop anything. Everything is self-contained into a single project, and you don’t have to touch a backend,” said Berta.

By using MongoDB’s mobile solution – MongoDB Atlas Device Sync and the Realm – Humanitix has been able to quickly launch a stable, performant check-in experience for event organizers. Attendees are checked in faster and business critical data is reliably saved and synched, allowing for real-time attendee visibility and post-event analytics. Event organizers are thrilled.

And, according to Berta, the Humanitix developers are excited about the simplified architecture. “I know I’ll need to be fighting devs off for tasks in the app. Everyone is going to want to work on building new features for it.”

Building with Realm’s Mobile Database and MongoDB Atlas Device Sync has also transformed the product for event organizers. O’Connell explains, “Realm is doing two things for us: Technically, it lets us quickly build an app that delivers a stable, performant check-in experience. It’s removing a lot of friction because it’s so much easier. For our business, the app we built on Realm is a best-in-class experience for event organizers and the people attending events. Our business doesn’t scale without phenomenal technology. Realm is light years ahead of trying to build sync yourself.”

"Our business doesn’t scale without phenomenal technology. Realm is light years ahead of trying to build sync yourself.”