We’re back! The Realm team is officially out and about in the community, and it feels great. Read on to see where we’ve been and what’s new in Realm.

Over the years, we’ve made iterative improvements to our Realm Java SDK to keep up with the shift to Kotlin. But it’s not the same as providing a true Kotlin-first persistence solution. That’s why we’re excited to announce the preview release of edge-to-cloud sync for our Realm Kotlin SDK – now with support for edge-to-cloud sync, KMP projects, and JVM!

As we keep working toward GA, we’d love your feedback. Try it out and make sure to join our feedback discussion.

One of our most requested features in our 2021 Developer Survey was Hermes integration. And it’s here! React Native developers – check out the alpha release and let us know what you think.

We’ve released the next iteration of object notifications for Realm Swift. With Key Path Filtering, you can specify which field of an object you want to be notified about – reducing notification noise and giving you the granular control you need over local notifications. Check out Docs →

Realm in the community 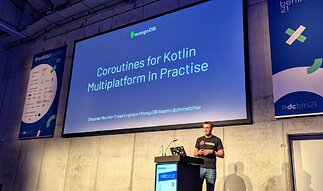 The Realm Android team spent the last two weeks at droidcon Berlin and droidcon London! We had fun presenting on topics like using the Coroutines API for Kotlin Multiplatform projects and got to meet a lot of you. One lucky attendee at each event even won a free Oculus Quest.

On November 9th, the Realm team will be participating in MondoDB’s .local series in London where Realm’s founder Alexander Stigsen will be interviewed live on the Community stage. To attend either virtually or in-person, register here.

For future events and details on where you can catch the Realm team presenting, check out the new Realm Events Calendar.

Tutorials & Articles you may have missed