So, in this lab we are required to find all documents where the pop field is more than 1,000,000 and less than 5,000 in the sample_training.zips dataset.

Following are the two queries mentioned in the detailed answer for this lab.

But both queries are not equivalent, the first query checks if the population is greater than 5,000 and less than 1,000,000. Therefore it doesn’t include documents where population is equal to 5,000 or 1,000,000. So, it excludes the endpoints.

Screenshot from the course. 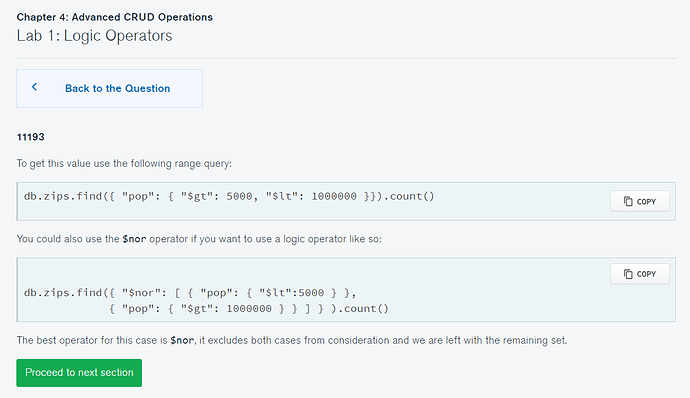 Please let me know if I’m thinking in the right direction.

However given the case and known results, since both of values - 5.000 and 1.000.000 - are not present in the field, it makes no difference to the lab mechanism since it’s all about the result number, not the syntax itself.

Also “greater than OR equal” (and less than or equal) is checking both conditions, without skipping either of operation - that means if a value is greater than X, the other comparison (equality) is still performed as well.