Well,
I tried a few different database names in the connection string.
This screenshot is just the latest.
Do you have any suggestions?
I believe I’ve tried all the solutions mentioned in FAQ 1, with the exception of downloading Mongodb. 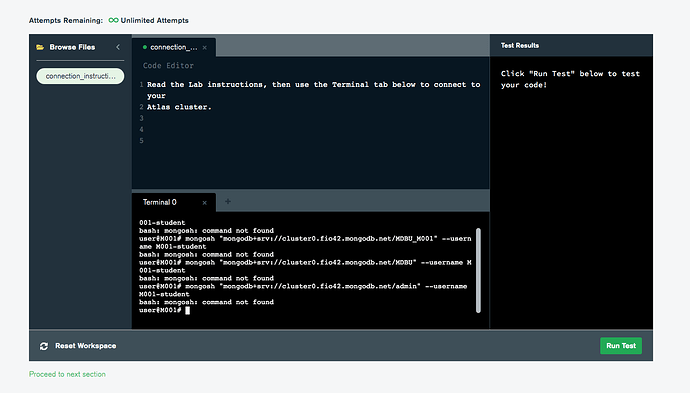 Did you try mongo instead of mongosh in your command?

I tried mongo and partially succeeded. Connection to the server succeeded but apparently, I am supposed to have created a username, m001-student, rather than the one I originally created, M001-student so I returned to Atlas and created moo1-student, gave it admin privileges( after trying read/write which failed) and deleted M001-student (having two users gave me a string with a placeholder, which I edited in the terminal to m001-student, to no avail). Why this made a difference I can only guess to be attributable to 1. some quirk of the IDE, like the change from mongosh to mongo, or 2. I mistyped the password every time but the last. Couldn’t confirm visually and my typing is truly deplorable so it’s always high on my list of suspects.

Did I fail to mention success at last?