Remi Lederman is a rising senior at the University of Pennsylvania. She’s a communications major with a minor in art history, the managing editor of UPenn’s culture magazine, and a 2018 Summer Intern for the MongoDB communications team.

As one of four marketing interns among a class of 62 comprised of mostly engineers, Remi has an interesting take on what it’s like to work on the less technical side of the business.

Andrea Dooley: The internship program at MongoDB is pretty popular among computer science undergrads. As a comms major, how did you first learn about MongoDB and the internship opportunity?
Remi Lederman: UPenn has a big engineering school and MongoDB is very well known; there’s a lot of t-shirts on campus. A lot of my friends are engineers, so I knew the company, but didn’t really know exactly what it did. I went to a career fair where I was able to meet the campus team, and found the opportunity to be really interesting. 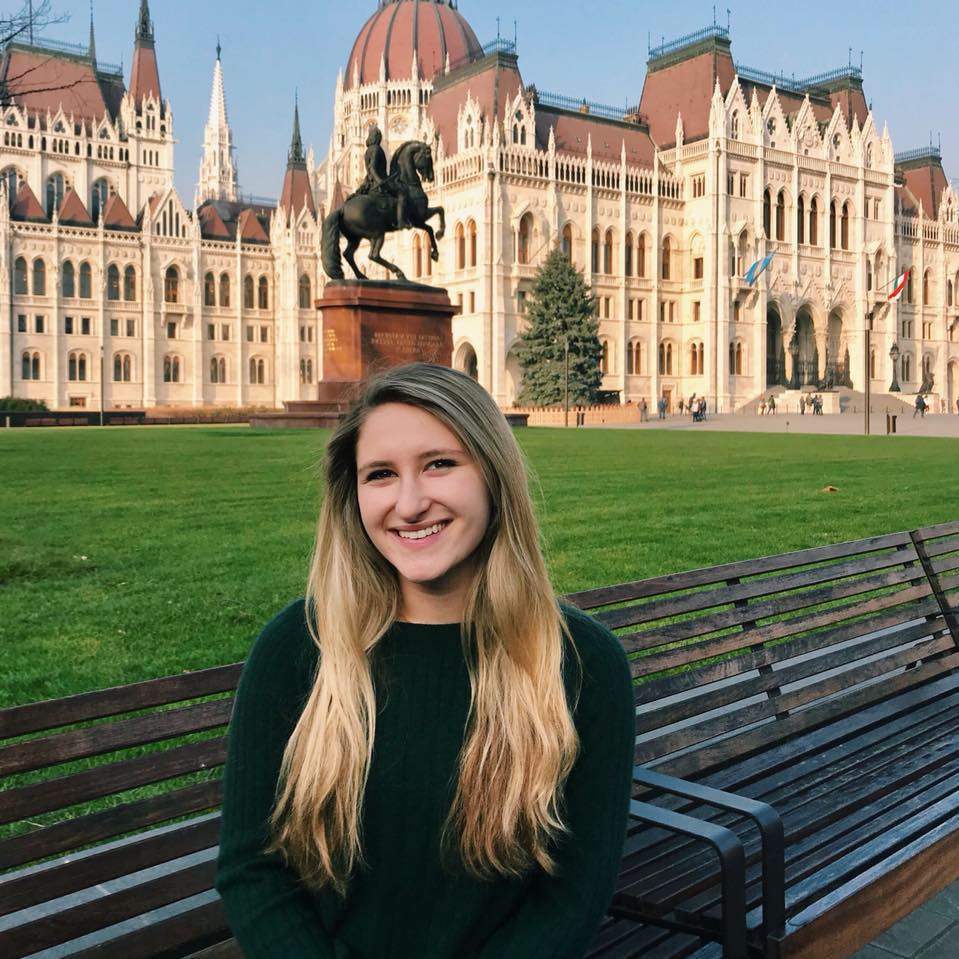 AD: Why did you want to intern at MongoDB this summer?
RL: After the career fair I kept up with the company and knew it was growing fast and that it was a really exciting time. I had an idea of the workplace culture by talking to previous interns, and had interned at a tech company the summer before, so I was looking for a similar kind of environment. I knew I wanted to do something in communications, and I felt the opportunity at MongoDB would be the perfect fit. The application process was seamless and the campus team kept me really informed. There was a lot of communication, I never felt out of the loop, and the overall process was very professional and organized.

AD: As someone not very familiar with computer science, was it difficult to learn MongoDB technology?
RL: While someone who is not very tech savvy may have a general idea of the database functionality, it’s hard to have a deep understanding of the technology. As an intern, we went through training in our first week that provided insight into what MongoDB is, how it fits into the stack, how we compare others in the industry, and our overall value proposition. For the role I’m in, it’s important to understand the different product offerings and features, what it means to be on version 4.0 versus version 3.6 for example, and what’s important to our customers and community. It’s different than what you would need to know or how you would view the database from an engineering standpoint.

AD: What’s it like to work with mostly engineers?
RL: The company is so social and everyone's so nice, it’s not hard to hang out together, even though our jobs are so different. It’s also really nice to have a big intern class. There's 62 of us, so it’s fun to attend all the events the campus team puts on for the interns and get to know each other.

AD: If you’re not working with the technology, what sorts of project do you get to work on?
RL: I get new things to work on every day. For example, had a chance to take a first stab at the press release for MongoDB University reaching 1 million registrations, which was exciting. I’ve also helped create briefing books for customers and executives, which are prep guides for when they go into an interview or are giving a talk. It helps prepare them for what to expect in terms of talking points, background information, and questions that may be asked. I love that I get to help out on many visible things the team is working on. So when I see our CEO on CNBC, or our customers at MongoDB World using the stuff I helped to prepare, it’s really rewarding.

AD: I know the engineering interns get to identify their preferred teams and projects. Did you have input in determining what you would work on this summer?
RL: I’m valued for my writing skills, so I get to write a lot and do a lot of editing. My mentor really pushed me to come up with my own projects, and creativity is really fostered here. In the beginning of the summer I was encouraged to outline goals for the internship. At some point during the summer I had the opportunity to attend a Crisis PR webinar. Like most companies, I knew that we had some form of a crisis plan in place that plan outlines what we do, the chain of command, and who is the designated team, but I wanted to put more detail into it, like creating templates for responses. My hope is that I leave at the end of my internship having given something tangible and impactful back to the company.

AD: What’s been the biggest lesson you’ve learned so far?
RL: Preparing for all possible outcomes. In school we would analyze the scenario after it occurred, but here we want to get ahead of things. I’ve learned to do that by over communicating as opposed to under communicating.

AD: What would you say to other marketing/comms interns interested in MongoDB?
RL: A lot of companies have similar roles to what I am doing here, so when choosing where to intern for the summer I looked at other factors to differentiate each opportunity. For me, working at a company like MongoDB is ideal because it’s an exciting environment. I’m invested in MongoDB because what I’m doing has a real impact, which in turn that has made an impact on me. I truly feel like a part of the company. I’m very impressed with everyone and everything at MongoDB, and I feel lucky to be a part of it.

Employees Recognized for Work Outside of MongoDB

An organization's success can often be attributed to its people, because it’s people who dedicate their time to helping a company achieve goals and be recognized as an industry leader. We find it’s even more of an achievement when our people are recognized for the work they do outside of MongoDB. Two passionate members of the MongoDB Engineering organization were acknowledged by separate notable organizations for their independent work. Dr. Michael Cahill is the Vice President of Engineering (Storage). Based out of our Sydney office, Michael leads the global Storage team which is responsible for concurrency control and crash recovery. Optimizations in the storage layer can have a huge impact on making customer workloads more efficient. Michael was recently recognized as a winner of the Test of Time Award at the annual SIGMOD conference for his work on a new algorithm for implementing serializable isolation. SIGMOD is the Association for Computing Machinery's Special Interest Group on Management of Data, which specializes in large-scale data management problems and databases. The conference is considered one of the most important database conferences in the world. Researchers and engineers working on database technology come together to present their work, and new innovations are often published first at SIGMOD. “Serializable Isolation is the gold standard for databases: it means that applications using the database can reason as if transactions run one at a time. There is never any interference between concurrent transactions and each transaction takes the database from one consistent state to another. My contribution was to use database internals, including hooks in code for multi-version reads and an extension of intent locks, to detect potential anomalies at runtime and make executions safe regardless of the application logic. “I’m both proud and humbled to receive the Test of Time Award this year. While I’m proud of the work we did and the impact it has had, I am humbled to see my name listed beside some of the greats of the field who blazed the trail before me.” The main implication of Michael’s work is that there is now a way to build databases that provide serializable isolation with only a modest change to existing systems. A. Jesse Jiryu Davis is a staff engineer at MongoDB on the Drivers Team. He leads development on the C and C++ drivers and is the author and maintainer of Motor, an async Python driver. He also pitches in on PyMongo development and oversees the design and specifications process for a lot of new MongoDB driver features. He spends time mentoring new coders and speaking at conferences. Jesse is a member of the Python Software Foundation, which manages the Python language and the community of Python programmers, and sponsors dozens of Python conferences. “When I joined about 7 years ago their main mission was to promote the use of Python, and they won: Python is perhaps the most popular language. Now I see the PSF devoting much more effort to expanding computer science access to poor countries and marginalized groups, using Python as a vehicle. For example, the most recent PSF grants were to girls' education events in Brazil and Cameroon.” Jesse was recognized by the Python Software Foundation for his community service work, including his work on their blog, and his involvement with the NYC conference PyGotham. “I was awarded for two responsibilities I've really enjoyed. My work on the PSF blog gives me an excuse to interview some of the smartest and most accomplished people I know. The second part of the award, for my work on the PyGotham conference, was mainly in recognition of my speaker-coaching program: I thought it would be helpful for first-time speakers to have professional coaching, so I raised enough money to hire my own speaking coach to spend an hour with each of them. This year we're repeating that program for PyGotham speakers and expanding it to the PyOhio conference, too. Speaking at conferences transformed my career, and I want to make sure that everyone has the same opportunity I did to learn public speaking, particularly members of groups underrepresented in tech.” We could not be more proud of both Michael and Jesse for their recognitions. It is a true testament to the level of talent at MongoDB, and the passion of the people behind the product. To learn more about MongoDB people and culture, click here .