As part of our mission to help developers build better apps faster by providing a database platform that doesn’t hold them back, we are always looking for new ways to better understand the challenges devs face.

We recently undertook some research with Stack Overflow, the largest, most trusted online community for developers, and the findings confirmed a lot of what we already knew and believed, such as developers’ critical role in driving innovation and growth in every type of organization. They also unveiled some troubling disconnects that still exist between business leaders and their developers.

The research, which surveyed more than 1,000 developers worldwide, revealed that despite developers being seen as key drivers of enterprise innovation – with 68% of respondents viewing developers as the primary drivers – companies are failing to capitalize on their skills and abilities. Many (33%) believe their companies aren't gaining a competitive advantage because they don’t understand the technical realities and opportunities that developers face.

Findings revealed three main challenges developers are dealing with that hold them back from fully delivering as innovators: 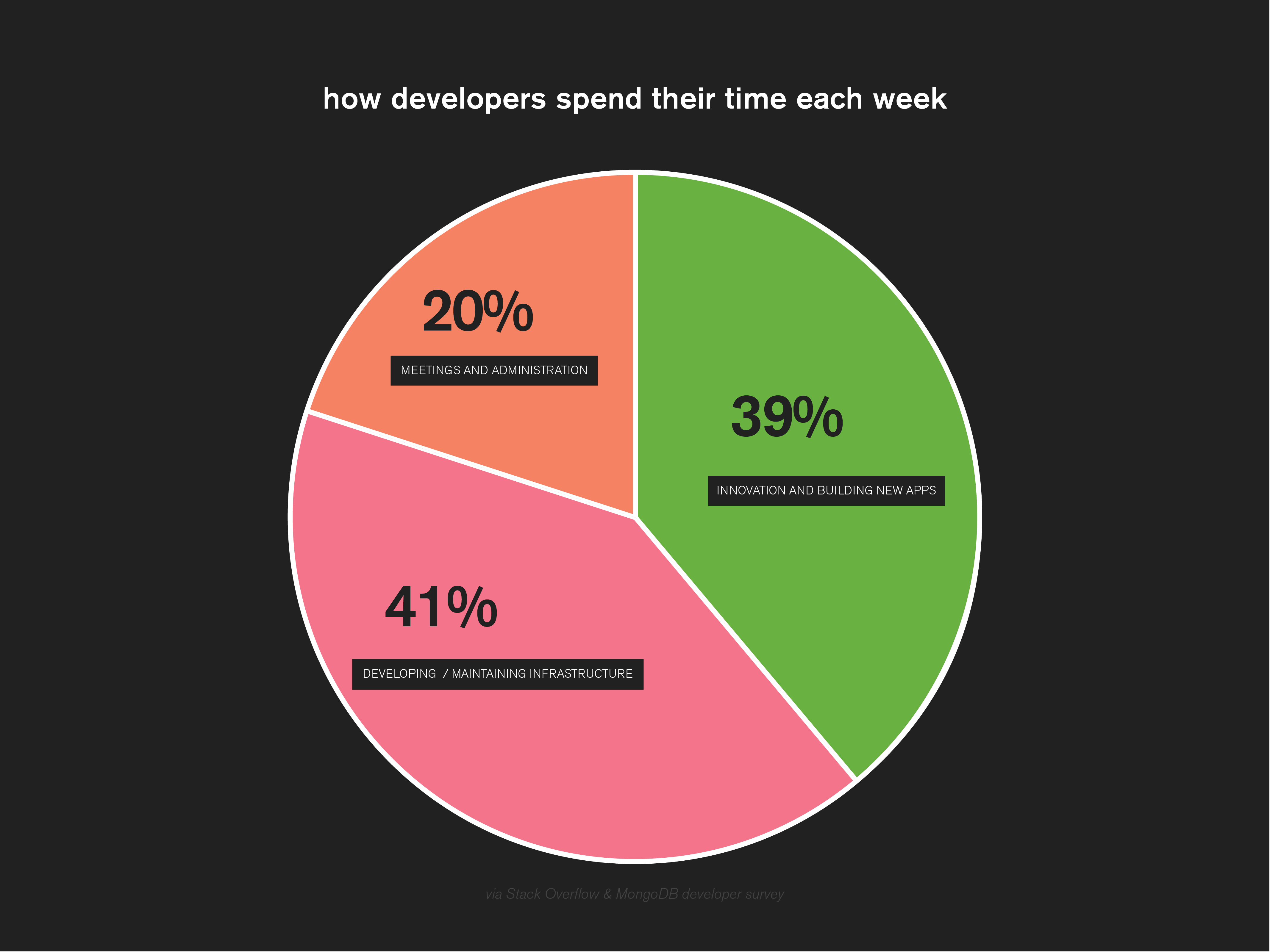 It was with these challenges in mind that we launched MongoDB Stitch. As developers ourselves, we recognize that web, mobile, and IoT apps today almost always include a combination of services like authentication systems, payment apps, messaging platforms, or internal microservices.

Stitch lets developers focus on building applications rather than on managing data manipulation code, service integration, or backend infrastructure. Whether you’re just starting up and want a fully managed backend as a service, or you’re part of an enterprise and want to expose existing MongoDB data to new applications, Stitch lets you focus on building the app users want, not on writing boilerplate backend logic. 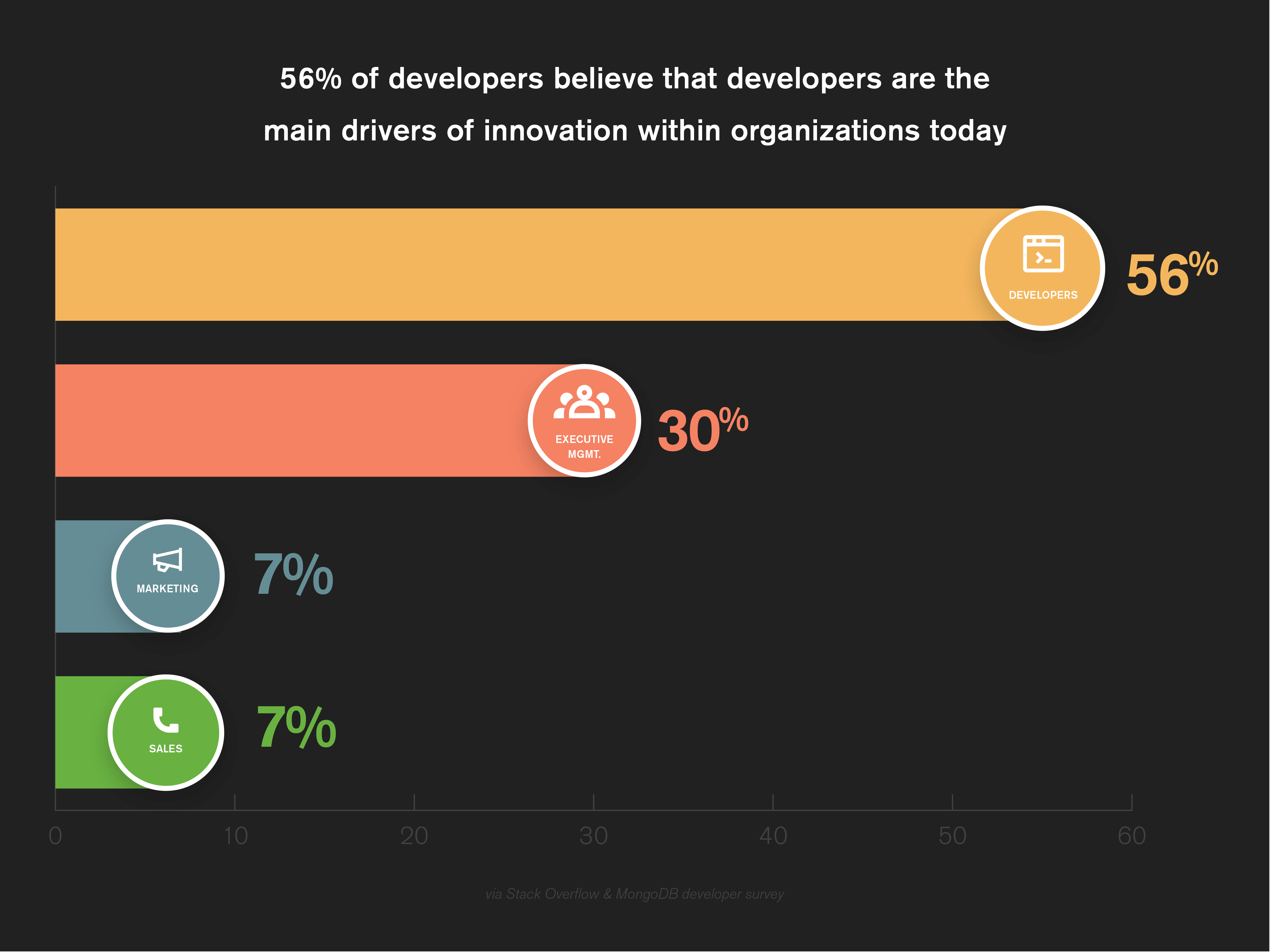 The cloud: challenge or opportunity?

The survey also asked developers about their experiences with the cloud, resulting in some interesting insights:

MongoDB Atlas is MongoDB’s answer to these cloud concerns. Fully-managed with best-in-class security, Atlas is the easiest and most cost-effective way to get started building great applications on MongoDB. We take care of the operations and security best practices and let developers focus on driving innovation.

Give the devs what they want

The rise of the developer within organizations has been an ongoing trend for years, and business leaders are increasingly recognizing the value that developers provide in keeping their companies competitive.

But to truly maximize the innovation that developers can provide, software developers will need the right technology in place – technology that is intuitive and natural to work with instead of creating additional speed bumps in the development process. For developers to truly take their rightful place as Kingmakers of the enterprise, business leaders will need to continue to grow their understanding of how to best arm their developer teams to drive a competitive edge in a software-centric world.

Andrew is part of the MongoDB product team, responsible for building the vision, positioning, and content for MongoDB’s products and services, including the analysis of market trends and customer requirements. Before joining MongoDB, Andrew was director of product management for MySQL at Oracle – with a particular focus on distributed, highly available databases. Prior to Oracle, Andrew worked in software development for telecoms with a focus on HA, in-memory, real-time databases.