As we came to the last week of Eliot's MongoDB World Weekly Challenge, we wanted to challenge your creativity by asking you to create a digital Rube Goldberg machine that used Stitch and as many APIs and services as possible. We had some great entries and the one that tickled us the most also had some of the most intricate code we saw in the entries, it stood out as a winner.

The creator of the winning entry, Jonathan Dharmaraj, told us how the idea behind the challenge was new to him. "I had never heard of the term “Rube Goldberg Machine” before the challenge. It was a lot of fun watching different videos on different machines and how extravagant they can get!!".

From the outside, Jonathan's creation seems simple. Select your astrological sign in Facebook and after a pause the ideal, universe selected GIF is returned to you. As the diagram shows, it's far from simple inside. 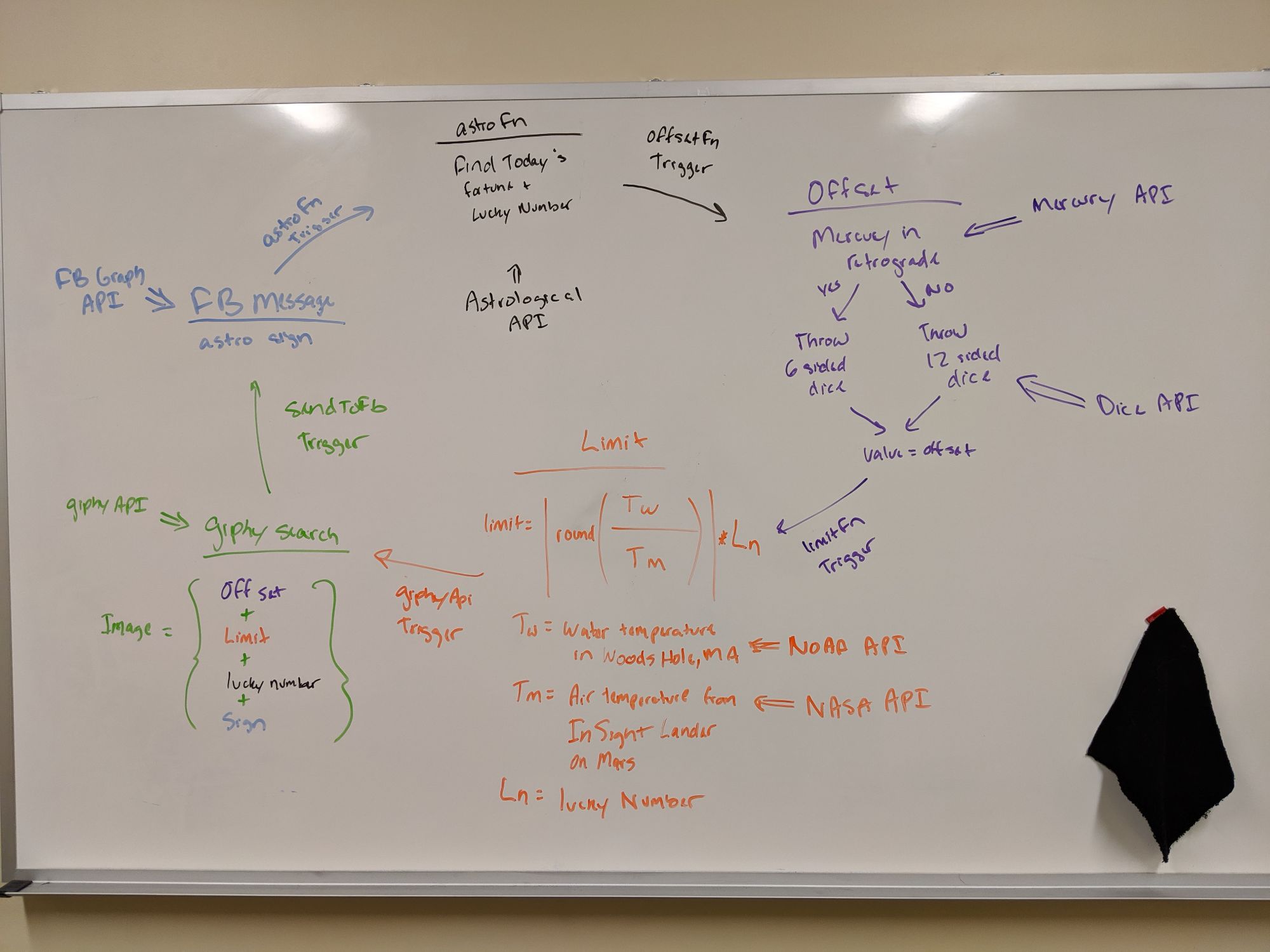 The process starts with Facebook Messenger and the user selecting an astronomical sign. When that's done, a Stitch webhook is called and the incoming message is processed. If it's an astrological sign, then the message is inserted into a MongoDB Atlas collection and typing dots are displayed to the user.

Now here's the part we like. When that message is written into the database, it's accompanied by a field called nextTrigger which names the next trigger to fire. For the first step, that's astroFn. And there's an astroFn trigger looking out for that nextTrigger setting. When it sees a document being inserted or updated it runs the astroFn function.

It's this simple mechanism what sees actions ripple through multiple triggers and functions. Each step sees information added to the message document in the database and then passed onto the next step.

The astroFn function calls the astrological API, gets a lucky number and adds that to the document sending it on to the offsetFn trigger and function. There, two API's are used, one to see if Mercury is in retrograde and select a dice, another to throw the selected dice. The offset and the next function (limitFn) are written to the document and it moves on through the triggers.

In limitFN, the lucky number and values from two APIs - the water temperature in Woods Hall via NOAA and the air temperature from the Insight Lander on Mars - and does a little calculation. That result becomes a limit value and we're nearly there. The offset, limit, lucky number and sign are now passed on to a GiphyAPI function. Here all the assembled data is put into a call to the Giphy API to select a GIF, the URL of which is added to the document, written and all pushed on to the sendToFB trigger and function.

There, in sendToFB, the message with the GIF and lucky number are returned to the user. And so the circle is complete and in a delightfully contrived way, just as we had hoped to see. You can find the code at https://github.com/jjdharmaraj/gif-text-buddy learn from it or you want to create your own version.

We're pleased to see Jonathan take the ultimate prize of Eliot's MongoDB World Weekly Challenge. As Jonathan told us, "It was fun!".

We're live at MongoDB World for Day 1 as the blog team cover all the events taking place over the day, meeting and chatting with everyone and bringing you a flavor of the conference. Join us as our auto-updating live blog keeps you in touch.

Heritage and culture sits at the centerfold of human interaction. With a population of more than 650 million people, speaking over 400 different languages, and spanning a geographic area from the tip of Patagonia to the Caribbean, the people of Latin America and the culture of their 33 countries are difficult to condense into one identity. In celebration of Latine Heritage Month, we asked a few Latine MongoDB employees to reflect on their heritage and ultimately how that shapes their work. Tayrin S Riojas , Head of Government Relations and Public Policy I was born in Los Angeles and moved to Mexico City before my third birthday. In my junior year of high school, my family moved back to the United States and ended up in Dallas. I feel so incredibly fortunate to have experienced living in both countries for extended periods of time. I remember high school in the United States feeling like I was in a Hollywood movie — there were big lockers, cheerleaders, and sports teams. However, I felt my friends in Mexico City had a wider variety of social activities compared to the friends I made in the United States. As Mexicans, and in many Latino cultures, we are passionate and socially driven with our families, extended families, and friendships. This is what I personally love most about my culture. We have great traditions and share in them together, from posadas, piñatas, soccer games, and even mourning. This is something that transcends our location, and I feel honored to have been raised with these values. Throughout my career, I have worked in telecommunications, film post-production, healthcare, and the government and held roles such as lobbyist, Senate Committee Consultant, and International Relations Advisor. Tech is at the core of every single one of these opportunities. I am certainly not an engineer, nor can I code anything functional, but I do have a passion for learning about technology. After having my second “COVID baby” and being on parental leave, I decided I wanted to get back into tech. A relative recommended MongoDB, and soon after, I started as a Cloud Account Executive for the Latin America market. I loved talking to our customers, and it taught me so much about the power and versatility of our tech. It was a great role, but I had spent so much time working with the government that I honestly missed it. I truly believe that to excel at what you do, you must have your heart in it. MongoDB is growing fast, and we are encouraged to build our own careers here. When I realized we had no Government Affairs department, I decided to propose it. I wrote a paper on why Government Affairs, why now, and the incredible value and ROI this could have for us (especially with our partnerships). I sent my proposal to leadership for their consideration. From ideation to leadership approving the department and role, I had amazing mentors, guidance, and support from other women at MongoDB and employee resource groups like Sell Like a Girl and The Underrepresented People of Color. I am now the Head of Government Relations and Public Policy at MongoDB. As a Latina woman, having a company of MongoDB’s size make room for your ideas and contributions has been an incredibly fulfilling journey. There is still much work to be done to build our Government Affairs department, but I am incredibly blessed to work for people I admire and contribute to the company through a role I am passionate about. If you are looking for a great career in tech, I urge you to consider MongoDB. Adriano Fratelli , Customer Success Manager My family’s history in Brazil began with my grandparents who migrated from Calabria, Italy to São Paulo in the mid-1960s. My grandfather had received a job opportunity in the largest and most modern port in Latin America, Santos. Growing up in São Paulo, my childhood was rich with Brazilian culture. I was surrounded by family, music, dancing, great food, festivals (like Brazilian Carnival ), and sports. My journey into technology began with my father. He worked for 40 years as a technology product manager in the retail industry and inspired me to pursue a career in tech. I finished my degree in Information Systems in 2014 and started my professional career at IBM as a Field Technical Sales Specialist. I then worked at Lenovo and Oracle before looking for a new career opportunity. My decision to start a new journey at MongoDB was due to the great perspective that customers have regarding our products and services, along with MongoDB’s inclusive culture. The world of technology has opened up many opportunities in my personal life by helping me improve my English language skills and giving me exposure to different countries and cultures around the world. MongoDB is growing exponentially in the Latin American region and, as part of the Customer Success team, I enjoy that I’m able to help our customers onboard and adopt MongoDB’s services. One thing that makes working at MongoDB stand out is knowing that employee’s differences are embraced and our ideas are heard. As part of a global team, it’s great to know that I have the space and support to share my ideas and am valued for the unique perspective I bring. Read more stories from Hispanic and Latine employees at MongoDB . We’re embracing differences every day at MongoDB. Join us to make an impact and transform your career.