Appboy is pioneering a new vertical in the marketing automation industry with a powerful technology designed for companies looking to build better relationships with customers through mobile and other emerging channels. Appboy powers some of the most successful brands in the new mobile economy such as iHeartMedia, PicsArt, Etsy, Samsung and Urban Outfitters.

To power its marketing automation platform, Appboy uses MongoDB as the main data storage layer for its analytics and targeting engine. Appboy is currently processing billions of data points per day on behalf of thousands of customers. In this blog post, you will learn some of the ways in which Appboy has evolved to use MongoDB, remaining agile as the company has grown to massive scale. This post will cover topics such as random sampling of documents, multivariate testing and multi-arm bandit optimization of such tests, field tokenization, and how Appboy stores multi-dimensional data on an individual user basis to be able to quickly optimize for the best time to deliver messages to end users.

Appboy works with customer bases of all kinds of different sizes. Some of our customers are just starting and have tens of thousands of users, many have single digit to low tens of millions of users, but multiple Appboy customers have hundreds of millions of users that they collect data on and keep engaged thanks to Appboy’s marketing automation technology.

At the core of the Appboy platform is customer segmentation. Segmentation allows you to target users based upon their behavioral data, purchase history, technical characteristics, social profiles and demographics. Creative and intelligent use of Segmentation and Messaging Automation enables our clients to seamlessly and easily move users from install to active customers who help you meet your key performance indicators (KPIs). Segments can be very specific such as “users with iOS 8.1 who have purchased shoes and have not favorited an item in the last week” to a broad audience such as “Spanish speaking users who have not yet beaten level 2.” 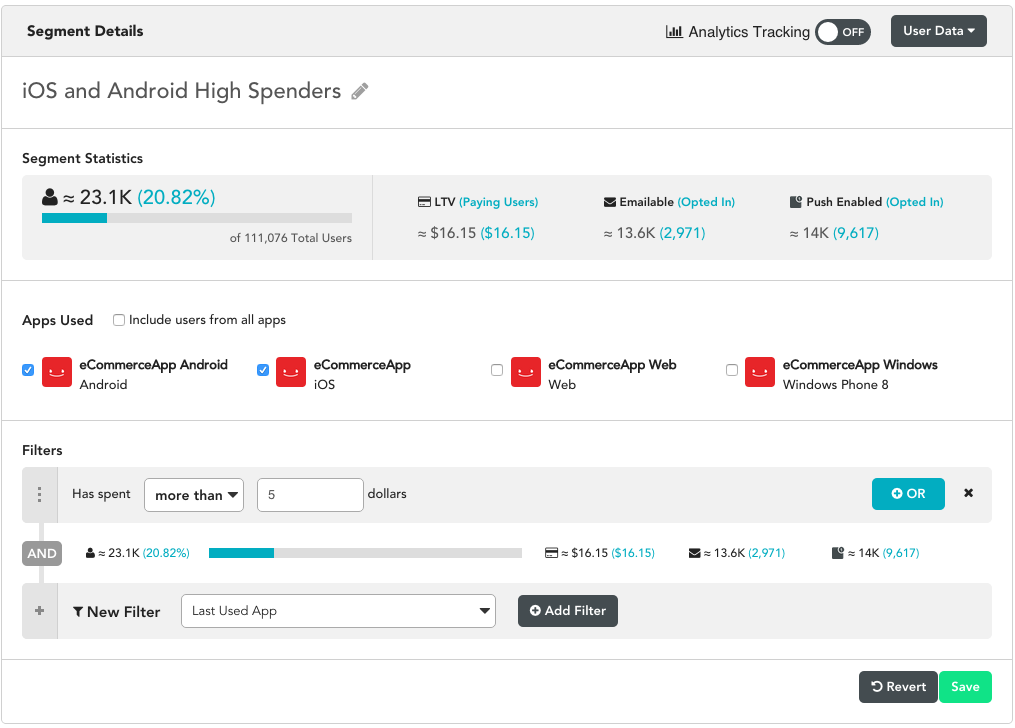 When clients use the Appboy dashboard to define a segment, Appboy performs a real-time calculation of the population size, and other characteristics such as how many users in the segment have push notifications enabled or how much money the average user has spent in the app. These calculations need to be real-time and interactive, which is challenging to do with massive user bases without a Google-sized amount of infrastructure. The challenge here is to figure out how to handle scale effectively, and do what works for any size user base. Random statistical sampling is a good way to do this.

Random, statistical sampling is around us in everyday life. Public opinion polls on what percentage of Americans approve of the President aren’t conducted by asking every single American his or her opinion. National TV ratings aren’t determined by a ratings agency being tapped into every person’s TV set. Instead, those figures are estimated based on statistical sampling, which makes it possible to estimate the characteristics of a larger group by randomly observing members of that group, called a sample size. Through statistics, one doesn’t even need a massive sample size in order to make accurate estimations for a massive population. Many political polls only use a few thousand adults to estimate political leanings of hundreds of millions of citizens. But with each estimation comes what is called the confidence interval, also called the margin of error. That’s the plus-or-minus number that’s often reported alongside statistics from polling agencies.

We can apply those same principles to our user base. Sampling users has a distinct advantage over traditional analytics databases because we can sample the entirety of actions taken by people instead of sampling from a raw event flow. One thing to note is that Appboy only uses statistical sampling to give immediate, real-time interactive feedback about a segment on the web dashboard. When running a marketing campaign or exporting a segment as a Facebook Custom Audience, exact membership is calculated and these principles do not apply.

To start, we can add a random number in a known range to each document and call this number a “bucket.” Let’s pick something small enough that, for any reasonably sized user base, we can expect to find users in each bucket, but large enough such that we can pick a decent distribution of users through ranges. For example, choosing a random number between 1 and 10 doesn’t allow us to easily grab a small percentage of a user base with hundreds of millions of users, and similarly, picking a number between 1 and 1,000,000 doesn’t give a good, uniform distribution for apps with smaller audiences. At Appboy, we have 10,000 buckets, ranging from 0 to 9,999.

Let’s say that you had 10 million documents which represented people. Let’s add a random number to that document and index it:

MongoDB 2.6.11-rc0 is out and is ready for testing. This is a release candidate containing only fixes since 2.6.10. The next stable release 2.6.11 will be a recommended upgrade for all 2.6 users. Fixed in this release: SERVER-13875 ensureIndex of 2dsphere index breaks after upgrading to 2.6 (with the new createIndex command) SERVER-14070 Compound index not providing sort if equality predicate given on sort field SERVER-16348 Assertion failure n >= 0 && n < static_cast (_files.size()) src/mongo/db/storage/extent_manager.cpp 109 SERVER-17815 Plan ranking tie breaker is computed incorrectly SERVER-18620 Reduce frequency of &ldquo;staticYield can&rsquo;t unlock&rdquo; log message SERVER-19191 &ldquo;restore&rdquo; role does not have applyOps permissions on servers using a keyFile 2.6 Release Notes | Downloads | All Issues As always, please let us know of any issues. &ndash; The MongoDB Team