Welcome to that time of the year when we look back at what we've delivered to our users and community in the past year. Here's MongoDB's 2018, month by month - it's been a great year so let's start with...

The year started with the announcement of a new Go driver in development. Go is a popular language, used widely including inside MongoDB Inc, and we decided to start developing an official driver.

Meanwhile, the GUIs for MongoDB - Compass and Compass Community - were updated with new features including plugins, auto-complete, and a special read-only Compass. If you've not tried Compass yet, you've already spent this year missing out.

The big news for the second month of the year was the confirmation that MongoDB 4.0 would have multi-document transactions. The feature, the result of years of work within MongoDB, was already in beta and heading for launch later in the year.

It's nice to know you are wanted and in March, Stack Overflow's survey told us that MongoDB was the most wanted database amongst its users. It's nice to know but we always want to get better...

A landmark for us as we celebrated MongoDB becoming one thousand strong around the world and we're growing faster every day! Meanwhile, Compass carried on improving with the addition of an Aggregation Pipeline Builder which helps you harness one of MongoDB's most powerful query options.

It's June and it's time for MongoDB World 2018. As well as a great conference there was plenty to enjoy at home including the release of MongoDB 4.0 which as our CTO says is "the best database for modern applications".

We also brought free cloud monitoring for MongoDB into the new release, brought the MongoDB Atlas free tier to Google Cloud Platform and rolled out our BI connector as a managed option on MongoDB Atlas.

And that wasn't all. MongoDB Stitch, the platform for your MongoDB Atlas applications, was officially made GA. Add to that MongoDB Atlas Enterprise that lets companies deploy to Atlas with an encryption-at-rest storage engine and bring-your-own-key management and get the most secure cloud database service anywhere.

The release of the MongoDB Enterprise Kubernetes Operator as a beta offering was the icing on the MongoDB World cake, giving ops the ability to deploy MongoDB and OpsManager or Cloud Manager into Kubernetes clusters; yet another place you can run MongoDB!

For companies who need their global data running fast and local MongoDB Atlas Global Clusters were launched at the start of July. Using MongoDB zone sharding, you are able to direct database traffic to the nearest global shard.

Connections are what its all about in IT and in July we made the MongoDB BI Connector talk ODBC natively letting Excel, Tableau and PowerBI tap directly and easily into the wisdom of MongoDB data.

With MongoDB 4.0's multi-document transactions out in the wild and the most popular drivers offering support for those transactions, it was time to start showing people how to put them to work. In August, for example, the latest MongoDB Java driver got an article on its transactions support and how to apply it to your Java applications.

Over on the MongoDB cloud, we announced that all users could use the MongoDB Atlas Data Explorer. That meant even free users could make use of the "at-your-fingertips" queries, filters, document copying and editing from their web browser.

The MongoDB Connector for Apache Spark was certified by Cloudera and Azure Databricks this month so more users could put Spark to work doing data science with MongoDB.

This month also saw the introduction of the new MongoDB SSPL - Server Side Public Licence. This new license is designed to ensure MongoDB is being developed for you today and tomorrow. If you use MongoDB in your application, don't worry, MongoDB is free (as in speech) as it has ever been.

Back in July, we saw the millionth registration to MongoDB University. This month we profiled that millionth student, Guillermo Ulises Lo Coco from Tenerife in the Canary Islands of Spain who signed up for the free courses on MongoDB Basics and New Features and Tools in MongoDB 4.0.

Talking about free, the Atlas free tier completed the triple by arriving on MongoDB Atlas for Microsoft's Azure cloud. Now you can try out MongoDB on AWS, Google Cloud Platform or Azure for not a cent (or penny).

MongoDB Charts, which lets you turn your data into splendid visualizations arrived as a beta on MongoDB Atlas. That means it's easier than ever to turn data into a data source and then into a dazzling dashboard. December also saw the beta launch of MongoDB Stitch Hosting which adds serving static web content to the list of things Stitch can do for you.

And as the year draws to a close, we return to where we started. The Official MongoDB Go Driver is now feature-complete and available for beta testing. So, if you are a Go developer looking for something to do over the Christmas break... 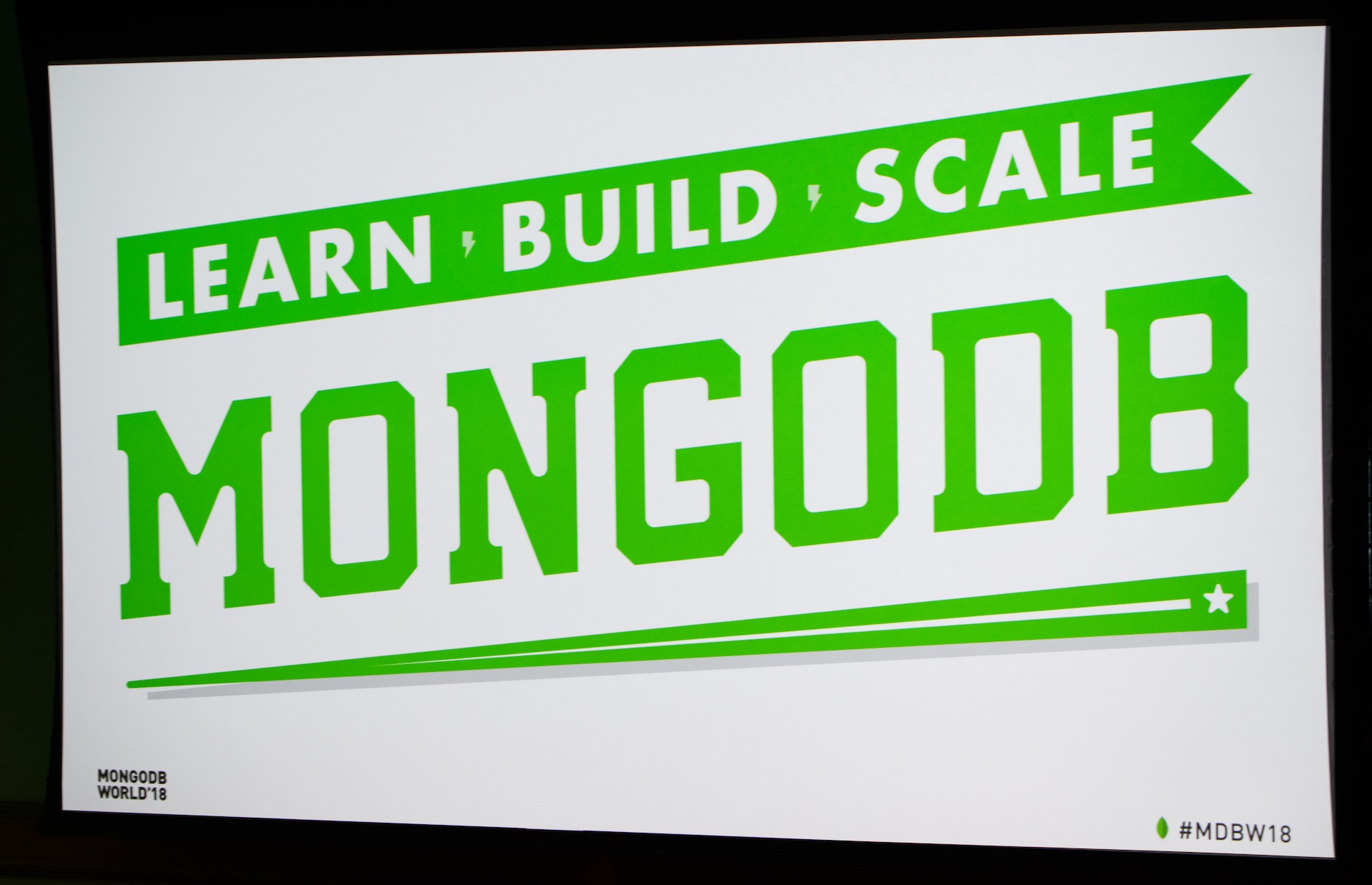 The most important thing is that we couldn't have done any of this without you, our customers and community, and your valuable feedback into what you need from modern databases and applications. Thank you for your participation! Now, onwards into 2019!

Please note: This article previously discussed MongoDB Mobile/Sync. Those products are currently being deprecated as we work towards a public beta of MongoDB Realm. To learn more about this, see the MongoDB Realm site.

Playback is where the MongoDB blog brings you selected talks from around the world and around the industry. Here, we are showcasing the great talks at MongoDB World 2018 from people running MongoDB in production and at scale. Behind the scenes of its holiday rental business, HomeAway analyses its interaction with users like you, linking together the many interactions you might have when booking that rental over many weeks. Pulling those many sessions, usually over multiple devices, is a real challenge. HomeAway chose MongoDB as the engine to persist the linked data. In their MongoDB World 2018 talk , HomeAway Data Architect Singaram Rangunathan and Principal Software Engineer Naveen Malhotra, talk about why they chose MongoDB. HomeAway's solution is based around a KeyRing which gathers identifiable user sessions together. When common keys are spotted between KeyRings, they are chained together so that a complete picture of a user's overall experience is constructed. The process sees all the incoming session documents being processed through a Kafka pipeline which persists the links between KeyRings and KeyChains in MongoDB. Rangunathan discusses how HomeAway worked out how to get the scale they needed in the cloud to process the data. He also talks about using MongoDB sharding for horizontal scaling, pre-splitting the sharding keys for best performance and how they selected the appropriate cloud hardware to run their solution on. Learn more about data-streaming with Kafka and MongoDB. See more talks like this - in person - at MongoDB World 2019. Register Now!

Since the release of the Charts Embedding SDK in May of 2020, developers have been exploring powerful new ways to visualize and share data from their MongoDB Atlas clusters. Embedding charts and dashboards is a valuable use case for Charts users and the new Embedding Page streamlines the embedding experience for first time users and veterans alike. Everything you need on one screen Don’t worry if the concept of embedding within the MongoDB Charts platform is new to you. The Getting Started tab provides configuration guidance, and links to video references, code snippets, live sandboxes, and other resources to help you get started. But just as your applications may evolve according to your needs, your embedding requirements may also change over time. Once you have set up an embedded dashboard or chart, the Items tab acts as the landing page. Think of this as a live snapshot of your current embedding environment. You’ll see a list of all of your charts grouped by their dashboards, be able to search based on title or description, and filter the list to show only dashboards. Within each row, you can view a chart or dashboard’s embedded status, see which type of embedding is enabled, view and copy the embedding ID, and access the full suite of embedding settings available for each item. This means that you can add filters or change your embedding method without having to know exactly where every chart or related setting lives. This approach also lets you operate with confidence on one single page. How cool is that? Authentication settings The Charts SDK allows you to configure unauthenticated embedding for dashboards or charts, making for a painless way to share these items in a safe and controlled environment. Depending on your use case, this setup may be a little more flexible than you’d like. The Authentication Settings tab contains authentication provider settings, giving project owners a single source of truth for adding and maintaining providers. Our focus for this feature is on simplicity and consolidation. We believe wholeheartedly that if we can enable you to spend less time hunting down where to configure settings or find resources, you can focus more on what really matters and build great software. For more information on authentication options, read our documentation . New to MongoDB Atlas Charts? Get started today by logging in to or signing up for MongoDB Atlas , deploying or selecting a cluster, and activating Charts for free.