Now is the time to learn MongoDB which is quickly emerging as "winner of the next generation NoSQL database wars," according to David Kellogg, former CEO of MarkLogic, who says that due to "increasing returns in platform markets," the MongoDB community is growing exponentially. And

"the more people that use a database, the richer the community of people…the more jobs there are around it, which attracts more people to learn how to use it…[and] the more likely major universities are to teach how to use it in their computer science departments" 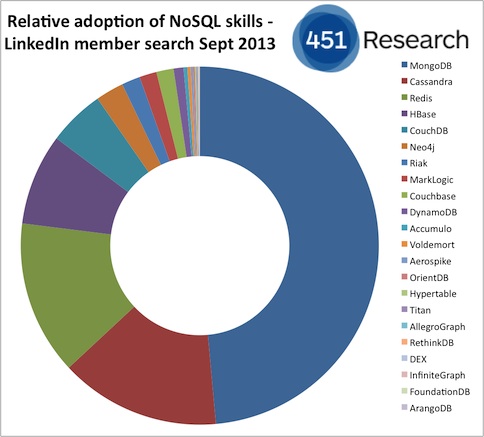 451 Group released their NoSQL skills index for September 2013. According to their analytics, displayed in the graphics below, MongoDB continues to grow as a leading NoSQL skill. MongoDB has extended its lead as the most popular NoSQL database according to mentions on LinkedIn profiles, which now account for 49% of all NoSQL technology mentions in LinkedIn profiles, compared with 47% in June. For more on 451's MongoDB skills analysis, visit their website. To learn more about NoSQL and MongoDB, check out the following resources below:

How We Implemented Freemium for MMS Backup Using Stripe

We recently launched a free usage tier for MMS Backup , our online backup service for MongoDB. We bill for backups on a monthly basis via credit card using Stripe , a MongoDB-powered service that makes it easy for developers to build applications that accept payments on the web. We wanted to offer a free usage tier so that customers could sample our backup service. To accomplish that, we decided to make any bill less than $5 complimentary. $5 would be enough to back up roughly 5GB with 100MB of oplog data. Once the bill exceeded $5, the customer would be charged the regular pay-as-you-go rate. Our backup service uses Stripe’s subscription billing capabilities. We couldn’t find any documentation or case studies on companies using Stripe to offer a freemium product. With some help from Stripe’s engineering team (thanks Michael Schade!), we were able to find a solution that satisfied our requirements. We investigated a few approaches before settling on using webhooks . At the completion of an invoice period, Stripe creates the invoice for the customer. We then receive an webhook for an "invoice created" event . When we receive this webhook notification from Stripe, we inspect the invoice. If the total bill is less than $5, we apply a negative invoice item in the amount of the invoice. This approach enabled us to quickly launch our free usage tier and we hope that it will be helpful to others looking to do the same. For more information, check out Stripe for your next app or start backing up your MongoDB deployment with MongoDB Management Service .