AWS re:Invent 2019 is just around the corner. If you’ve been in past years, you know there is always a lot going on – and if you haven’t, well, you’re about to find out!

There are a couple of general tips worth bearing in mind to survive a week in Vegas – stay hydrated, get plenty of sleep, that sort of thing. More specifically to getting the most out of re:Invent, you should already have planned out your schedule for the week. Remember that popular sessions fill up fast, so plan alternates that you can go to if your first pick is full. Many breakouts also have catch-up sessions at the end of the week, so you may be luckier the second time around.

To help you make the most of your time at re:Invent, we built a page to help you find all the good MongoDB events, whether those are formal breakouts, events in our booth, or party times after hours. Here are some of the highlights. 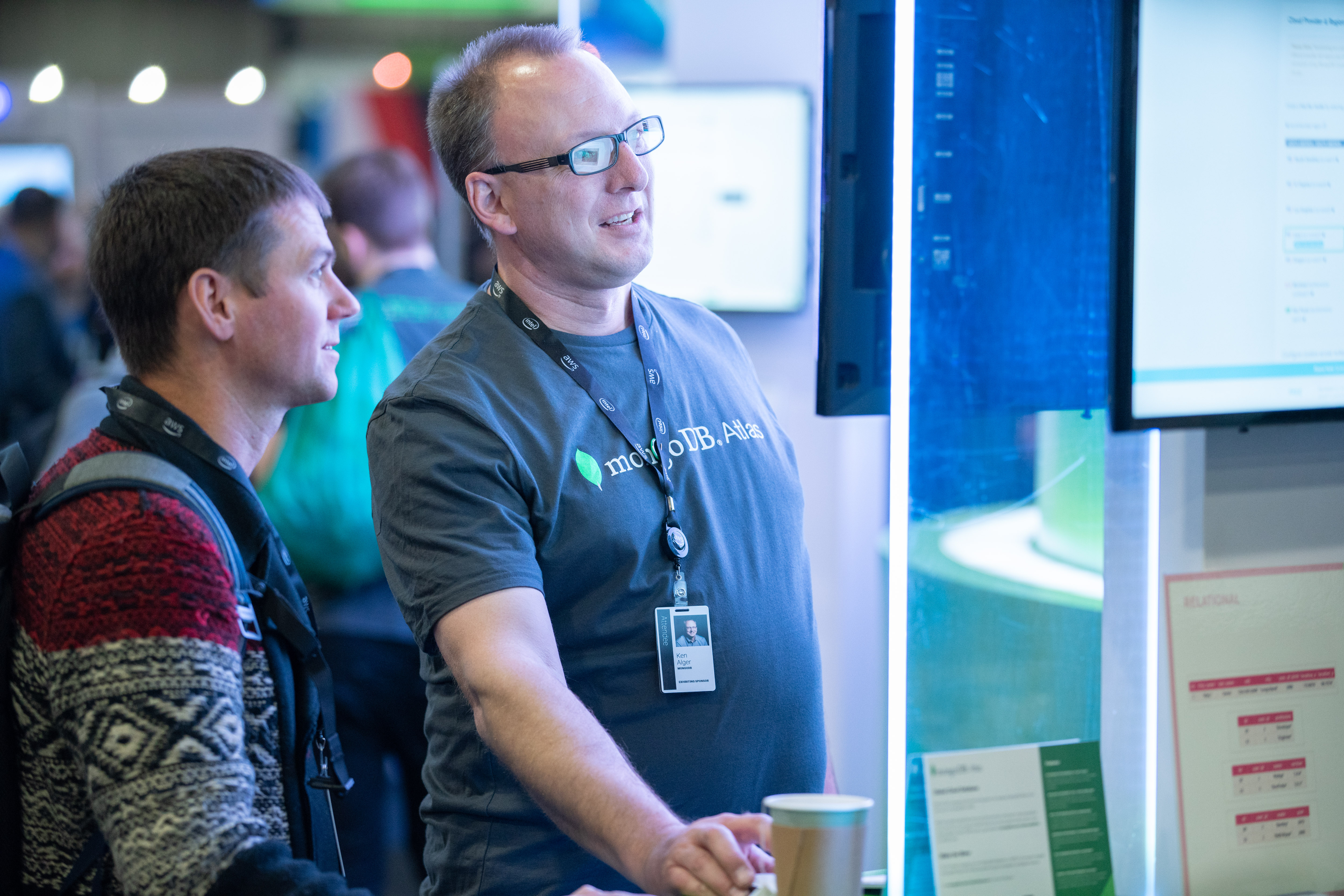 There are three breakouts that show how to address common problems using MongoDB, whether it’s using Amazon Textract to ingest unstructured documents, leveraging client-side field-level encryption to keep your (and your users’) data secure, or analyzing Amazon S3 documents in place without the need to transfer data or define schema.

On top of the formal agenda, do make time to visit the Expo in the Venetian. Yes, this is where the sponsor booths are, but you should be after more than just swag! Good vendor booths will give you the chance to talk to knowledgeable people about the particular problem you are trying to solve, and even get hands-on with their technology so you can get a feel for whether it could be a good fit for you.

Ease of use is key to everything we do at MongoDB, democratising access to data. The document model makes MongoDB the best platform for developers, since it matches the way that data is represented within applications. As part of the MongoDB booth, the Atlas Challenge will let you get hands-on with MongoDB Atlas, our fully managed, global cloud database service. Experience the power of the document model for yourself while carrying out real tasks against a live cluster. You'll configure Atlas database triggers, set up alerts, and interact with Stitch and Charts in a race against other re:Invent attendees to win a Nintendo Switch Lite! There will also be experts on hand to help you and answer your questions, whether about the Atlas Challenge exercises or about MongoDB’s platform in general. 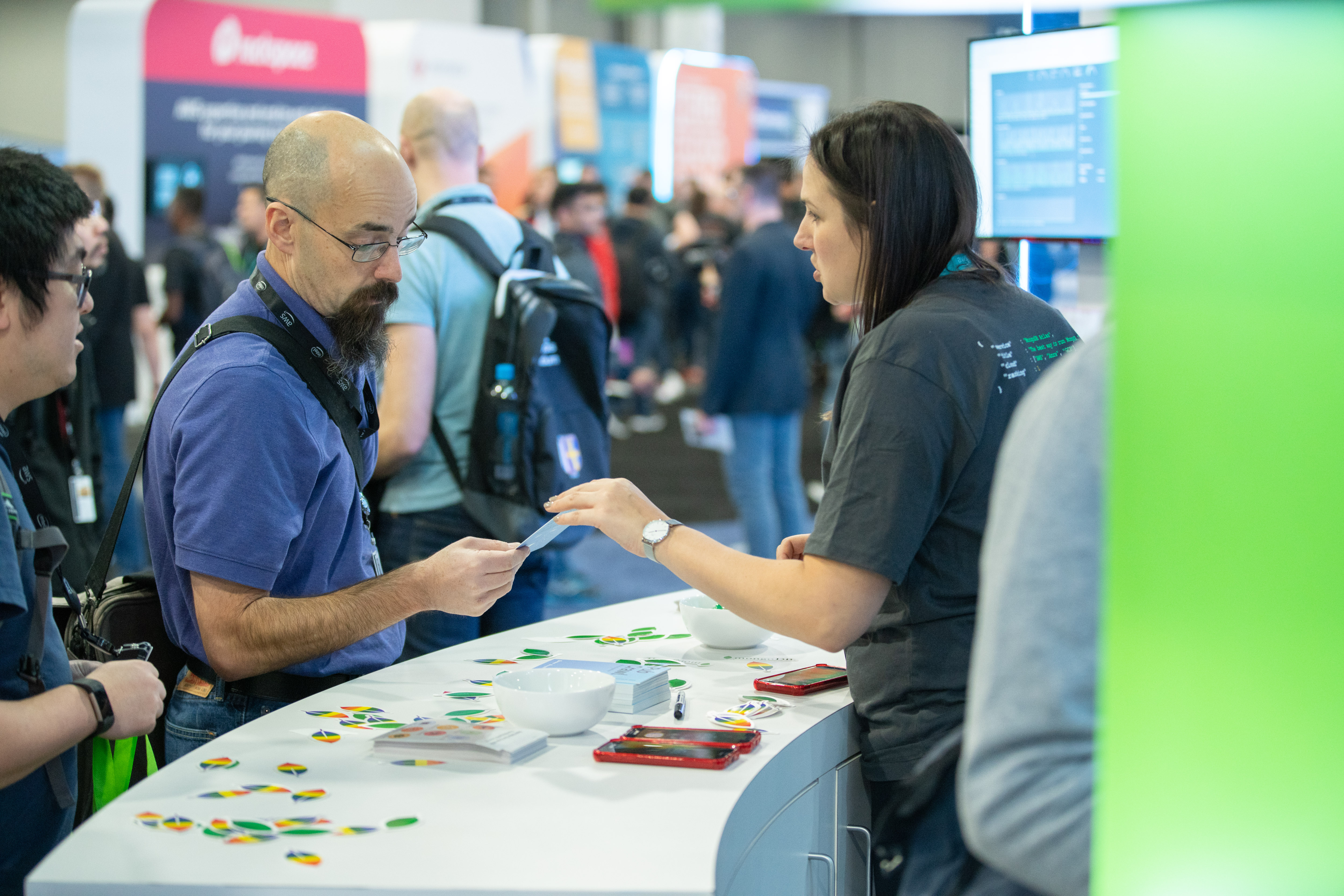 But the Venetian booth isn’t the only place to interact with MongoDB’s experts and technology. Don’t miss MongoDB’s booth in the Quad at the Aria, a “Builder’s Fest” inspired space dedicated to AI, ML, and IoT. At MongoDB’s booth in the Quad you can design your own temporary tattoos using a collaborative drawing app built using Realm, the client-side database, and edge to cloud sync technology, and MongoDB Atlas. Users will be paired with tattoo artists from Inkbox, the temporary tattoo company, to collaboratively create a custom tattoo which can be downloaded, shared, and ultimately mailed to you! 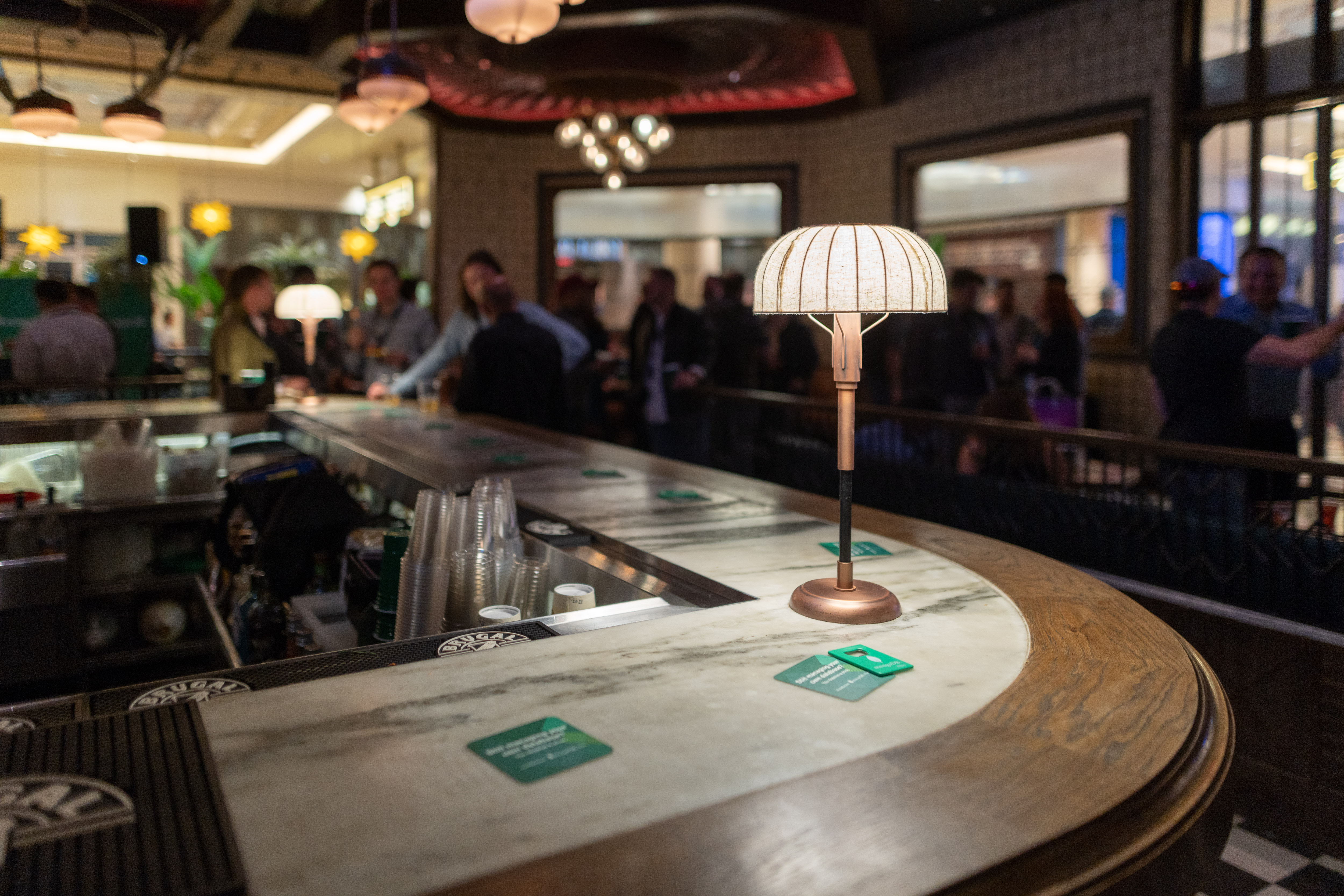 Beyond the core database, the MongoDB Cloud data platform is rounded out by complementary features to give developers all the capabilities they need. MongoDB Atlas, our fully-managed database as a service, is the core component, running across 18 Amazon AWS regions, as well as other cloud providers around the world, giving developers the greatest flexibility and geographic reach. And of course, being a DBaaS means it's easy, full-featured, and secure, without requiring huge ops overhead.

Serverless represents the next stage in the industry's migration to a more streamlined, managed, agile infrastructure. MongoDB Stitch is a serverless platform which accelerates application development with simple, secure access to data and services from the client – getting your apps to market faster while reducing operational costs and effort.

MongoDB’s full-text search makes it easier than ever to get score-ranked results for text-based data, integrating Apache Lucene, a powerful text search library and the most popular open-source language-focused search project in the world. Combined with built-in query operators, default score ranking and traditional MongoDB-native functionality means that with Atlas Full-Text Search you get the flexibility of MongoDB combined with the speed of Lucene.

Mobile development is a particular minefield, with variable latency, unreliable connectivity, and the possibility that the user or the mobile OS may simply shut your app down at any time. MongoDB Realm offers a new way to work with data on mobile, abstracting much of the complexity and letting developers focus on application functionality.

Finally, gathering data and running operational tasks is important, but soon users also need to run more strategic analytics queries. In the booth, we will also be showing the visualization capabilities of Charts, including its ability to create embedded live charts for use in your own website or mobile app. A recent addition to MongoDB’s analytics capabilities is Atlas Data Lake, which enables users to query data stored in S3 buckets directly, without the need to import it somewhere else or apply a schema first. By using this tool, users can make decisions based on the most recent relevant information, without worrying that they might be looking at stale data. Taken together, these analytics capabilities enable even more people to take advantage of the power of MongoDB, even without requiring development experience or support.

It wouldn’t be Vegas without at least one good party, and you won’t want to miss MongoDB’s Popup Playground Party on Wednesday night, co-sponsored by Confluent! Check out the details and request your ticket. The fun will include a glowing ball pit, DIY graffiti walls, and Vegas' hottest DJs, including The Hood Internet. See you there? 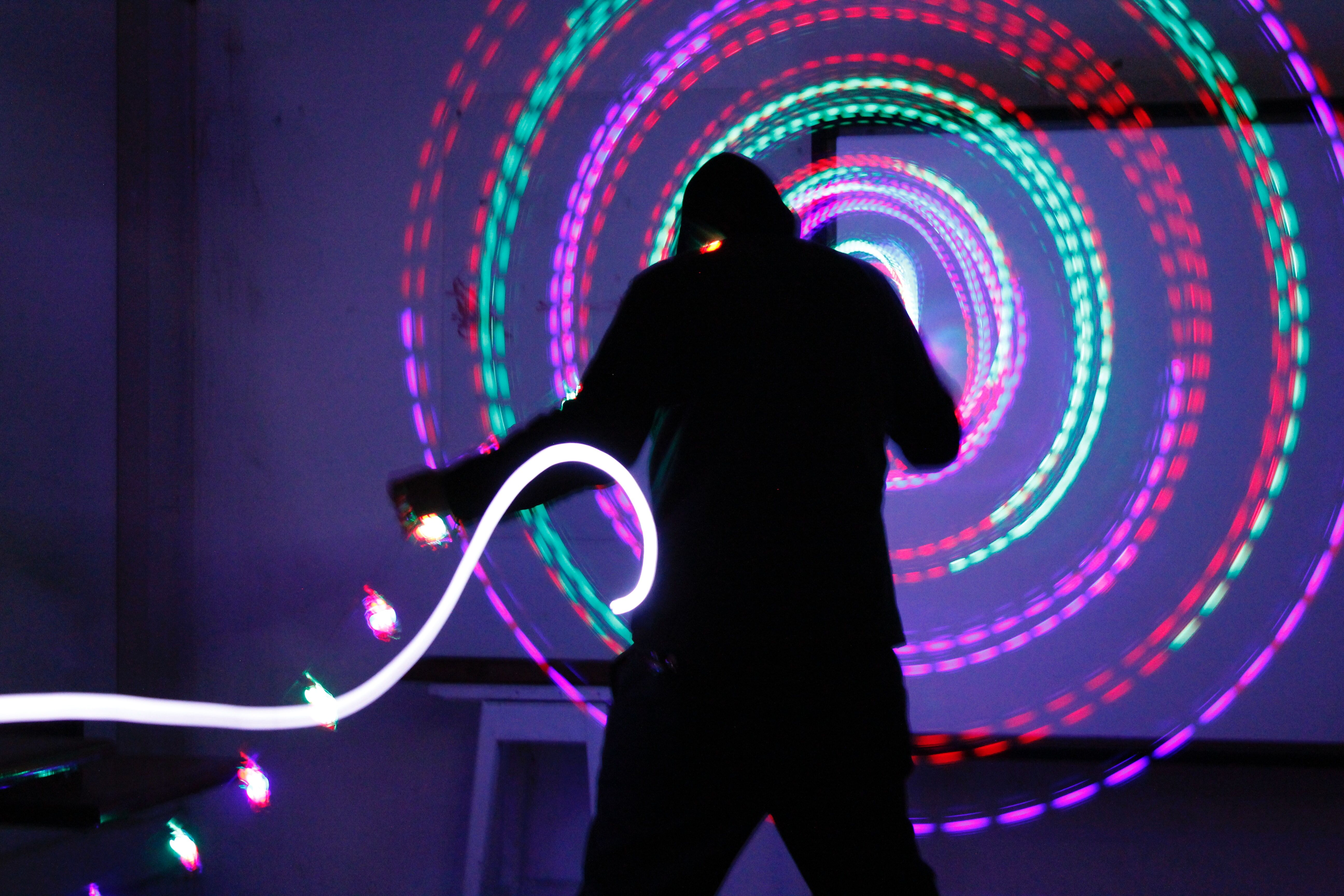 If you’re looking for something fun to do on Tuesday night then look no further than the restaurant reception with MongoDB, Gremlin, and Datadog in Sugarcane at 6:00 PM! Learn how we all three companies are elevating efficiency in monitoring, databases, and failure mode testing to provide value to organizations - all over drinks!

So there’s a taste of what to expect from MongoDB at AWS re:Invent 2019. See you in Las Vegas!

Learn how to update documents from a MongoDB cluster using the Java Driver.

MongoDB has achieved the formal FedRAMP® Moderate Authorized designation for MongoDB Atlas for Government (US) , the most secure way for the US Government to deploy, run, and scale MongoDB in the cloud. Additionally, MongoDB has worked with an independent auditor to validate our ability to support customers subject to Criminal Justice Information Services (CJIS) requirements regarding how sensitive data is created, viewed, modified, transmitted, disseminated, stored, and destroyed. MongoDB Atlas for Government Atlas for Government is an independent, dedicated environment of MongoDB Atlas for the US public sector, as well as ISVs looking to build US public sector offerings. This developer data platform – an integrated set of data and application services that share a unified developer experience – supports a wide range of use cases including transactional workloads, time series data, search, and petabyte data storage. Built on AWS and running in US AWS regions, Atlas for Government has been generally available since June 2021 and provides the simplest way to deploy, operate, and scale modern applications, all in a FedRAMP Moderate Authorized environment. Atlas for Government highlights include: MongoDB clusters deployed in AWS GovCloud or AWS US East/West (US) regions , and leverage the full functionality of MongoDB's document database, Atlas Search, fully automated backup, time series, and more. Guaranteed high availability with a ~99.995% uptime SLA which auto-scales up or down to accommodate fluctuations in data consumption, affording greater flexibility and cost control. Unparalleled security , with all security features built-in at no additional cost. Also, Atlas for Government is operated by MongoDB employees who are US persons on US soil. Support for both AWS GovCloud regions so customers can create multi-GovCloud region clusters and backups that stay within those regions and copy to both. ISVs can use Atlas for Government to store US government data and rapidly build their own FedRAMP offerings. All encryption within Atlas for Government is FIPS validated. These features make Atlas for Government uniquely positioned to support mission-critical applications across the US public sector. How MongoDB powers key use cases across the public sector MongoDB Atlas is already powering innovative applications in a number of sectors. And now, Atlas for Government is primed to power critical applications across public sector agencies and the ISVs that support them. Healthcare MongoDB is built to bring together data from disparate databases, systems, and data formats to create a single view of the patient. And with Atlas for Government’s dynamic schema, government agencies can enrich their view of patients with data from new sources, such as connected health devices. Both MongoDB and FHIR natively support the JSON format, the standard that supports rich data structures and objects prevalent in healthcare such as patient data, claims, policies, and treatment information. Financial services Agencies that participate in financial services activities must fully commit to digital transformation – liberating data, empowering developers, and embracing disruption — to keep up with the expectations of instantaneous transactions. Whether it's trading platforms and end-to-end digital loan origination, or AI/ML-driven fraud detection systems and financial 'super apps', Atlas for Government enables innovation and speed for government agencies that conduct payments and core banking applications. Federal, state, and local government National, regional, and local governments are facing pressing challenges with rising costs, changing regulations, and complex technological demands. The traditional systems currently in place are expensive and improperly equipped to handle modern needs for scale, cost efficiency, and flexibility. Atlas for Government opens doors for new initiatives like building smart cities, planning for traffic and construction updates, and improving the welfare of citizens. Education From groundbreaking data-based research to the administrative management of schools’ complex ecosystems, proper data management can transform how educational institutions operate. A modern data platform helps institutions navigate complex challenges like providing continuous learning, teaching with limited resources, and retaining students and staff. Atlas for Government offers an intuitive, secure, cost-effective solution for institutions dedicated to all stages of education. How do I get started? Customers can fill out the form on the MongoDB Atlas for Government page and a MongoDB specialist will get in touch with further details to set up. The specialist will help you set up Atlas for Government clusters (US) and you can either launch a new workload, migrate your existing Atlas workload to Atlas for Government, or re-platform your existing workloads by engaging with our professional services. Please also refer to the technical documentation for Atlas for Government for more details, or learn more on MongoDB University .