As announced at MongoDB World ‘17, MongoDB Atlas, the database-as-a-service provided by the creators of MongoDB, is now available on the three major public cloud providers: Amazon Web Services, Google Cloud Platform and Microsoft Azure. In this blog post, I’ll cover the integration of Microsoft Azure Functions with MongoDB Atlas from a developer standpoint.

What are Azure Functions? In a nutshell, Azure Functions are the core building block of Microsoft’s serverless technologies, similar to AWS Lambda and Google Cloud Functions. You can write your Azure Functions code in a variety of languages and execute it at scale without worrying about the underlying virtual machine and operating system.

That’s not very different from other cloud vendor offerings, but what seems to be unique about Azure Functions is Microsoft’s promise to open source the Azure Functions Runtime, which means that we could theoretically run Azure functions anywhere - on Azure, on private data centers or in other cloud providers. At the time of writing, we have yet to see whether Microsoft will deliver on that promise). To their credit, Microsoft already provides tools to run and debug Azure functions locally, as we’ll see below.

In this post, I’ll introduce you to the process I recommend to create an Azure function with Visual Studio. I’ll also show how to leverage the .NET MongoDB driver to perform CRUD operations on a fully-managed MongoDB Atlas hosted on Azure.

Specifically, I will take you through the following steps:

Set up your development environment

When installing Visual Studio 2017, make sure you select the Azure development workload (as well as any other workload you wish to install). 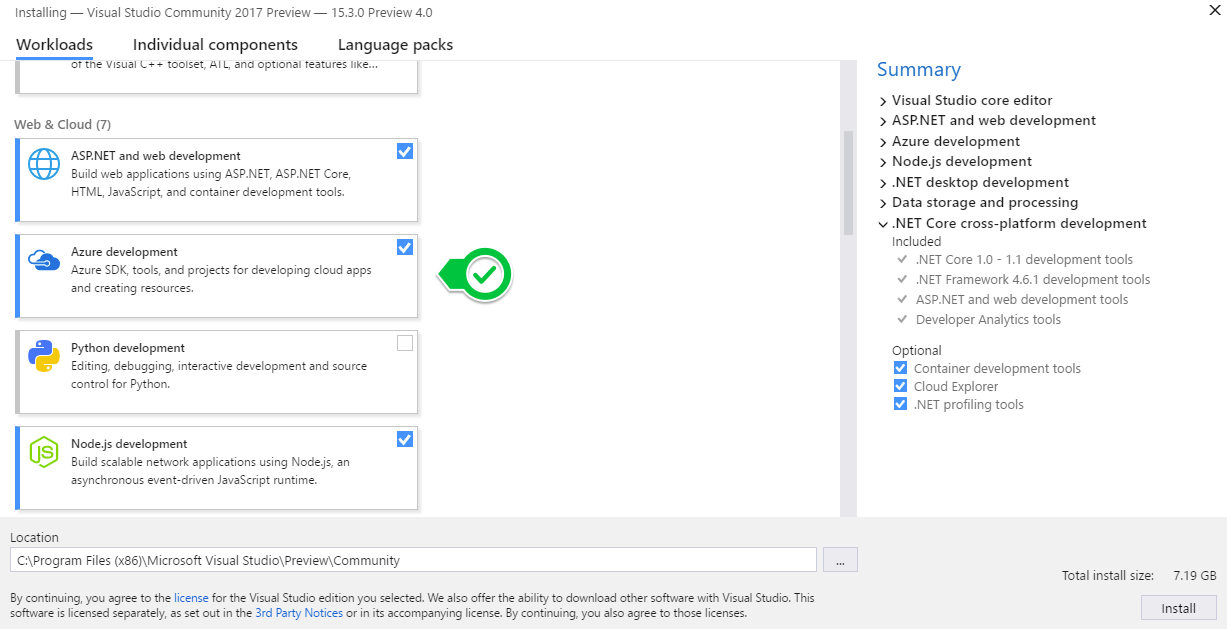 At the time of writing, the Azure Functions Tools for Visual Studio 2017 must be installed as a Visual Studio extension. Please refer to Microsoft’s documentation for detailed installation instructions.

Azure Functions offer a wide choice of programming languages, such as C#, F#, Node.js, Python, PHP and more. Given that C# is the language of choice of most Microsoft developers, this tutorial will focus on developing and deploying an Azure function using C#.

Open Visual Studio 2017 and select File → New → Project. Select the Azure Functions project type and give your project a name (for instance MongoDB.Tutorials.AzureFunctions).

Next, right-click on your project in the Solution Explorer and select Add → New item. Select the Azure Function item and give it a name such as CreateRestaurantFunction.cs (the file name doesn’t matter as much as the function name, as we’ll see below). 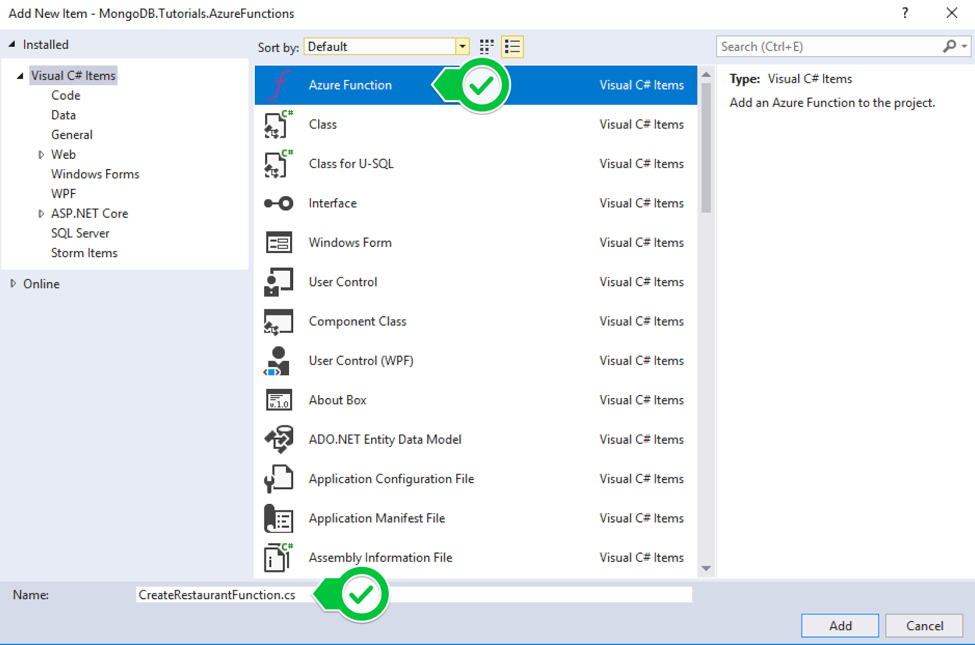 A new window appears and lets you choose the type of Azure Function you would like to create. Let’s keep it simple for now and choose the HttpTrigger function type, which will allow us to use our function as a REST API we’ll be able to call from cURL, Postman, or any custom application.

Select Anonymous in AccessRights (you will be able to change this later) and name the function CreateRestaurant. 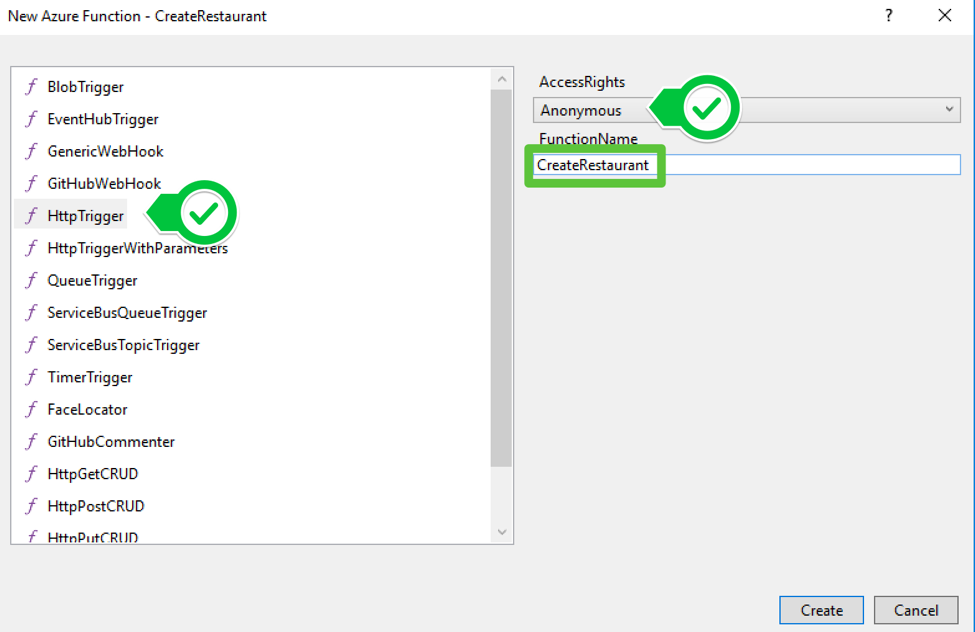 Since we only want to use this function to create a document in MongoDB, let’s remove the get parameter and let’s keep the post parameter. 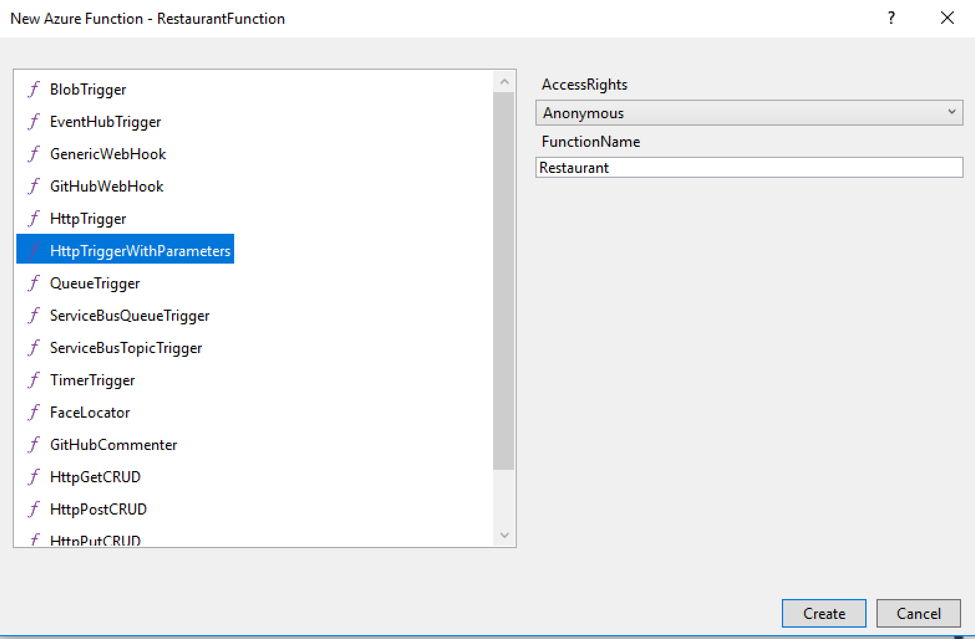 Now that our 2 functions are set up, let’s move to the meat of this blog post: interact with MongoDB Atlas by writing CRUD queries. In order to write any C# application connected to a MongoDB database, you need the MongoDB .NET driver. An Azure function is no exception to the rule so let’s go ahead and install it with NuGet. Right-click on your Visual Studio project and select Manage NuGet Packages. In the NuGet Package Manager, select the Browse tab and search for MongoDB. In the search results, select MongoDB.Driver, make sure you choose the latest version of the driver and press Install (v2.4.4 at the time of writing).

The MongoDB .NET driver requires dependent assemblies (MongoDB.Bson and MongoDB.Driver.Core) so accept the Apache 2.0 license for these 3 libraries: 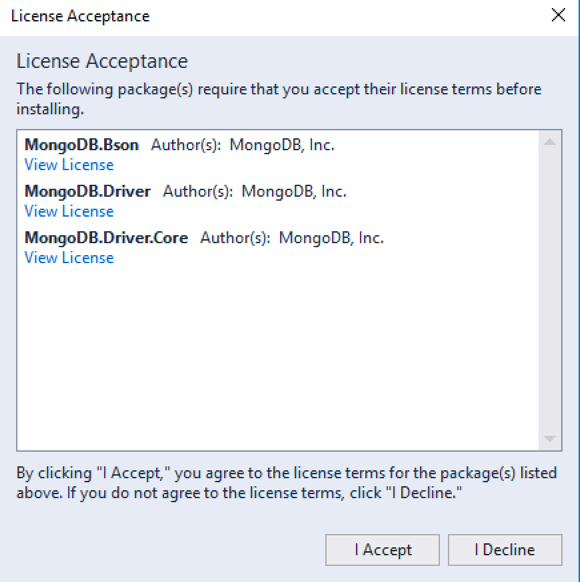 The MongoDB driver also depends on the System.Runtime.InteropServices.RuntimeInformation assembly (v4.0.0), which the current version of the Azure Function Tools don’t automatically import with the MongoDB.Driver package (as other Visual Studio project types do). We therefore need to explicitly import it with NuGet as well:

Once that’s done, edit the CreateRestaurantFunction.cs file, and add the following using statements:

Next, delete the content of the Run(...) method in the CreateRestaurantFunction.cs file and replace it with the following:

Replace the entire content of the RestaurantFunction.cs file with the following code:

Note that I made several changes to that function. Namely, I changed the signature of the Run() method to make it asynchronous and I enabled it to handle GET, PATCH and DELETE http requests (as mentioned above).

Note also the RunPatch() of the code where I make use of the BsonDocument and UpdateDefinition objects to update an existing document given an arbitrary (but valid) JSON string:

This would allow me to update the cuisine and borough properties of an existing document by sending the following JSON to the /api/Restaurant/[restaurantId] endpoint of the function:

The same piece of code would also be able to update the zipcode and building property of the address sub-document by setting JSON attributes with dot notation:

Note that if you prefer to use sub-document notation, such as

then you should use a simpler form (in order to preserve the sub-document attributes you don’t update):

At this point, our function doesn’t compile because it misses an additional, singleton RestaurantsCollection class, responsible for instantiating a MongoDB database connection and returning a reference to the restaurants collection. The purpose of this class is two-fold:

Indeed, an Azure function has the ability to reuse the same underlying operating system it uses as its core runtime across close enough calls, thereby allowing us to reuse any database connection we’ve already established in a previous call.

Add a RestaurantsCollection.cs class file add paste the following content into it:

The last step is to configure our function so it can connect to MongoDB. To do so, edit the local.settings.json file and add a MongoDBAtlasURI attribute inside the Values nested document:

You can retrieve your cluster’s connection string from the MongoDB Atlas portal by pressing the Connect button on your cluster page:

Next, you should press the Copy button to copy your MongoDB Atlas URI to your clipboard: 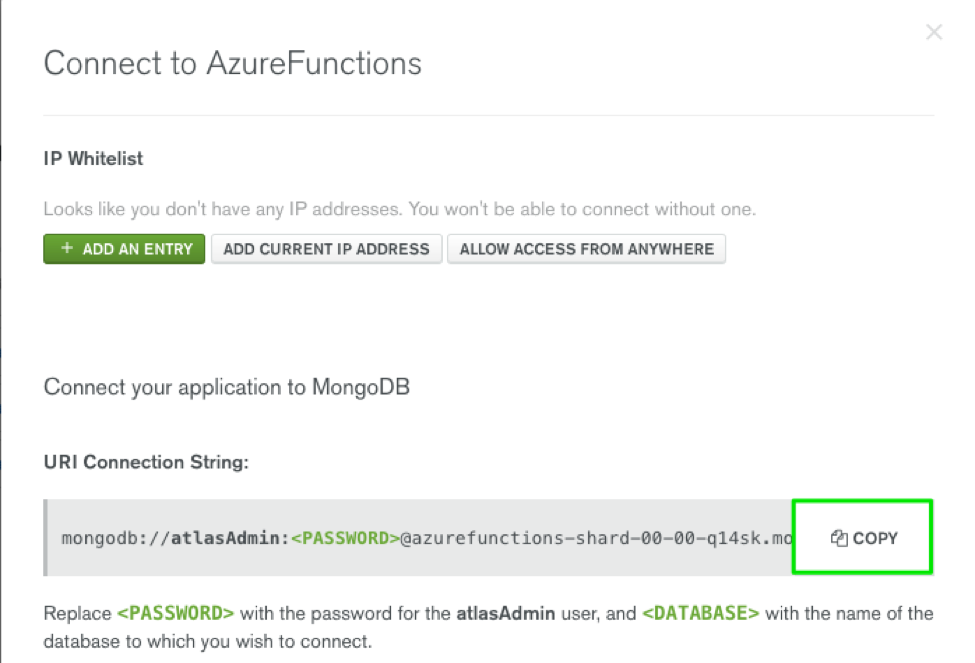 Then paste it to the local.settings.json file and modify it to match your needs. If you chose Microsoft Azure to host your 3-node MongoDB Atlas replica set, the format of your connection string is the following:

While you’re at it, press the Add current IP address button to allow your current machine (or virtual machine) to access your MongoDB Atlas database: 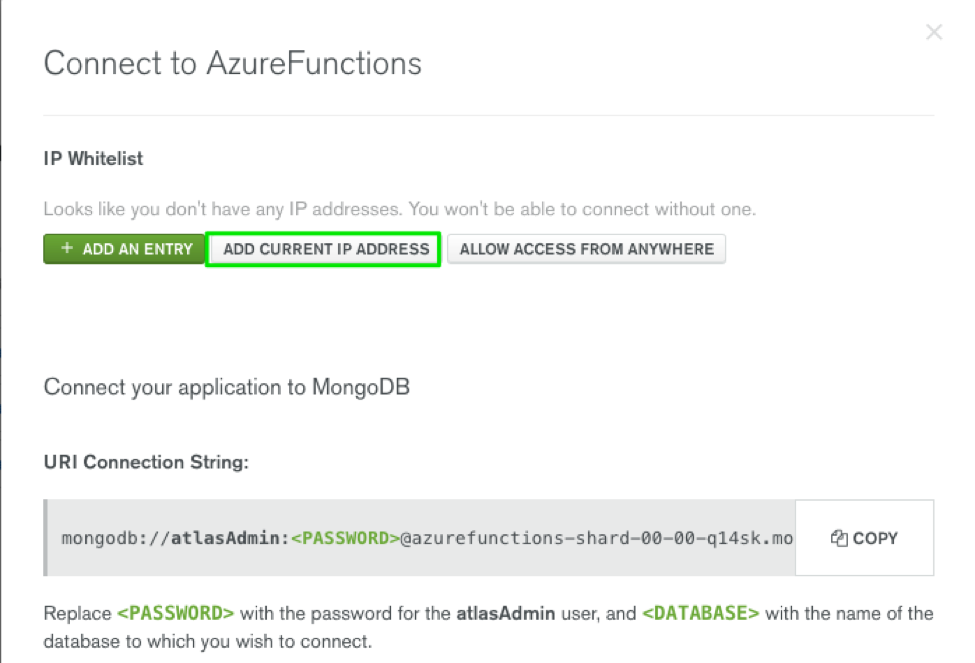 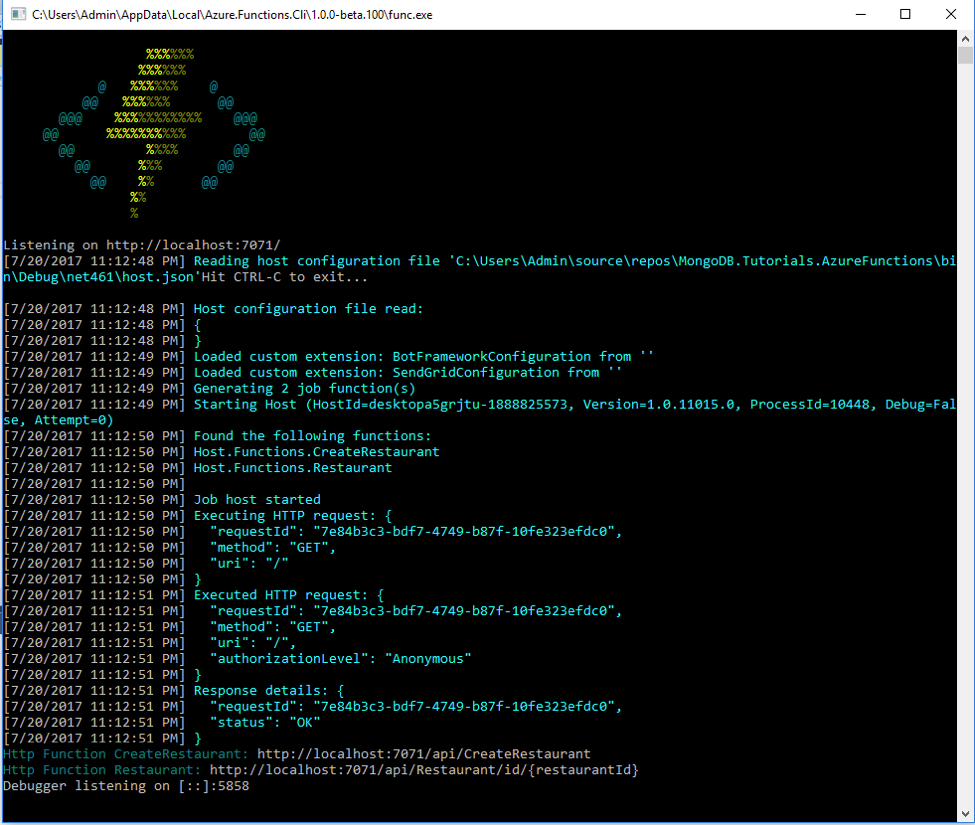 Now run the following cURL commands (cURL is available with Cygwin, for instance) or use Postman to craft the equivalent commands.

To create a restaurant document, run:

If you used Postman, you should get a 200 OK result: 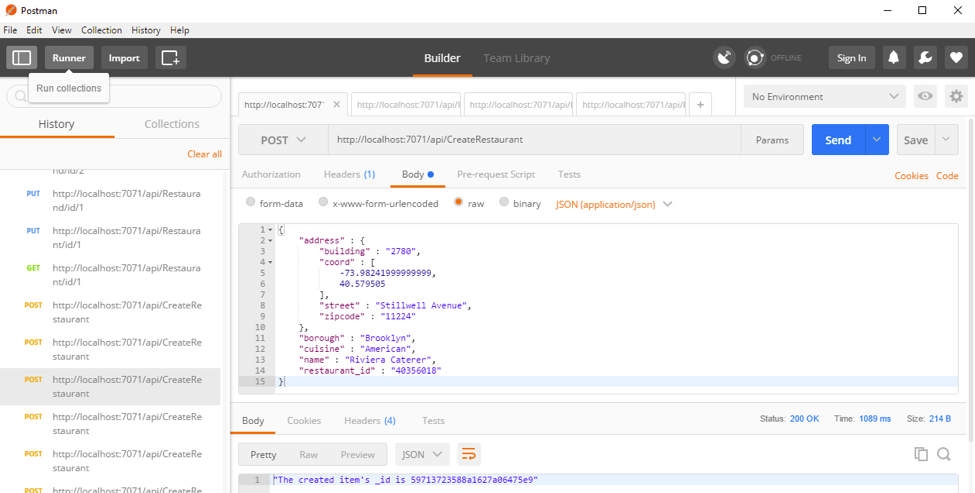 Now, try to retrieve the restaurant by running the following curl command:

Next, you can try to update the restaurant by issuing a PATCH request:

Last, delete the restaurant with a DELETE Http request:

Now that we’ve verified that all the tests above are successful, let’s move forward and deploy our function to Azure. You can deploy your Azure function using Continuous Integration (CI) tools such as Visual Studio Team Services (VSTS) or the Azure CLI, but we’ll take a simpler approach in this post by using the Graphical User Interface available in Visual Studio 2017.

The Create App Service wizard appears and lets you configure your Azure App Service name, as well as the subscription, resource group, app service plan and storage account you want to use for that function: 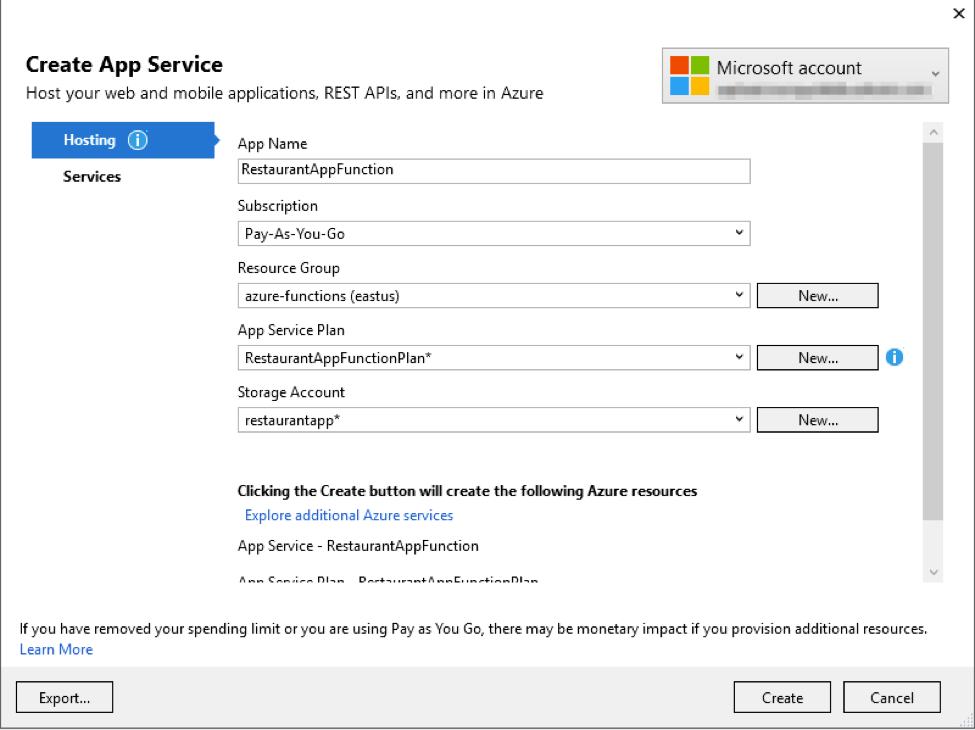 When you’re done configuring all these parameters, press Create.

Configure and test the Azure function running on Microsoft Azure

The Visual Studio deployment process publishes pretty much all of your Azure Function artifacts, except the local.settings.json file where we configured the MongoDB connection string.

In order to create it on Azure, head over to your Azure function in your Azure portal and select the Application Settings link:

In the App Settings section, add the MongoDBAtlasURI key and set the value to a valid MongoDB Atlas connection string.

We’re not done yet though. Unless you have allowed any IP address to have access to your database cluster, we must configure the IP Whitelist of your Atlas cluster to let Microsoft Azure connect to it. To do so, head over the Platform features tab and select Properties.

In the properties tab, copy the comma-delimited list of IP addresses and enter each one of them in your Atlas cluster’s IP whitelist. 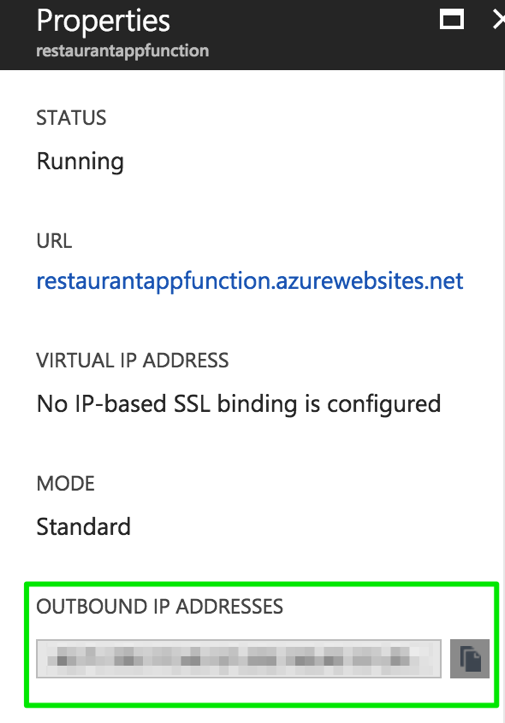 Once you’re done, your cluster’s IP Whitelist should have 5 Azure IP addresses along with your local machine’s IP address: 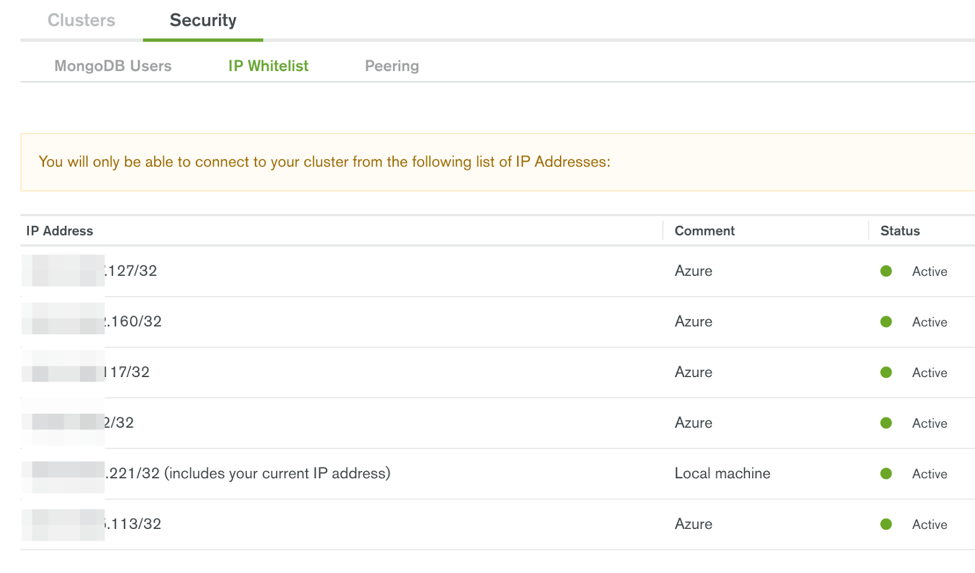 You can now replace the http://localhost:7071 url you used in your cURL scripts or Postman with the url of your published Azure function (such as https://restaurantappfunction.azurewebsites.net) to test your published Azure function. The screenshot below shows the successful result of an /api/CreateRestaurant call in Postman, which is evidence the published version of Azure Function was able to connect to MongoDB Atlas. 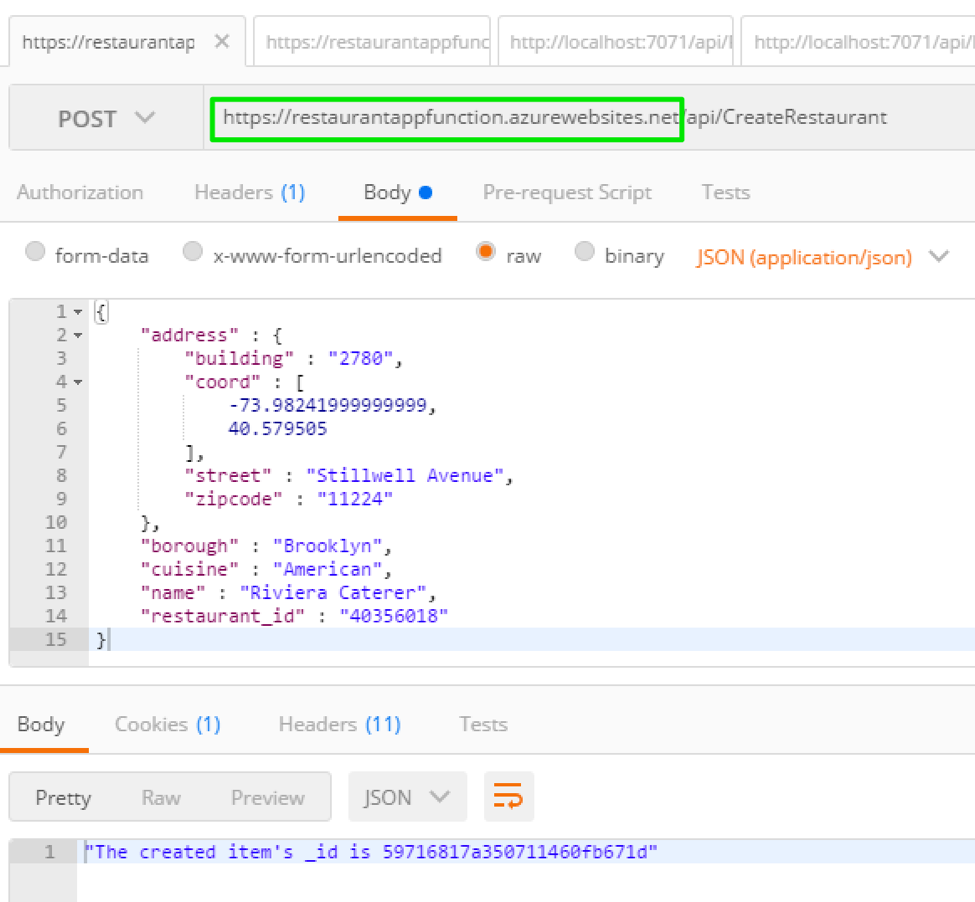 I hope you have found this tutorial helpful to get started with Azure Functions and MongoDB Atlas. Cherry on the cake, you can find the complete source code of this tutorial on GitHub.

As a next step, I suggest that you download MongoDB Compass to visualize the documents you just created in your MongoDB Atlas database cluster with our CreateRestaurant Azure Function. Here’s a small tip: if you just copy an Atlas connection string to your clipboard and start MongoDB Compass, it will automatically detect your connection string and offer you to pre-populate the login screen. Pretty neat, no?

If you’re planning to use Azure Functions for a production deployment, you might also be interested in the available continuous integration deployment options offered by Microsoft. And if you don’t already have your MongoDB Atlas cluster, sign up now and create a MongoDB cluster on Microsoft Azure in minutes!

Modernizing Applications to MongoDB with Wipro and Informatica

Learn how to combine MongoDB with Wipro and Informatica