In this article we will give an overview of the motivations behind SCRAM's design, a basic analysis of its security properties, and a tutorial on how to use it in MongoDB.

Authentication requires clients to provide a proof of identity in order to access the database. MongoDB 3.01 provides 3 types of authentication mechanisms:

We consider an adversary that can capture and generate arbitrary network traffic, and inspect the contents of a server's on-disk storage. However, we assume our adversary to be computationally bound so it cannot compromise any standard cryptographic primitives, such as secure hash functions.

Here are some attacks on SCRAM that follow from this threat model. These attacks provide justification for SCRAM’s design, as it is specifically intended to counter them.

In the second part of this article, we’ll provide a detailed analysis of SCRAM’s resistance to these attacks.

This is an overview4 of the SCRAM client-server protocol. Please see RFC 5802 for the complete version.

In the description of the protocol we will use the following primitives:

To create an identity on the server, an administrator executes the createUser command, specifying the plaintext username and password.

The server first applies the key derivation function to compute the SaltedPassword.

The server then calculates the ClientKey.

The server then hashes the ClientKey to compute the StoredKey.

The server then stores the following information7:

The StoredKey is a cryptographic digest of the ClientKey. The ClientKey is itself a cryptographic digest of the salted password. The key idea of the StoredKey is that is can be used to verify a ClientKey without having to store the ClientKey itself. The ServerKey can be derived from the client's password (but not the other way around). It serves as evidence that the MongoDB server at one time had access to the client's plaintext password.

Now we detail the exchange of messages between the client and server during an authentication session. Some of the values used are the same as those computed by the server when it generates the credential. In those instances we refer the reader to their initial definitions above.

Here is the complete set of messages exchanged: 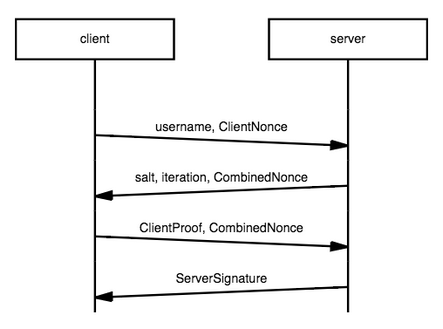 Step 1: The client initiates a SCRAM authentication session
The client sends an authentication request to the server containing username and a random number (called the ClientNonce) used to prevent replay attacks.

Step 2: The server issues a challenge
The server first retrieves the user's credential, and responds with a message containing a salt, iteration count, and the CombinedNonce, a concatenation of the ClientNonce and an additional ServerNonce generated by the server.

Step 3: The client responds with a proof
The response to the challenge is a message containing the ClientProof and the CombinedNonce. The ClientProof allows the client to prove that it has possession of the ClientKey without having to send it over the network.

To compute the ClientProof, the client first computes the StoredKey and ClientKey in the same same manner as the server when it initially generates the credential.

The client then computes the ClientSignature using the StoredKey and the AuthMessage. AuthMessage is just a concatenation of the client's initial message, the server's challenge, and the client's response (without the ClientProof).

The client then calculates the ClientProof by performing a bitwise xor of the ClientKey and the ClientSignature.

As the server can compute the ClientSignature using the information stored in its credential, the bitwise xor with the ClientKey, which is not stored by the server, prevents the server from being able to forge a valid ClientProof.

If this equation holds, the server has proof that the client has access to the ClientKey10. After verifying the ClientProof, the server generates its own proof.

The server then replies to the client with the ServerSignature.

Now that we understand how SCRAM works under the hood, in the next post we’ll take a closer look at how SCRAM addresses several common types of attacks. In the interim, if you’re looking for more information about securing your MongoDB deployment, download our Security Architecture Guide. It includes details about MongoDB’s security features and provides a security configuration checklist:

Adam Midvidy is an engineer on the MongoDB Platforms team with an interest in cryptography.

Today we are announcing MongoDB 3.0. This release marks the beginning of a new phase in which we build on an increasingly mature foundation to deliver a database so powerful, flexible, and easy to manage that it can be the new DBMS standard for any team, in any industry. MongoDB 3.0 brings with it massive improvements to performance and scalability, enabled by comprehensive improvements in the storage layer. We have built in the WiredTiger storage engine, an incredible technology with a distinguished pedigree. WiredTiger was engineered with latch-free, non-blocking algorithms to take advantage of trends in modern hardware, like large on-chip caches and heavily threaded architectures. By drawing on both academic research and their extensive commercial experience, the WiredTiger team built a storage engine that can underpin the next 20 years of data storage applications. With WiredTiger, MongoDB 3.0 introduces document-level concurrency control, so performance remains fast and predictable under concurrent, write-intensive workloads. Transparent on-disk compression reduces storage requirements by up to 80%, and a choice of compression algorithms means that developers can tailor the performance/space trade-off to suit the needs of particular components in their applications. MongoDB's original storage engine has been enhanced, including collection-level concurrency control and more efficient journaling. Now called MMAPv1, the default storage engine is a binary drop in that provides more efficient and concurrent handling of workloads. We are currently running the production infrastructure of MongoDB Management Service on MongoDB 3.0 replica sets, mixing both MMAPv1 and WiredTiger storage engines. This type of flexibility is possible because MongoDB 3.0’s pluggable storage engine API addresses the reality that there is no single storage engine perfect for all applications. Through this architecture, MongoDB provides an easy to use, high-level layer for application development, durability, and horizontal scale, while allowing lower-level storage engines to offer solutions engineered for specialized use cases. The storage engine API means that MongoDB can thrive in any environment, such as in-memory, encrypted, HDFS, or hardware-optimized, to name but a few. In fact, MongoDB can now be used as a laboratory for storage engine development. Delegating higher-level concerns to MongoDB lets storage engine developers focus on their domain of expertise, and lets a massive installation base of MongoDB users take the new engine for a spin just by adding a replica set member. As with all infrastructure, MongoDB needs to be managed. We know this can be a challenge at large scale, so with MongoDB 3.0, we are giving enterprises Ops Manager, an on-premise product that makes MongoDB a first-class citizen of the mature operations ecosystem. Ops Manager makes routine tasks push-button, eliminating the vast majority of work that operations teams must do to manage MongoDB. It doesn't try to replace existing automation or provisioning tools, rather, it supports and supplements them, so ops can focus on architecture, not plumbing. Ops Manager's API means it can be integrated into existing tooling for monitoring, backup and management. MongoDB 3.0 is a landmark release. It brings comprehensive improvements in performance, flexibility, ease of management, and cost to operate. MongoDB has always made it fast and easy to iterate -- from prototype to production to maturity, keeping pace in the most agile environments. Taken as a whole, the changes in 3.0 remove bottlenecks and obviate workarounds, suiting MongoDB to an even wider variety of applications, and providing teams the confidence to run it in more mission critical situations. MongoDB 3.0 is a true contender for the title of "default database" in any organization. This is just the beginning. We will strengthen the case for MongoDB as your default database with every iteration. We will continue to surface advanced features of WiredTiger such as Log Structured Merge Trees. We will continue to push the envelope in data interaction semantics, by implementing a transaction system for the distributed document model. And we will iterate aggressively on Ops Manager, to make sure that operating MongoDB is as effortless as it is to develop with. MongoDB 3.0 will be generally available in March, when we finish putting it through its paces. Stay tuned for our latest release candidate , we would love it if you would try it out and give us feedback. If you’re considering updating your version of MongoDB, take a look at our Major Version Upgrade consulting services: Upgrade with Confidence