Even small organizations struggle with change. But imagine that you have 103 million retail customers, roughly 1700 retail locations to serve them, and $81 billion in revenues at stake. Change necessarily comes hard to a company of that scale and reach.

The Times They Are a-Changing

In an organization the size of Verizon Wireless, the business needs are constantly growing and changing, as Shivinder Singh, Senior Systems Architect at Verizon Wireless, told an audience at MongoDB World 2014. These forces push Verizon Wireless to explore new and innovative ways to process manage its data as it seeks to drive greater customer value for its customers. 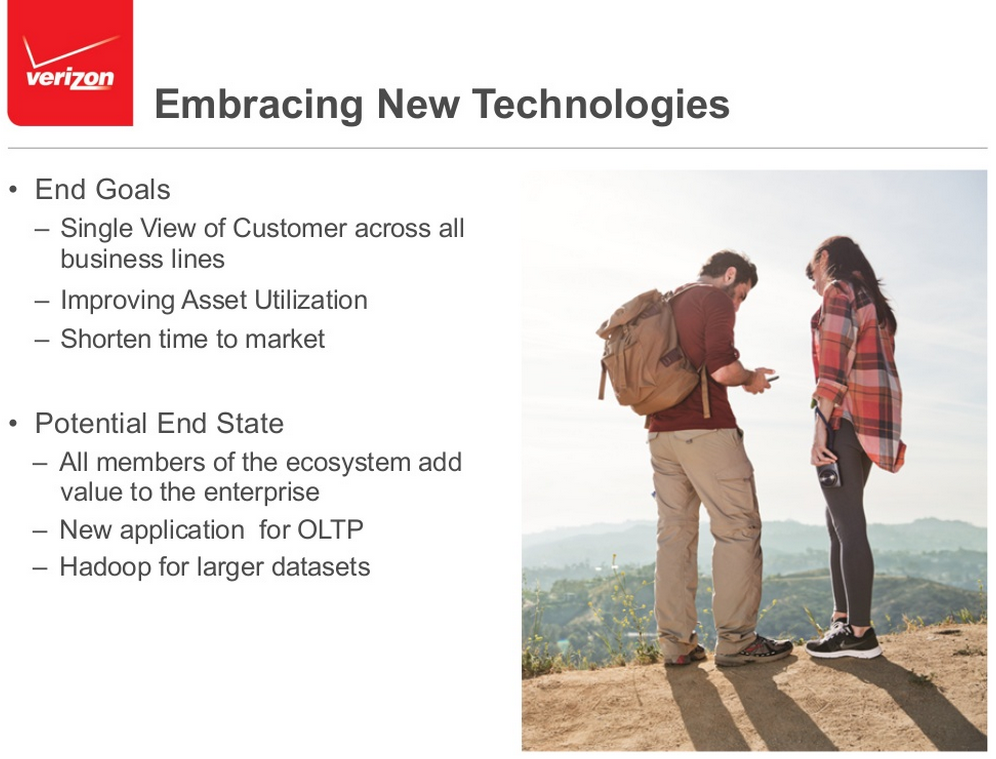 One of those "new and innovative ways" is MongoDB, which helps Verizon Wireless get greater value from its data while simultaneously accelerating time-to-market and improving its asset utilization.

As the company looks to augment its existing technologies, however, there's always a fair amount of trepidation, not to mention the ever-looming question: why can't we just do this with the technologies we already own and/or know?

Data is changing. The world of relational databases at times doesn't fit the new world of unstructured or semi-structured data.

Traditional technologies which at times would require a dedicated resource weeks to setup a environment could be achieved fairly quick with MongoDB. In a certain case, with MongoDB Verizon Wireless was "able to do that in two hours."

Even so, Verizon Wireless discovered that one of the biggest challenges in moving to MongoDB was to "unlearn" RDBMS concepts and change the mindset to embrace new MongoDB and NoSQL concepts.

But we're getting ahead of ourselves here. How did Verizon Wireless start using MongoDB?

Getting Started With MongoDB

Verizon Wireless opted to start small with MongoDB, though it did try before it bought, one of the cardinal virtues of open source. (More on that below.) The company decided to augment its employee portal, a business critical application that is "basically the homepage of anyone who works for Verizon." 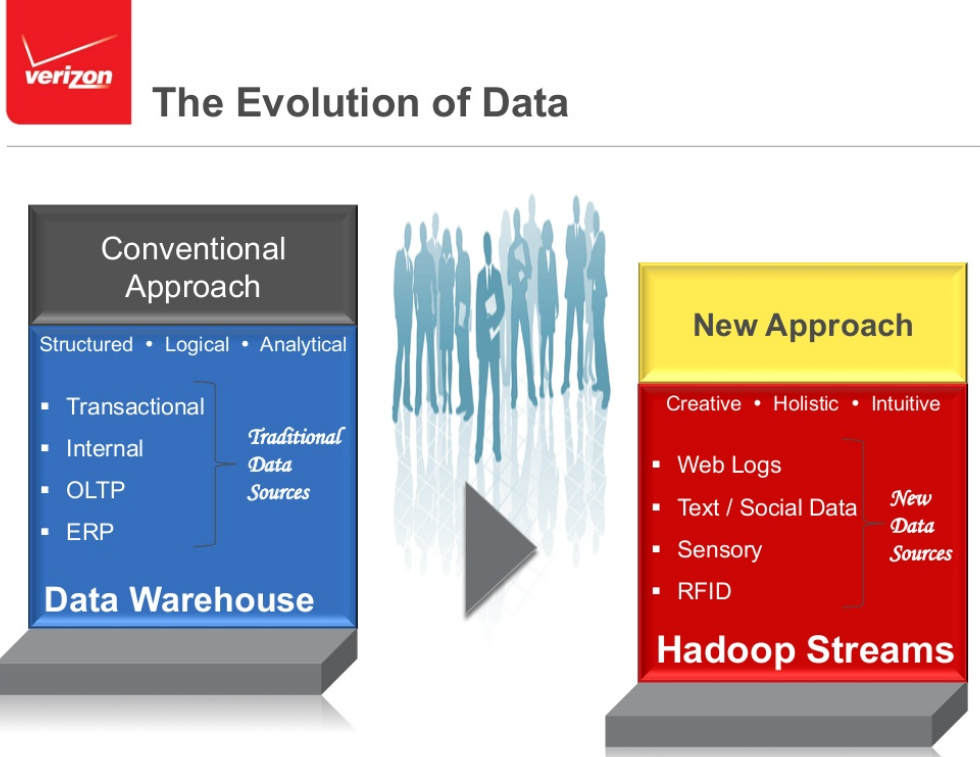 The existing portal was good, but Verizon Wireless wanted to build in new functionality to capture social feeds from Twitter and Facebook and display it specific to that user.

Not so easy for a relational database.

To bring himself up-to-speed with MongoDB, Singh took the route that over 200,000 other people have taken: MongoDB's free online training.

As he describes it, within two days he was at a level that he could comfortably manage MongoDB. Within just two weeks he had re-architected Verizon Wireless' entire development set-up to be in a replicated cluster versus a standalone cluster.

He then proceeded to test and break the cluster, recover it, test the recovery, test failover capabilities and more.

But Singh wasn't done yet.

Putting The MongoDB Team To The Test

Going with a new technology can be risky, but choosing a new technology vendor to support is perhaps even more so. To minimize that risk, Singh decided to put MongoDB - the company - to the test. So Singh did what any other conscientious would-be buyer would do: 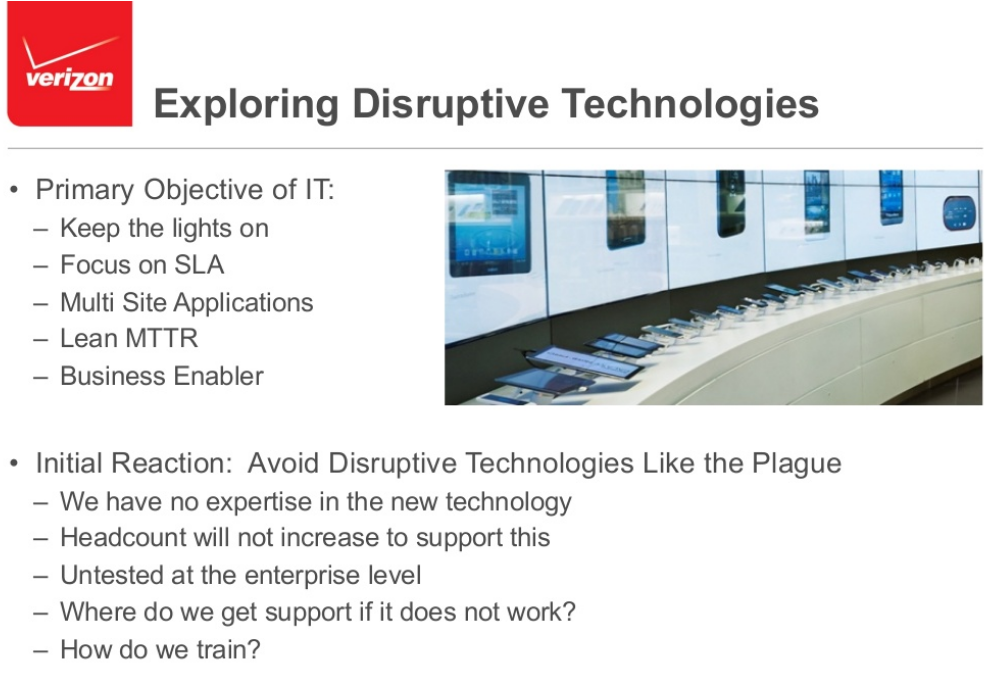 He faked his death.

Well, not his death, per se, but the death of his server (along with the secondary data center, just to make things doubly interesting). Of course MongoDB would quickly respond to a marquee customer like Verizon Wireless, however, so he also faked his identity, using an @yahoo.com email address.

In other words, MongoDB's support team got a call from some no-name person with a generic email address claiming "my-server-is-down-the-world-is-on-fire-someone-help-me-NOW!"

Within "a short period of time" MongoDB had assembled its engineers to resolve the issue and get Verizon Wireless back on track. Only then did the MongoDB team learn the real identity of Singh and win the deal.

The Future Of MongoDB At Verizon Wireless

Looking forward, Verizon Wireless has already started a new proof of concept for an online log management system. Not surprisingly, Verizon has "some huge servers, some huge clusters, and all of them generate a huge amount of log data." 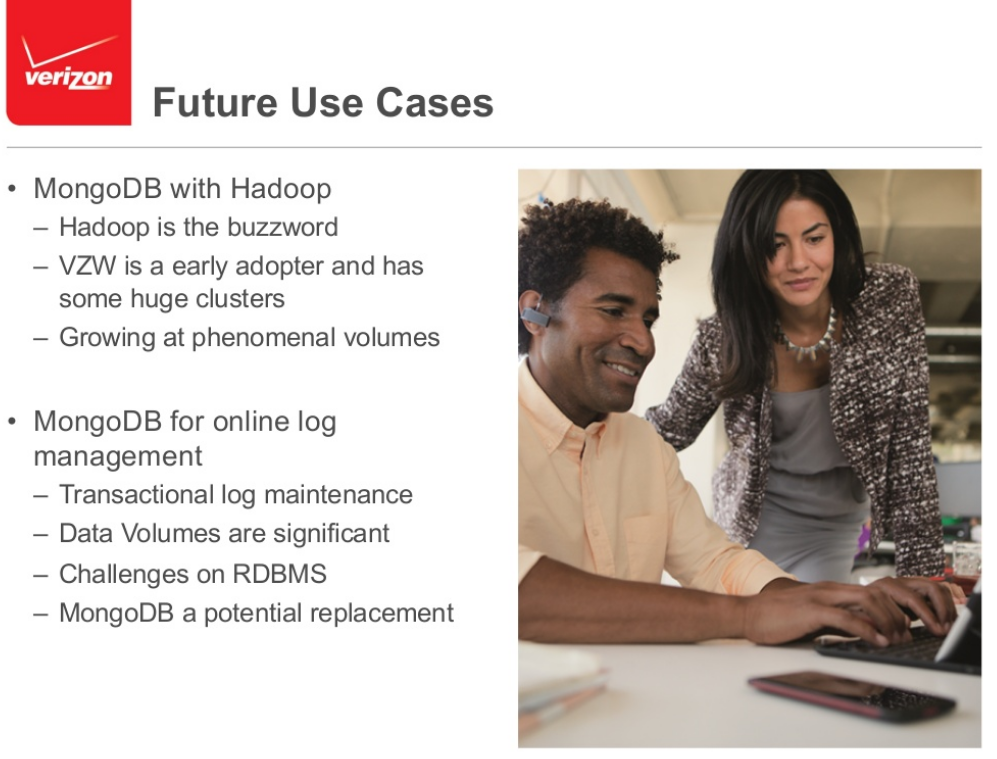 Given Verizon Wireless' data volumes, it also is looking for ways to pair MongoDB with Hadoop to leverage the strengths of both together. The company has been evaluating the MongoDB Connector for Hadoop.

As Verizon Wireless moves forward, Singh notes that MongoDB is appropriate for "quite a lot" of its new use cases, and is therefore being evaluated for these new use cases alongside its traditional RDBMSes. That's a big change for a Fortune 50 enterprise, but Singh believes it's necessary to help the company grow and evolve to meet customer needs..


To view all of Singh's slides:
How Verizon Uses Disruptive Developments for Organized Progress from MongoDB

This past week, MongoDB took a trip to Portland, Oregon for the 16th annual O'Reilly Open Source Convention (OSCON). OSCON is always a great time, with over 4,000 open source enthusiasts in attendance and hundreds of open source projects represented, including MongoDB. MongoDB Engineers Trisha Gee, Jesse Davis, Sam Helman and I all presented at the event and you can find links to our presentations below. One thing we noticed this year: Open Source is no longer on the fringe. Hundreds of organizations such as PayPal, Twitter, HP and Google are investing millions into the creation and maintenance of Open Source software both for internal and external use. These tech behemoths have discovered that Open Source promotes better quality development through transparency, encourages employee retention and builds brand awareness in the tech community. At MongoDB, we want to encourage the adoption of Open Source technologies to make development simple and beautiful. At the MongoDB booth, we offered attendees the chance to win a free trip to Dublin for a MongoDB training in September. We were overwhelmed by the excitement for the grand prize and our limited edition MongoDB Mugs pictured below. We are pleased to award the trip to Thothathri Srinivasan, a Software Engineer at Groupon’s office in Mountain View. While at the training in Dublin our lucky winner will have the chance to visit our EMEA Headquarters in Dublin and have a pint with our Technical Services team. Congratulations on the win Thothathri! Want to join Thothathri in Dublin? There’s still room in our Developers and Data Modeling course the September . If you can’t make it to Dublin, find a MongoDB training near you . We look forward to seeing you at OSCON next year! MongoDB Presentations: Jesse Davis: What is async, how does it work and when should I use it? . Trisha Gee: What could possibly go wrong? Rapid Prototyping with Java and MongoDB . Code samples can be found here . Steve Francia: Using MongoDB with Go and Mgo . Sam Helman: Intro to AngularJS . Code samples can be found here . Francesca Krihely: Let them Be Your Heroes .

Announcing the release of Database Tools separate from the MongoDB Server.