The importance of delivering an optimized customer experience cannot be overstated, especially if your business is high-end retail. For Breuninger, the customer-first approach has been in their DNA for more than 130 years.

When the top German retailer set out to build a new e-commerce platform, they wanted the online experience to match that of walking in to one of Breuninger’s premium department stores. Accomplishing this goal required a feature-rich, high-performance, and reliable database capable of supporting complex data sets across multiple categories.

“Today, our development teams have a lot of independence. We only have a handful of rules about how they design and build applications within their respective business units,” says Benedikt Stemmildt, Lead Software Architect of E. Breuninger GmbH & Co. “It’s not quite a rule that you have to use MongoDB, but you do have to explain yourself if you don’t.”

However, it wasn’t always this way. Breuninger’s previous platform was built on one of the industry-standard product content management (PCM) platforms, which Stemmildt felt was “monolithic and difficult to code for.” Code freezes were common and the underlying architecture was a frequent cause of frustration for an organization striving to adopt more agile processes. 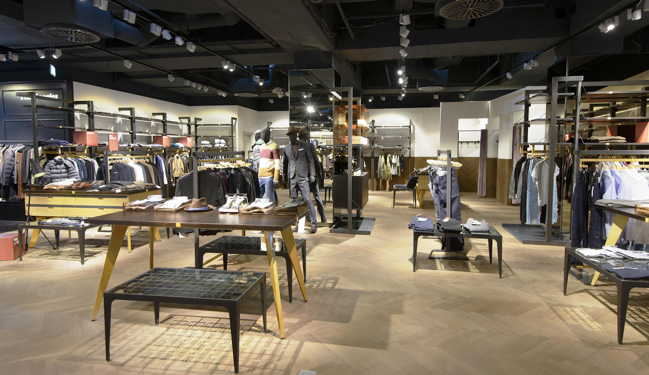 A new development and feature roll-out approach was needed to execute the company’s aggressive omni-channel integration plans, and time to market for new online features became a top priority. Breuninger decided to build a technology group in response, going from 10 to 30 in-house developers in just a year.

“We broke down our monolithic architecture and split our application into separate microservices that reflect how our customers shop in the physical stores,” Stemmildt says. “It’s the customer journey — they search, discover, evaluate, and buy not just individual products, but complete outfits.”

“To reflect this architectural change, we split our development teams by different steps of the customer journey and kept dependencies to an absolute minimum,” Stemmildt continues. “One key to making this work is a high-performance database capable of working easily with data in lots of different ways. The document model of MongoDB means we can deliver data with the quality and detail that reflects our products and shopping experience.”

The result? Much faster time to market. Breuninger was able to build their omni-channel platform in months rather than years by enabling teams to decide on important architectural components for their own sections, without having to ask the permission of other teams.

As a seven-year veteran of MongoDB, Stemmildt was confident in recommending the database to his organization. “There are a lot of good databases,” he says. “However, many of them require developers to have a deep knowledge about how they work before getting any benefit. MongoDB is not like that. It’s very quick to learn and start getting results. Our teams are able to deliver features straight away. Once users do expand their use of the database, it’s so feature-rich that you never get a sense of having to push it beyond what it was designed for.”

And agile wouldn’t be agile without automation. “Everything we deploy is automated, and with MongoDB Atlas on AWS, the deployment and management of our databases fit neatly into our processes. After a period of operating MongoDB ourselves on EC2, it’s great not having to worry about the details and not having to spend time setting up, configuring, and managing database[s]. You free up a lot of opportunities to add value to your service by not running things yourself.”

AWS offers a healthy mix of other tools for the teams at Breuninger to leverage, such as a managed Kubernetes service and serverless Lambda functions. MongoDB Atlas and AWS also help Breuninger stay on the right side of the regulators. “We need to comply with GDPR so we keep everything running within our borders. MongoDB Atlas’s built-in security features have helped us satisfy these requirements.”

The finished platform might look different to someone who is used to traditional architectures, but to Stemmildt, not being restrained by legacy approaches makes a lot of sense. “Each of our teams owns one or more sections of the customer journey. The search team updates its own database, pulling data in from the product data producer via a feed and re-populating its own database as needed. We don’t have to ripple refreshes out across the system as they happen. That means each team is free to add new features without changing some core database component and affecting other teams. Self-contained systems are an important design rule.”

And although there are some 25 different and largely independent systems, the customers see just one website. A front-end proxy uses server-side includes to marshal data as required from a mix of micro-frontends before delivering the final composite to the shopper. Product data, product availability, outfit data, price information, navigation metadata — these are all woven together from separate MongoDB databases as the customer goes through the shopping experience online.

Comparing a microservices architecture to a monolithic one revealed to Breuninger that some metrics don’t matter as much as they once did, while others matter more. “With multiple teams developing things so rapidly, I don’t know exactly how much total data is in play. But we are a very metrics-driven company, not just in the technical infrastructure but across the business. We know when a component is and is not working well from both a technical and business perspective, if it needs optimizing for performance, or whether it is delivering value to the business or we need to revisit that aspect of the system architecture.”

While Stemmildt couldn’t comment too much on future plans, he’s enthusiastic about MongoDB’s part in whatever they may be. “We wanted high performance, but most importantly we wanted to be able to add more features. We’re not using MongoDB’s graph database feature yet, but we may be by the end of the year. There are a lot of things we could do with text search, too.”

Other new features — such as multi-document transaction support in MongoDB 4.0 — may also be useful, but in unorthodox ways. “I don’t actually think transactions are needed anymore for our platform,” he laughs, “But there are some teams, like the customer data team, who don’t agree with me yet and won’t use MongoDB because of that. So the release of MongoDB 4.0 will help me to help them make the transition.”

While customers won’t see the nuts and bolts of Breuninger’s transformation to a data-driven enterprise, they will benefit from the company’s newly integrated omni-channel platform, which delivers an improved customer experience and more ways to get inspired.

And to anyone thinking about using MongoDB on their next project, Stemmildt has just one piece of advice: “Use it. Get a MongoDB Atlas account, create a cluster, and play with it. The way we see it, after the majority of our teams have naturally adopted MongoDB, if you can’t say why you should use another database, then you should just use MongoDB.”

The MongoDB Summer ‘18 Intern Series: Back to Back

Haley Connelly is a 5th year Computer Science Major at UT Austin, and a two time MongoDB Summer Intern. Haley first joined MongoDB during the summer of 2017 as a rising senior. She has made her return to MongoDB for Summer 2018, as she works on her thesis in computational neuroscience. In her short time here, Haley has been able to make a giant impact, including being part of the team that helped build the storage engine used in the MongoDB Mobile product , which was released at MongoDB World 2018. Andrea Dooley : How did you first learn about MongoDB? Haley Connelly : I actually interviewed with MongoDB before I really knew what the company did. That year, instead of taking a summer internship I did a 6 month co-op, which is essentially a full time role, in the spring. My mentor had great things to say about the MongoDB Query Language (MQL), and even wrote a wrapper around an existing ORM to mimic MongoDB-like query capabilities. After I learned how useful MongoDB could be, and once I figured out I wanted to be a Systems Engineer, I re-interviewed with the company, which was really exciting. AD : Can you provide insight to your first summer at MongoDB? HC : I worked on the Storage Team, and helped engineer the mobile storage engine. I was part of the team took the design and architecture from the ground up. It was really exciting because MongoDB Mobile was announced at MongoDB World 2018, and the storage engine is now in beta. We tried to build as much functionality as possible during that summer, and it was great to see a lot of it made it into the final code. AD : That’s a huge accomplishment! Did you know that was going to happen? HC : At the end of the summer, all interns are required to give a presentation on their work from the summer. My partner and I received a lot of positive feedback from our presentation. We got the storage engine functionally working as a prototype, and it worked so well that another intern was actually able to use it. When i came back this summer my old mentor let me know that MongoDB Mobile was about to be released to beta testers. AD : What are you working on this summer? HC : This summer I’m working on the Query team, and am using Haskell, which is a functional programming language to help model the semantics of the MongoDB Query Language. The model is intended to help further optimize behavior for future versions of MQL. AD : What made you want to come back to MongoDB for another internship? HC : I’ll admit I was always against doing two internships at the same company. I thought it was best to try things out in order to know what you like and what you don’t like. But I figured out what I wanted in a company, and I found that in MongoDB. AD : What in particular were you looking for in a company? HC : MongoDB has the name recognition and is well respected in the developer community, alongside a great company culture. It’s also the perfect size company in that it’s not so large that your work seems like it doesn’t make a contribution. We are constantly promoting people to take risks and be intellectually honest, and that really shines when working with people day to day. AD : What about the internship program itself? HC : The fact that we get to choose what we want to work on is so awesome to me. I knew there were other teams I wanted to try out, and I knew wherever I wound up I would be able to make a genuine contribution. AD : It sounds like you’ve gotten a lot out of your internship here. What advice would you give to someone who might be interested in interning at MongoDB? HC : You get to work on things that matter. I’m very interested in lower level, technical work, which is hard to find as an intern. But MongoDB has provided me with the opportunity to do some real problem solving and figure things out strategically. Here you get to figure out the problems and work towards a solution, and in my opinion that’s really valuable. To learn more about the MongoDB internship program, click here .